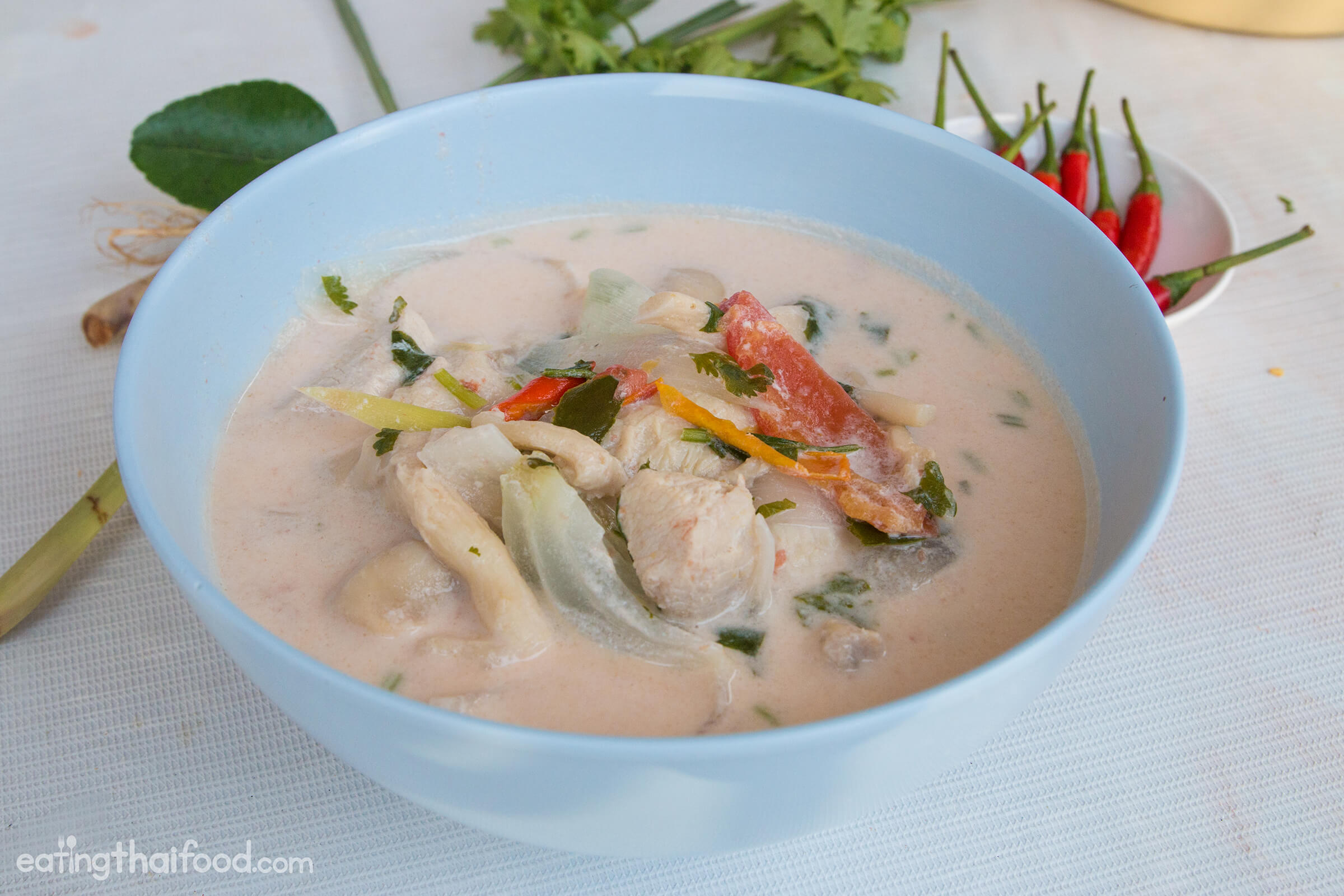 Along with tom yum goong, tom kha gai (ต้มข่าไก่) is one of the most famous Thai dishes.

In Thailand, tom kha gai (ต้มข่าไก่) is eaten more like a curry instead of a soup, paired with a plate of rice and spooned onto your rice before eating it.

In this blog post I’m going to share with you a step by step tom kha gai recipe, the way you will find it in Thailand.

Some of the ingredients you’ll need

The ingredients for this tom kha gai recipe (ต้มข่าไก่) are quite simple, but it’s the method of preparation, especially for the coconut milk that is the important part. 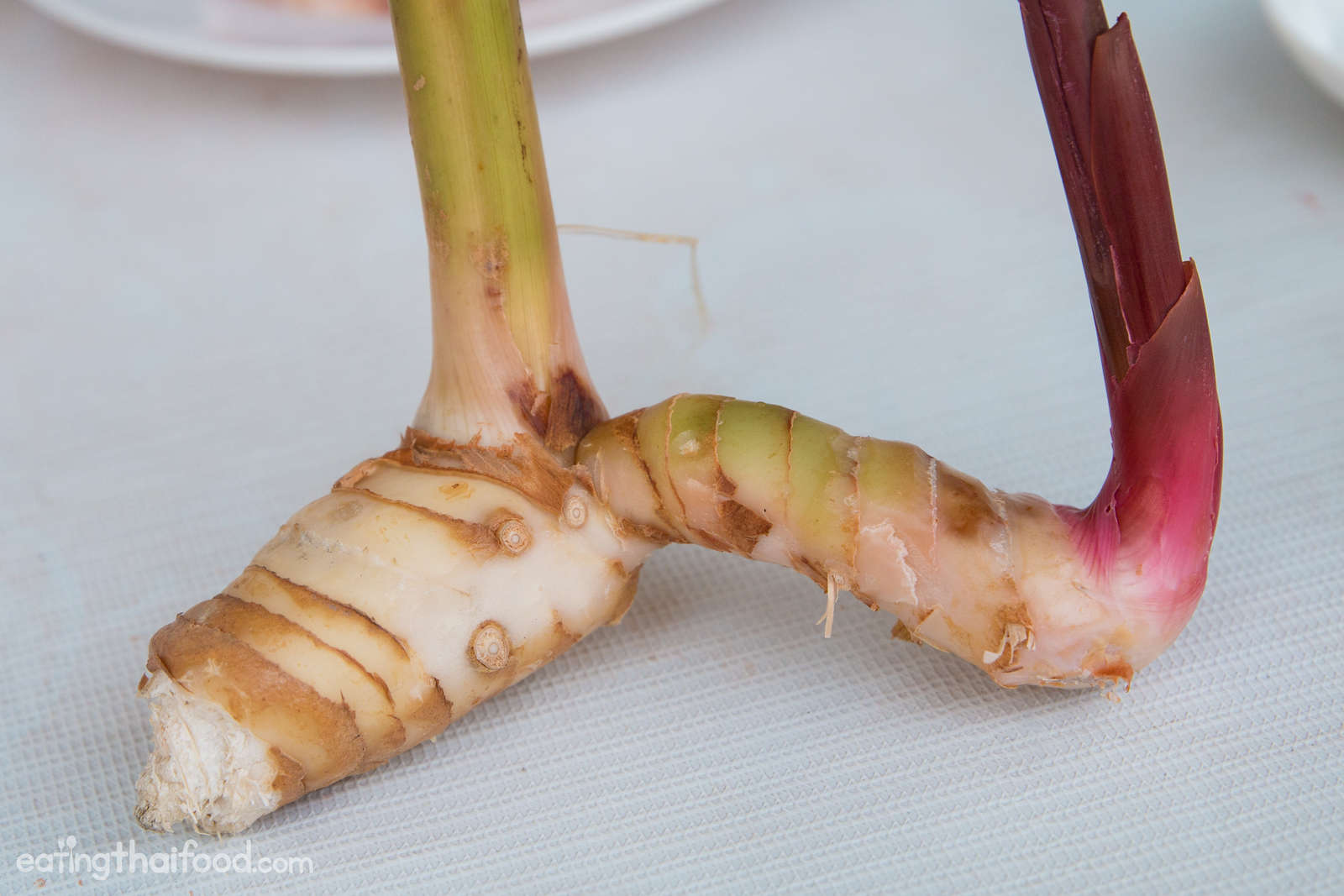 Galangal is a rhizome

Galangal (kha ข่า) is one of the most important ingredients in any tom kha gai recipe (ต้มข่าไก่). The kha in the name of the dish in Thai, actually means galangal – so it’s very important, and there’s really no substitute for the galangal.

It has an earthy spice flavor, and many people compare the taste to ginger, however it’s actually quite different in taste and feel. Galangal is included in many Thai curries and soups, and when used in small quantities, it provides a subtle kick of flavor.

When you cook with galangal, you don’t normally eat the actual pieces of galangal, but instead it’s boiled in the soup to releases its wonderful essence of flavor, and then you either throw it away before eating, or leave it on the bottom of the bowl of soup. 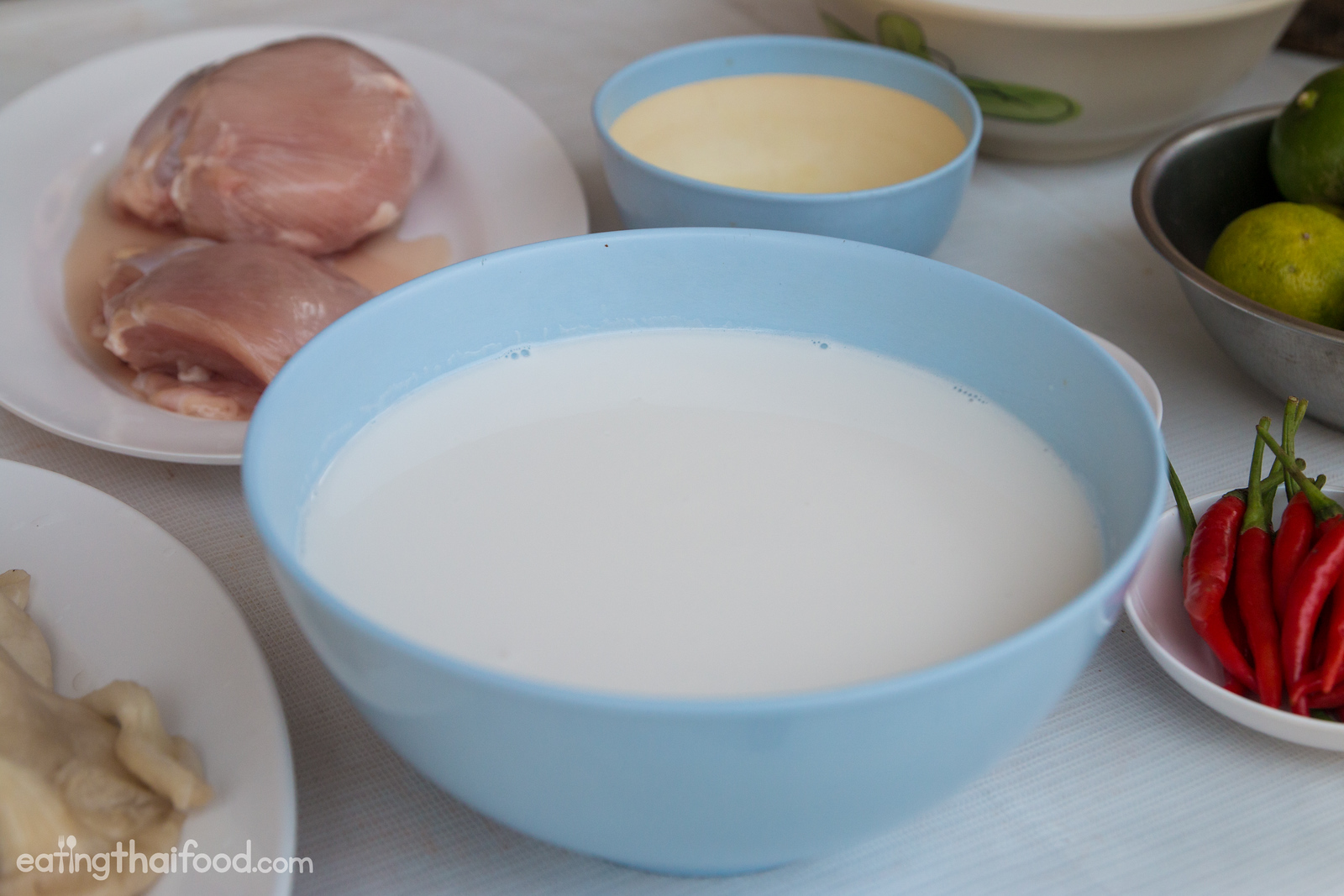 If you can get fresh coconut milk, that’s the best for this recipe

The base of any tom kha gai (ต้มข่าไก่) is coconut milk (น้ำกะทิ kati), and you couldn’t make this amazing Thai soup without it.

Since I made this recipe in Thailand, I was able to use freshly squeezed coconut milk. If you have an opportunity to use fresh coconut milk, the flavor will be by far the best.

However, if you can only get cans or boxes of coconut milk, this recipe will still work well. My preferred coconut milk is Aroy-d in the box, not the can. I’ve found it to have the best flavor and be the most similar to fresh coconut milk. 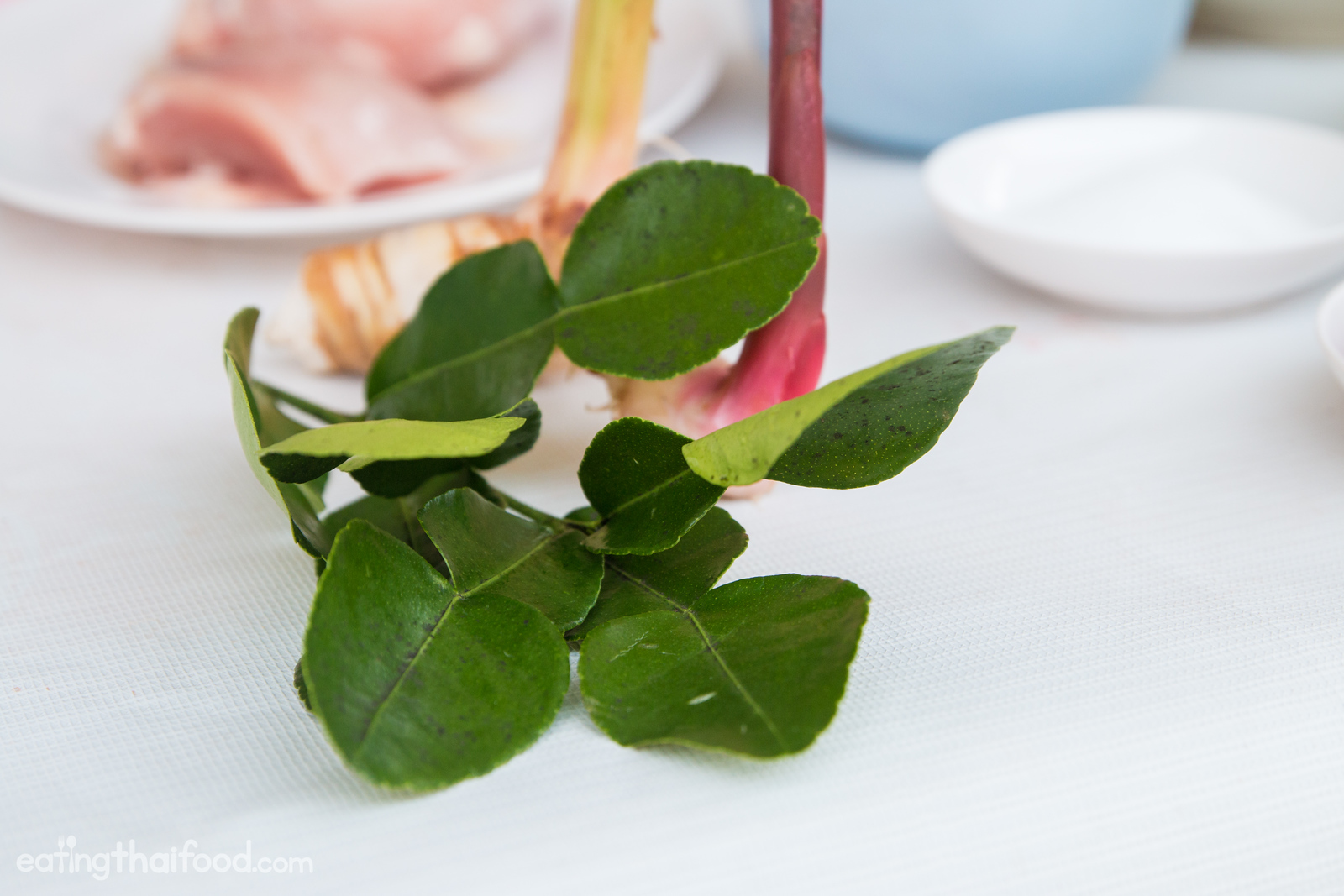 Similar to galangal, you don’t actually eat the kaffir lime leaves, but you boil them in the soup and they release their wonderful citrusy zest of flavor. 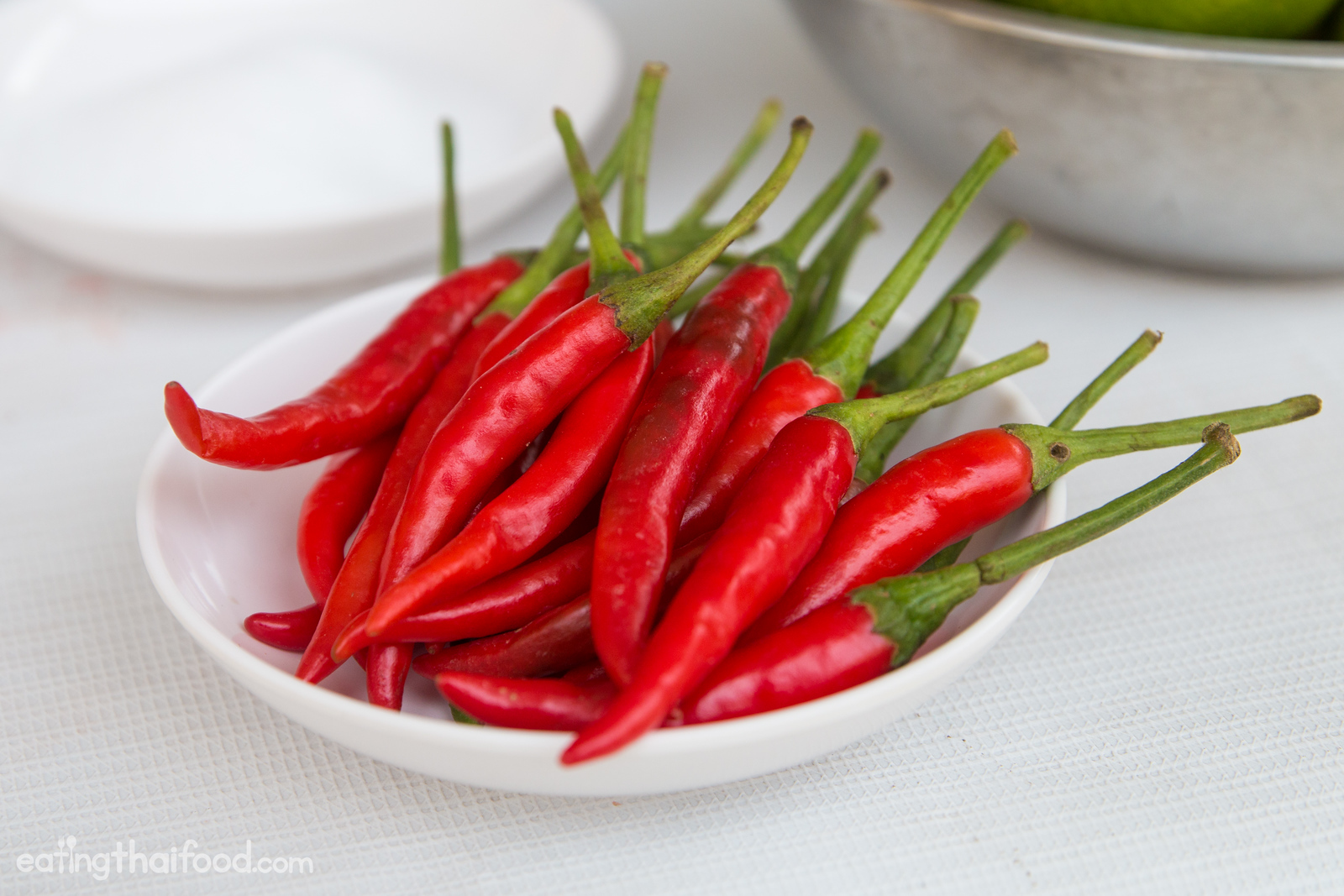 Like nearly all Thai soups and curries, this dish contains Thai red bird chilies. You can really use as many as you like for this recipe, but I would suggest about 5 – 10, or however many you like.

Tom kha gai (ต้มข่าไก่) is not like southern Thai gaeng som, which is supposed to be extremely spicy. Instead it’s typically a very mild dish in Thailand.

Tom kha gai (ต้มข่าไก่) is almost always made with chicken, sometimes bone in or boneless (I’m going to be using boneless chicken for this recipe), and often mushrooms are another main component.

I like to use oyster mushrooms (hed fang เห็ดฟาง) because they are nice and meaty and soak up so much of the delicious flavor from the coconut milk, but you can use whatever mushrooms you can get you hands on.

Finally, to give your tom kha gai (ต้มข่าไก่) a sour component, lime juice (manao มะนาว) is the beautiful final fresh touch to this recipe.

Little Thai limes or key limes are typical for this tom kha gai.

How to cook using coconut milk

One thing I’ve learned while living in Thailand and cooking Thai food is that coconut milk is a very delicate ingredient (especially fresh coconut milk).

Whenever you make a recipe that makes use of coconut milk, you need to stir it gently, and keep stirring it in the same directional flow (I’ve explained why better in the video).

If you stir coconut milk too fast and rough it will sort of start to clump or curdle, similar to the way cream or milk does when you boil it. So just remember to treat your coconut milk gently and stir it slowly and steadily without boiling it too hard.

(If you can’t see the video, watch it here: https://www.youtube.com/watch?v=kmfstZEB0F8)

Time: About 30 minutes all together
Recipe size: Serves 3 – 4 people, about 2 big sized bowls full
Cooking utensils: medium sized saucepan
Flavors: Creamy and rich
Eat it with: A plate of rice and a few other Thai dishes as well 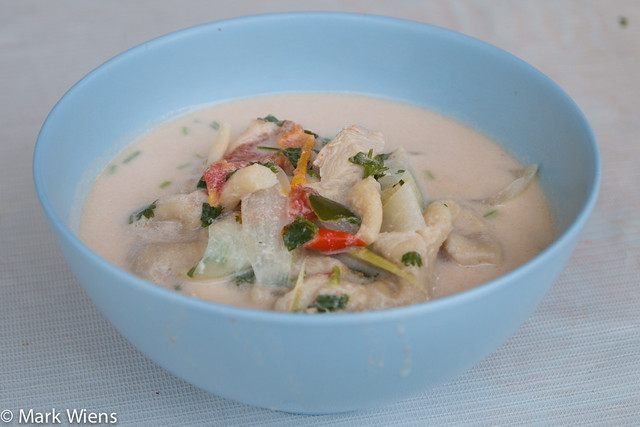 Prep time
10 mins
Cook time
20 mins
Total time
30 mins
Thai tom kha gai (ต้มข่าไก่) is a popular Thai soup, that's eaten more like a curry. The base of the dish is coconut milk, so it's creamy and rich. It's not known as being a spicy Thai dish, but it's still full of delicious and well balanced flavor. Make sure you read the recipe below and also watch the video for cooking instructions.
Author: Mark Wiens (EatingThaiFood.com)
Recipe type: Soup
Cuisine: Thai
Serves: 3 - 4
Ingredients
Instructions
Notes
When you tom kha gai is ready, dish it into a bowl, and serve it with a plate of hot fresh steamed rice. Enjoy! 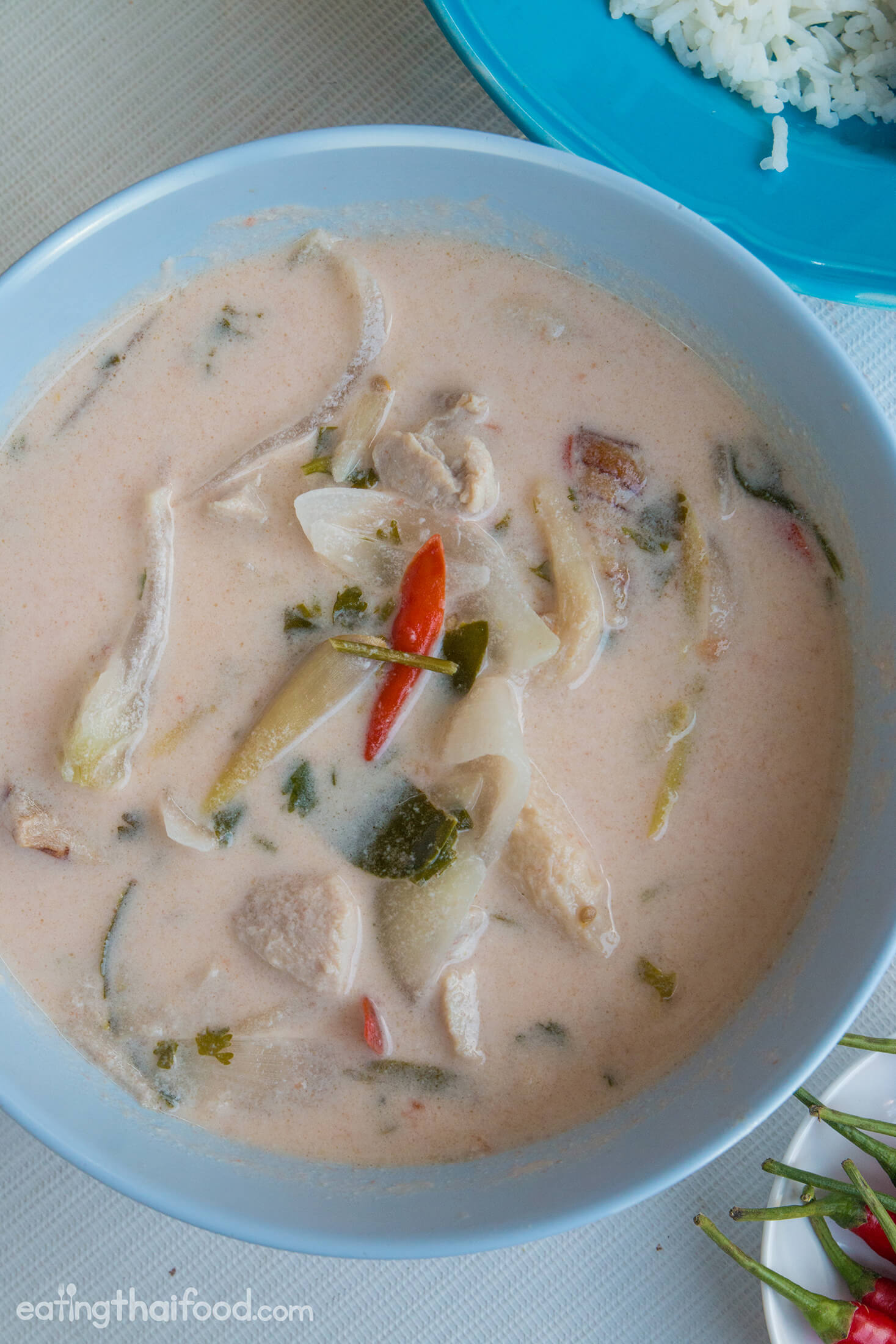 
Tom kha gai is such a simple yet marvelous tasting Thai dish, and it’s sure to be a favorite when you make this recipe and serve it to friends and family.

Dish yourself out a plate of freshly steamed rice, and then take spoons of tom kha gai, combine it to your rice, and enjoy.

Do you like tom kha gai? Try this recipe and let me know what you think.