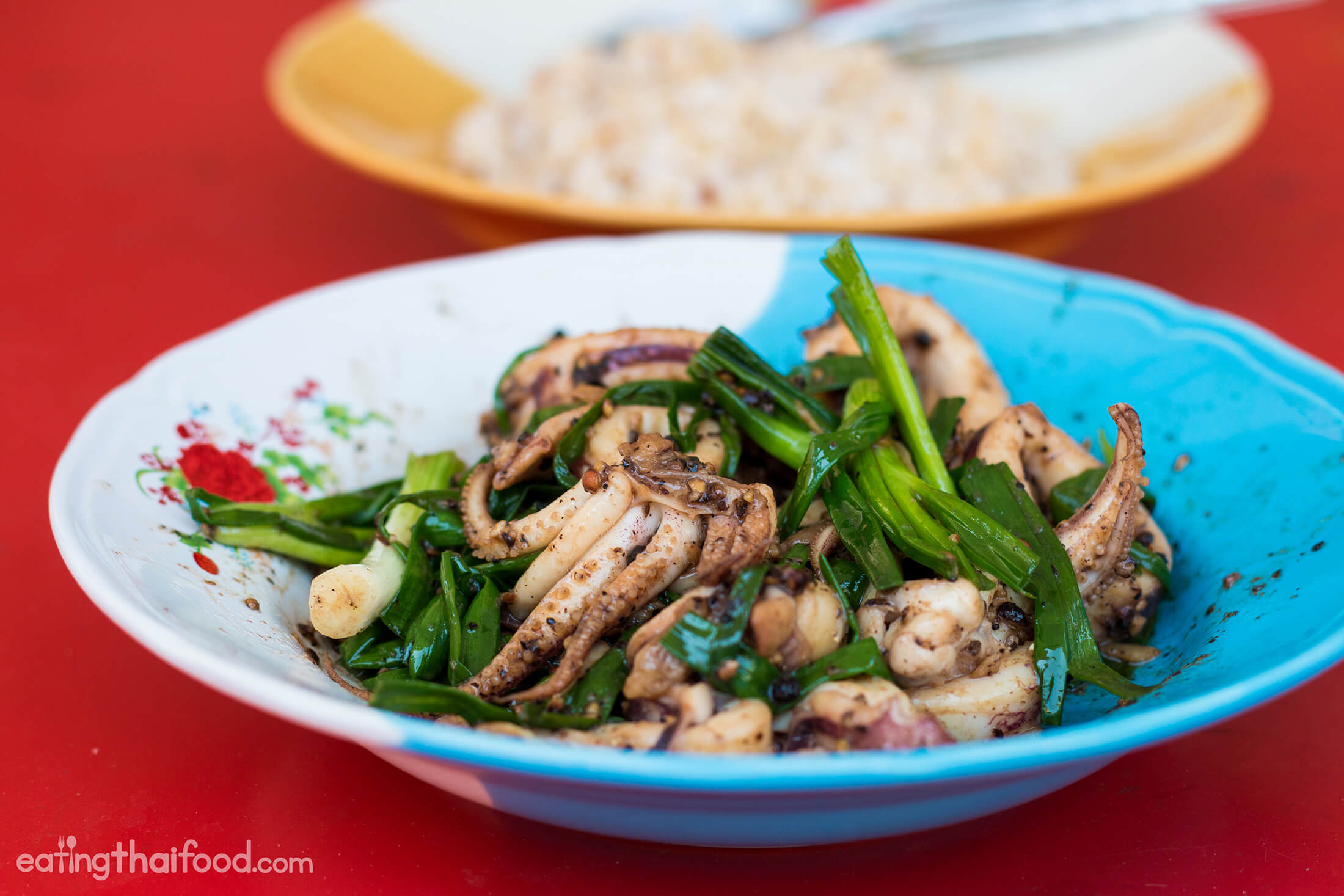 There’s an awesome restaurant in Nakhon Pathom (about 45 minutes outside of Bangkok) called Yee San (ร้านยี่สาร).

Everything I ate at Yee San (ร้านยี่สาร) was delicious, but there was one dish that really stood out to me:

The following recipe was inspired by Yee San (ร้านยี่สาร), and I think it turned out pretty good.

If you like squid, here’s a Thai recipe you should try. 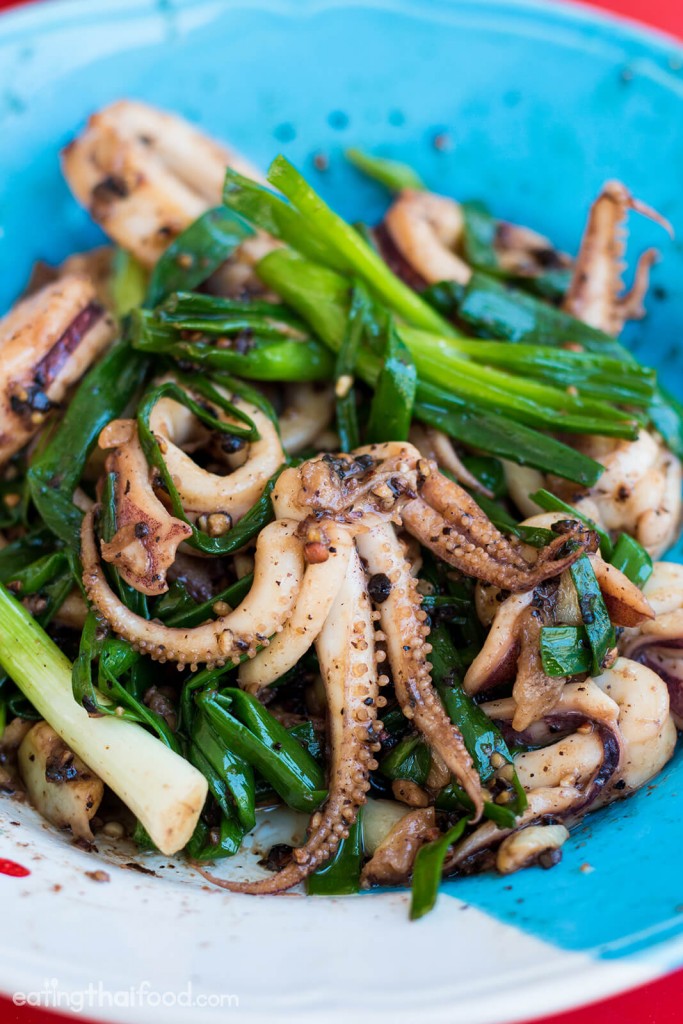 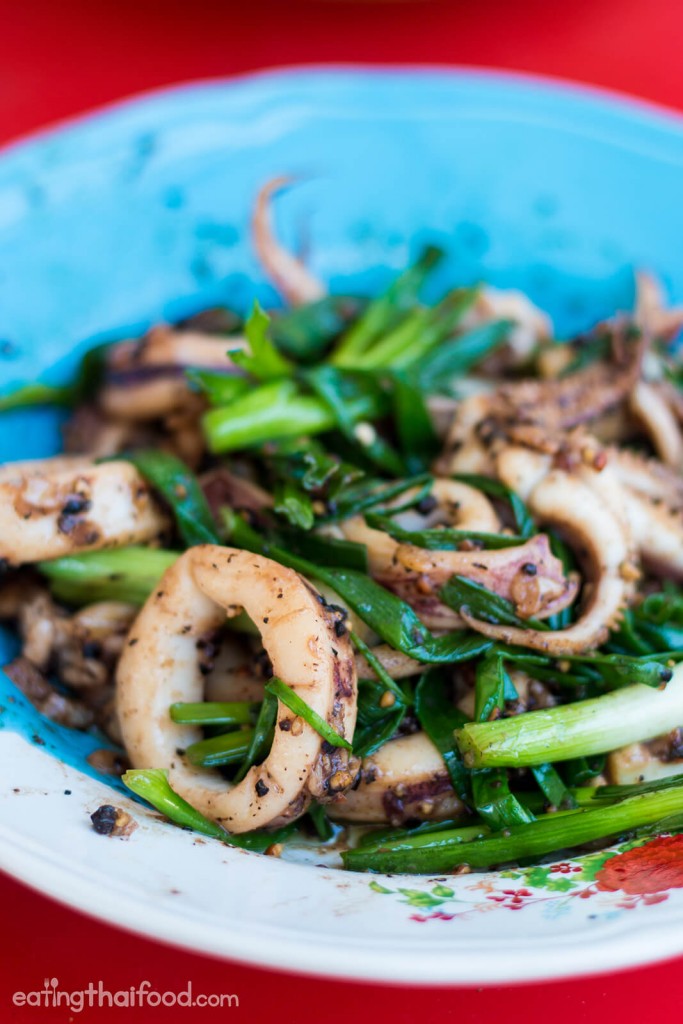 What I love about this dish and recipe is that it’s simple to make, and the ingredients don’t block the flavor or texture of the natural squid, but rather really complement it.

The shrimp paste (kapi กะปิ) gives the squid saltiness, and the flavor that really stands out are the coarse ground pieces of black pepper and the crisp, just lightly wilted pieces of green onion.

Here are the ingredients you’ll need:

NOTE: If you want to get straight to the recipe, scroll down to the bottom and read the recipe box at the bottom of this post. But keep reading this entire post for more photos and a more in-depth explanation of this recipe. 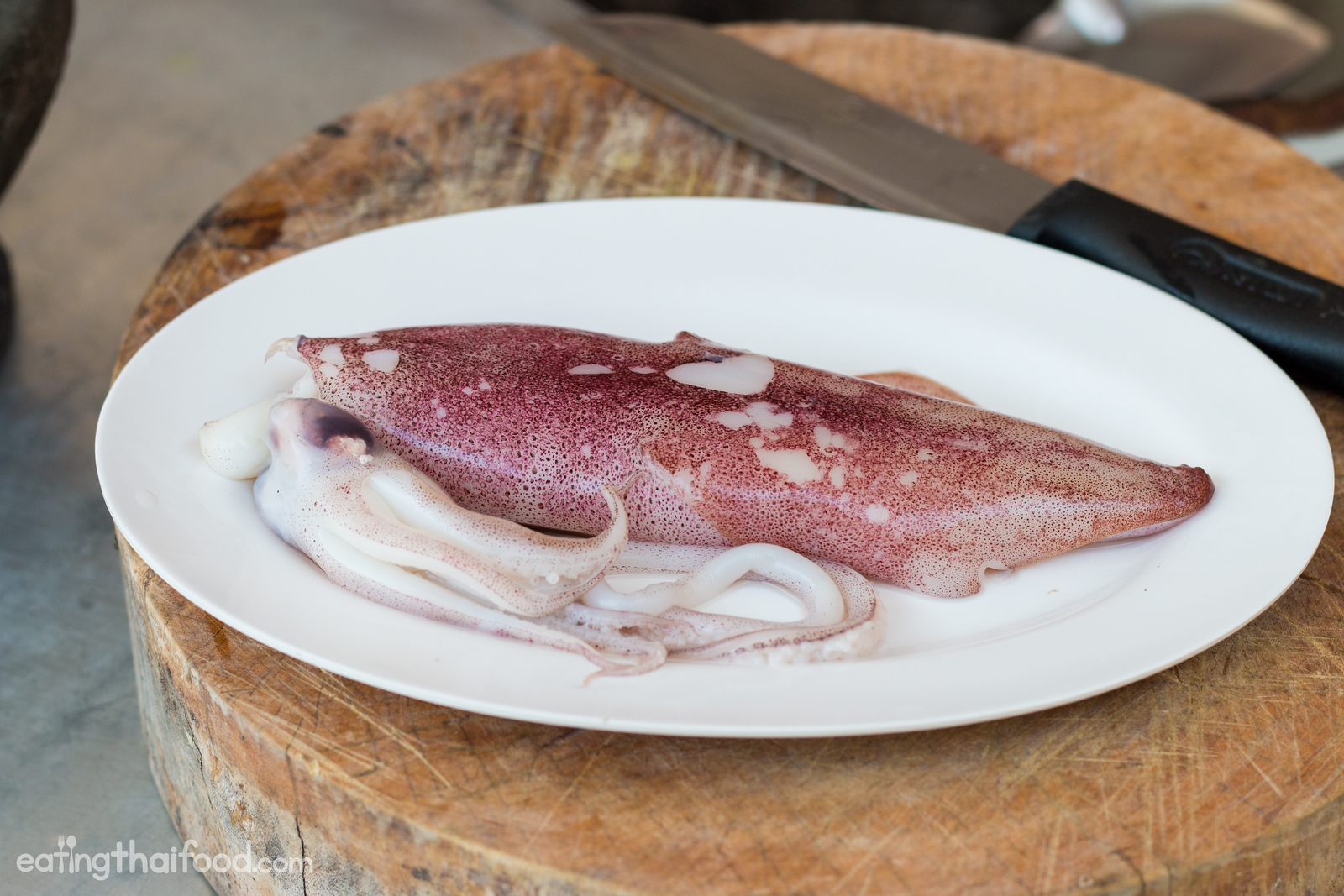 Squid is the main ingredient!

This recipe doesn’t require too many ingredients, but just make sure what you do use are good quality.

Squid, is of course a requirement, though you could make this same recipe with prawns or even crab or another type of seafood, and I think it would work well (though I haven’t tried yet).

I have to say that squid are definitely kind of bizarre functioning creatures, and they are a little interesting to prepare.

First, you want to remove the head of the squid, and slice out the tough eyeballs, and discard them. Then reach into the body of the squid and pull out the cuttlebone, the thing that feels like a piece of plastic.

Make sure you watch the video (below) of this recipe for more details on how to cut and clean squid, or your can also check out this tutorial on Serious Eats.

Give your squid a nice rinse in water, and then slice the body of the squid into rings, like onions rings, and cut the head tentacles into bite sized pieces.

Now set aside the squid as we prepare the other ingredients.

Shrimp paste or krill paste (กะปิ), the same ingredient used in nam prik kapi, is the most essential seasoning ingredient in this Thai squid recipe.

It has a salty taste, and even though it sounds fishy, it really doesn’t have much of a fishy taste in my opinion, but it’s rather almost a salty cheesy flavor.

For this recipe, it’s best to use some nicely aged shrimp or krill paste, and make sure it’s the pretty dry stuff.

Along with whole black pepper corns

This is one of the few Thai dishes I’ve made so far that doesn’t include any chilies, yet it’s still very flavorful.

That’s because the flavor of this dish really focuses on the black pepper, which you should use in a generous quantity so that this dish has an undeniable black pepper flavor – it should be your first when you take a bite – even stronger than the shrimp paste.

Pre-ground powdered black pepper will NOT do for this recipe.

If you have a pepper grinder, put your settings on extremely coarse. But the best case scenario is to have whole black peppercorns, and to quickly pound them by hand using a mortar and pestle, just for a few seconds to crack them open for a fragrant and chunky pepper.

Also for this recipe, you’ll need a whole head of garlic. Peel the garlic, and once you’ve pounded the pepper, just toss in the peeled garlic to the mortar and pound for a few seconds just to break open the cloves.

Alternatively just smash the cloves on a chopping board real quickly. 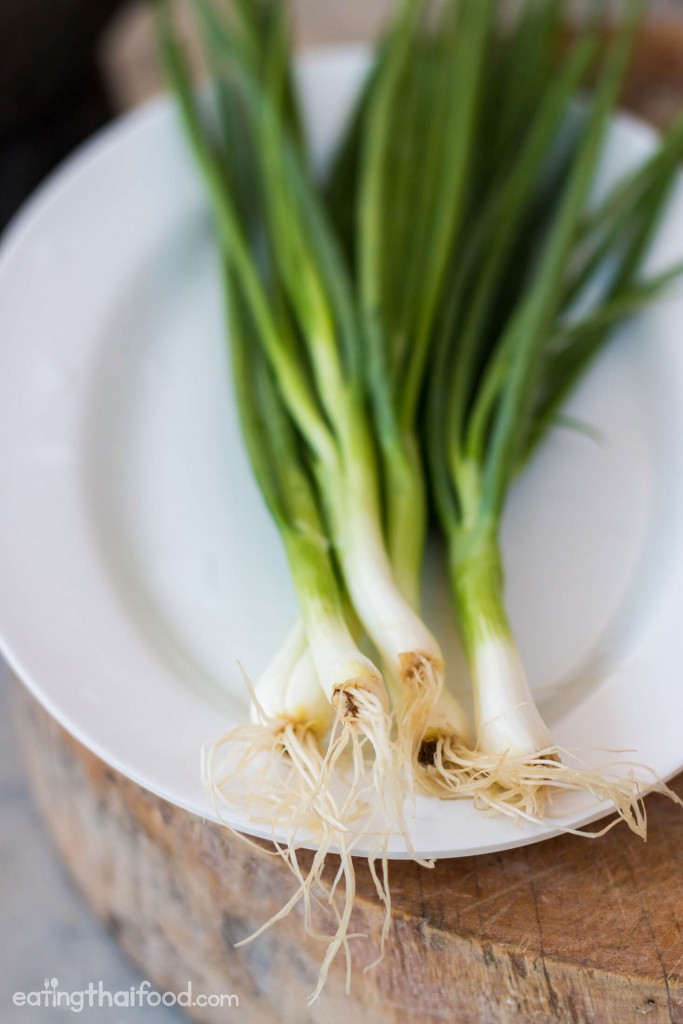 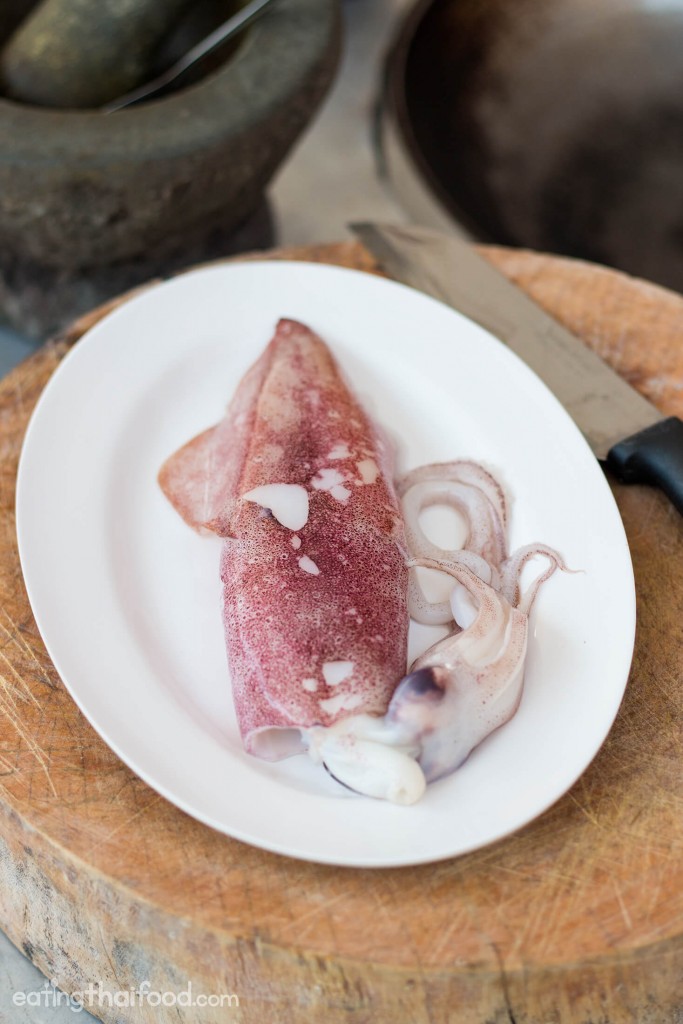 I’ve practiced making meuk pad kapi prik thai dam (วิธีทำ หมึกผัดกะปิพริกไทยดำ) a number of times, and something I found out quickly is that you need to use quite a lot of oil for stir frying – more than I would typically like to use in a normal stir fry.

Make sure you have all your ingredients cut and ready to go – this is going to be a pretty quick stir fry job.

The first thing to do is put your wok or pan on high heat, and add in about 2 – 3 tbps of oil, and allow it to heat.

Once the oil is hot, first go in with the garlic and black pepper and stir fry continuously for just a few seconds.

Then add the shrimp paste, and really work that into the oil and the garlic and black pepper. You may need to use the back of your spatula to make it dissolve into the oil easier.

Once you can see the garlic starting to turn golden, and you can smell the aroma of the shrimp paste, toss in the squid.

Stir fry on high heat for about a minute, and if it starts to get dry, add a splash of water to get things moving.

After another minute of stir frying, season with just a touch of oyster sauce, and stir fry for another minute or so. Make sure your squid is finished cooking, but don’t overcook it, or it will turn rubbery. I probably stir fried the squid for a total of about 3 minutes maximum.

Once your squid is cooked, toss in the green onions, fold into the squid, and immediately turn off the heat or fire of your pan.

You don’t want to cook the green onions for too long or they will lose their fresh crispness. The green onions may look a little raw when you turn off the fire, but don’t worry, they will continue to cook as they sit in the heat of the other ingredients.

Dish out onto a plate, and eat while it’s hot with steamed rice.

(If you can’t see the video, watch it here on YouTube)

Time: This recipe is pretty easy to make, should only take about 20 – 30 minutes from start to finish
Recipe size: Makes 1 squid, I can eat it all myself, but you could share it if you have a few dishes to share at the table
Cooking utensils: Wok or frying pan
Flavors: Salty, peppery
Eat it with: Hot fresh rice

This Thai squid recipe is pretty easy to make, and it really tastes incredible if you love squid.

The subtle saltiness from the shrimp paste, and the harsh black pepper flavor are what really stand out.

If you love squid, give this recipe a try!

What do you think about this recipe? I’d love to hear from you in the comments section below…