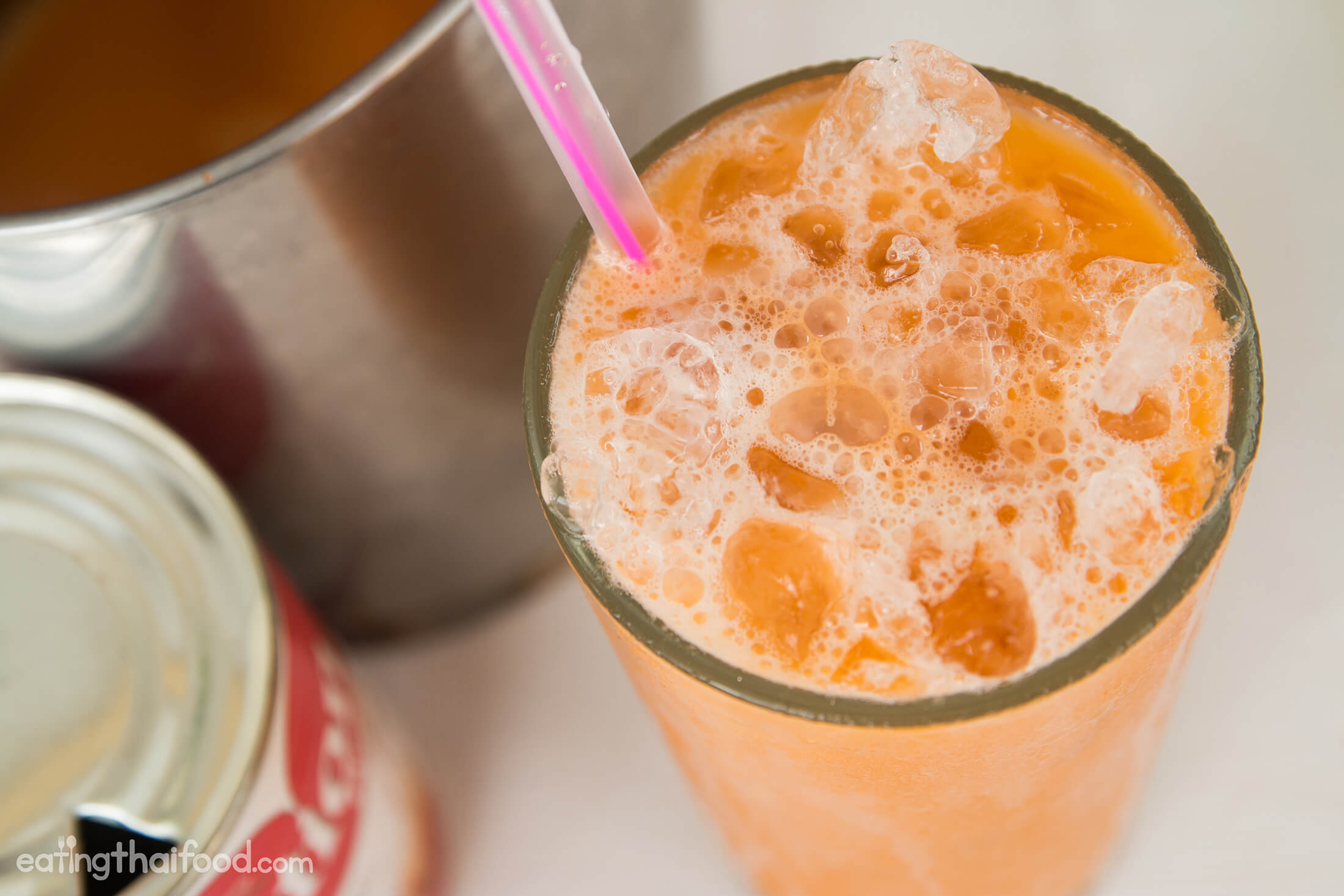 Thailand has produced a number of worldwide famous beverages:

Red Bull and Singha area few of the most well known, but there’s no drink more famous than Cha Yen (ชาเย็น), or known throughout the world simply as Thai iced tea.

This sweet creamy beverage, that hardly even resembles a regular cup of black tea, is loved in Thailand and served at Thai restaurants around worldwide.

If you enjoy sweet and creamy drinks, there’s hardly a more refreshing and drink option available for you.

Many of the cha yen (Thai iced tea) vendors, use a brand of tea that comes in a red and white bag known as Cha Dra Muer (ชาตรามือ) – or it’s just known as Number One Brand.

If not, I think you can make this recipe with any black tea (it just might not have that signature orange color that Thai tea usually has… more on the color below). 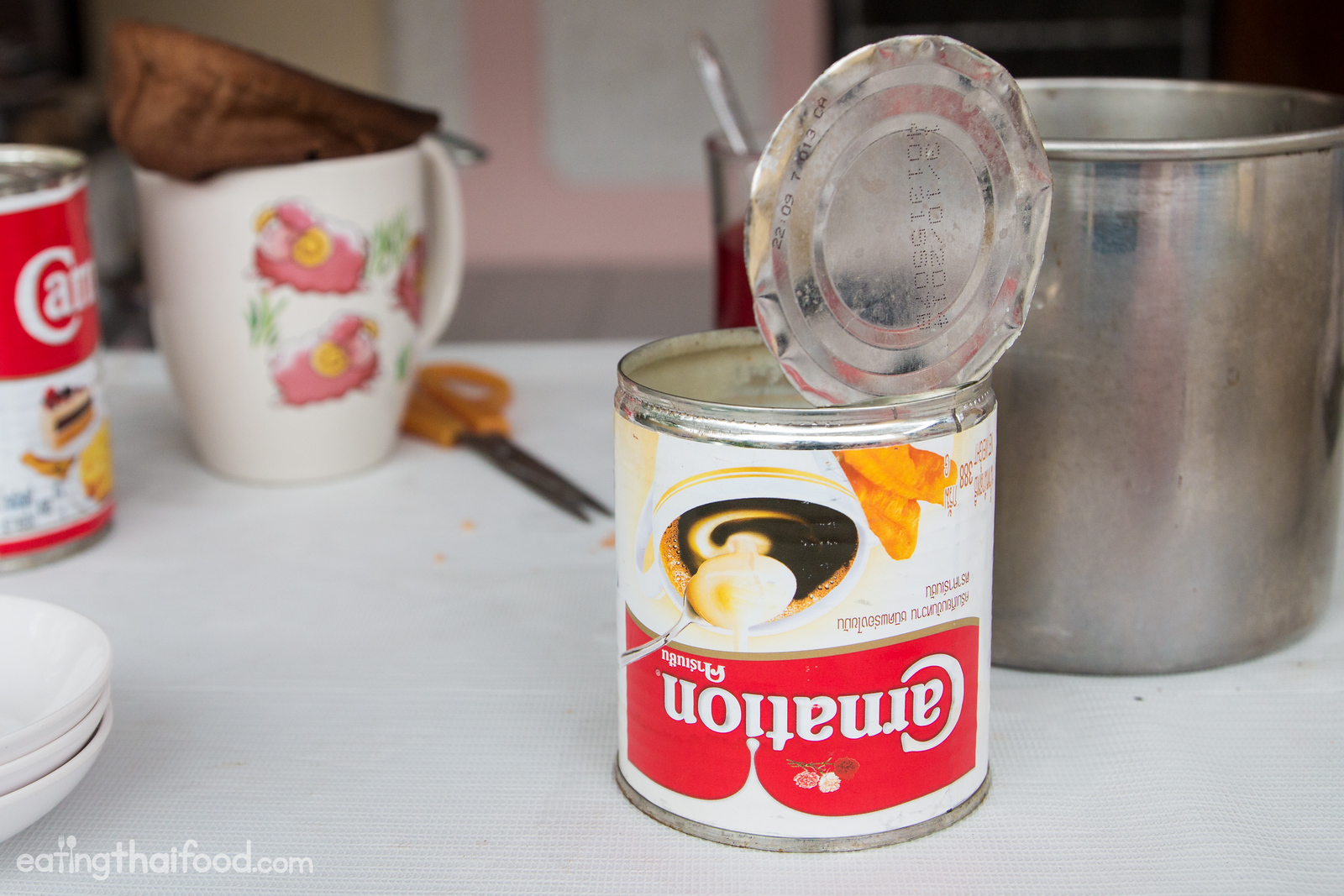 Yes, I accidentally opened the condensed milk from the bottom.

Sweetened condensed milk (nom khon wan นมข้นหวาน) is thick and sweet, almost like a syrup, while evaporated milk (nom kreme tiam นมครีมเทียม) is like heavy cream, and is unsweetened.

Both come in a can, and the most popular version in Thailand is made by Carnation, though there are a number of other brands as well.

Why is Thai iced tea orange?

Why is it so orange?

Have you ever wondered why Thai tea has such an incredibly, and overly orange tone to it?

After I read the ingredients list on the bag of tea, I discovered that it includes some C Yellow Number 6 (which is apparently the same food dye that was in Kraft Macaroni and Cheese, before it got outlawed).

So that’s the secret, it’s not just that it’s really awesome yellow tea, it’s a food dye that they put into the tea leaves (that’s why it’s the same color as Mac and Cheese).

I think you could make this Thai iced tea recipe with any kind of black tea, and it might just not have that orange color, but I think it would taste fine.

But on the streets of Thailand, or if you go to a Thai restaurant and order iced tea, it will always be the orange color. 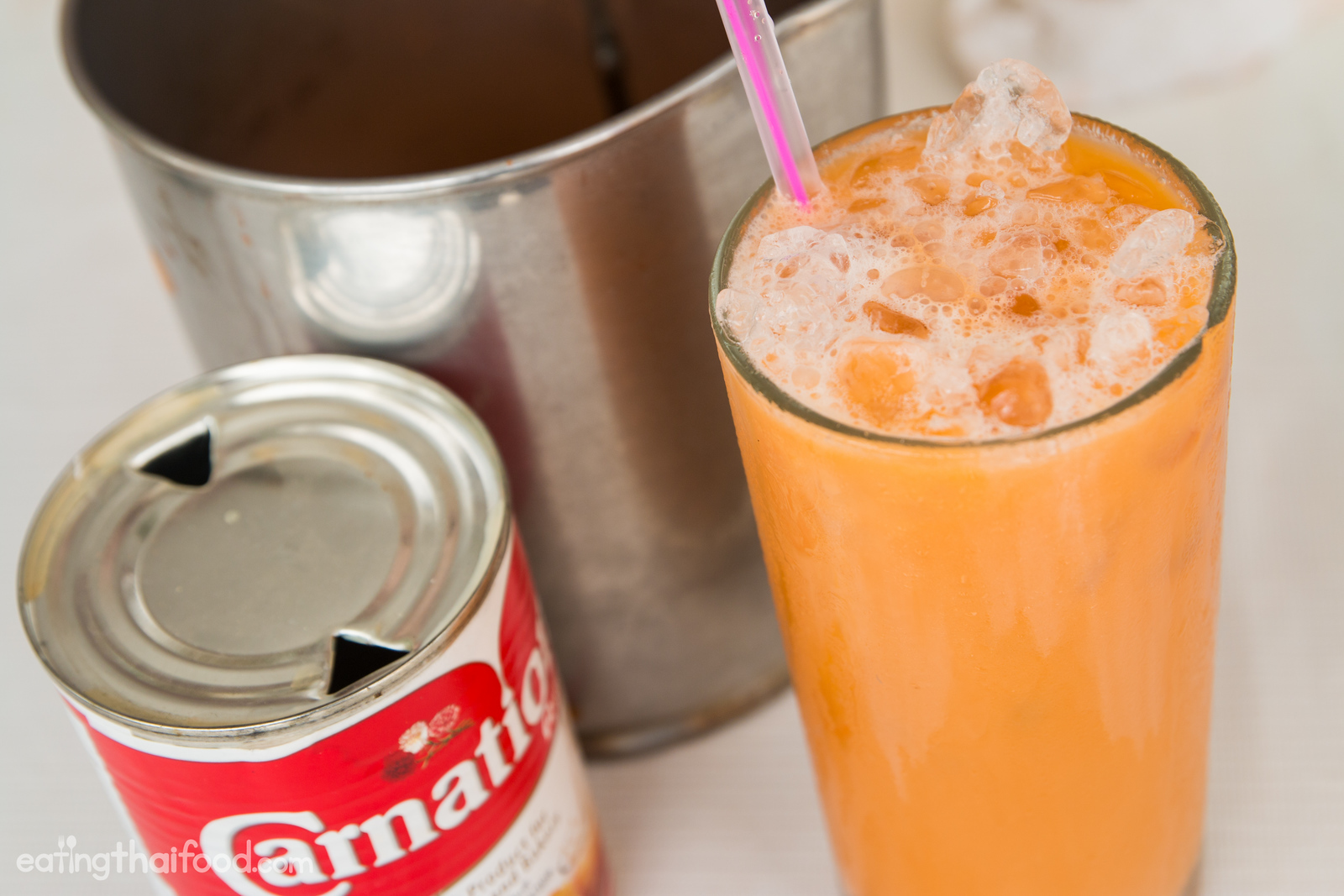 I used about 1 tablespoon of tea leaves for this recipe.

There are a number of different ways you can steep your tea leaves, but the point to remember is you just need to steep them in hot water for a few minutes until you tea is nice and dark orange in color.

I used a tea sock, but you can even just toss your leaves into a cup of hot water, leave it for a few minutes, and then strain out the leaves.

But rather than sticking it into the fridge or freezer and cooling the tea off, it’s instead poured over a cup of crushed ice before being consumed. When you make your tea, if you taste test it when it’s still hot, you want it to be a little stronger and sweeter than you like it, and it will become diluted as soon as it hits the ice.

(If you can’t see the video, watch it on YouTube here: http://youtu.be/ltE9ufnrA-g)

Time: About 10 minutes or less
Recipe size: This recipe is for 1 cup of tea
Cooking Utensils: Cups, spoons, tea sock
Flavors: Sweet drink
Eat it with: Whenever you’re hot and need a refreshing drink 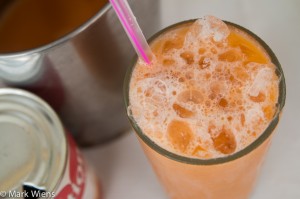 Prep time
5 mins
Cook time
1 min
Total time
6 mins
There are few things on the streets of Thailand more refreshing than a Thai style iced tea. After the tea is brewed, it's mixed with sweetened condensed milk and evaporated milk to make it creamy, rich, and sweet. Cha yen, as it's known in Thai, is famous at Thai restaurants around the world, it makes for a wonderful refreshing beverage. Watch the video recipe here.
Author: Mark Wiens (eatingthaifood.com)
Recipe type: Drinks
Cuisine: Thai
Serves: 1
Ingredients
Instructions
Notes
Thai iced tea is a great sweet beverage on a hot day! Enjoy this recipe! See the full recipe here and watch the video here.
3.4.3177
A really good iced Thai tea should have a little foam and some bubbles on the top, kind of like a cappuccino froth, but not as thick.

One way to get those bubbles, and to really stir up the tea with the milk, is to take two big sized cups, and pour the liquid from cup to the other cup, with a little elevation (see my attempt on the video).

I did end up spilling a bit of the tea, but it sure was a lot of fun.

I still need some practice. 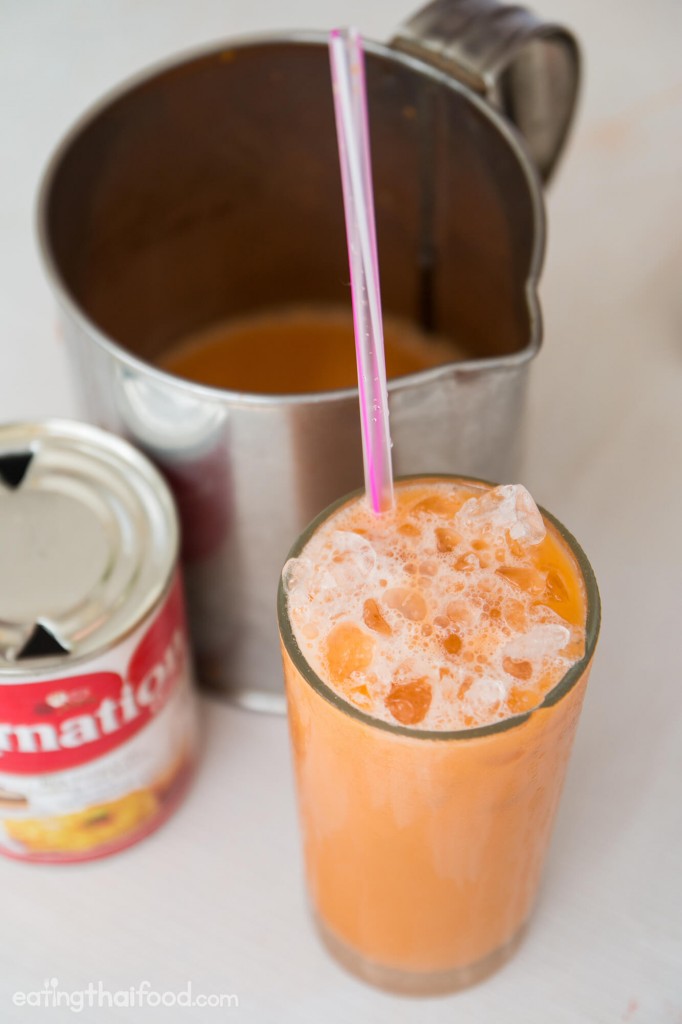 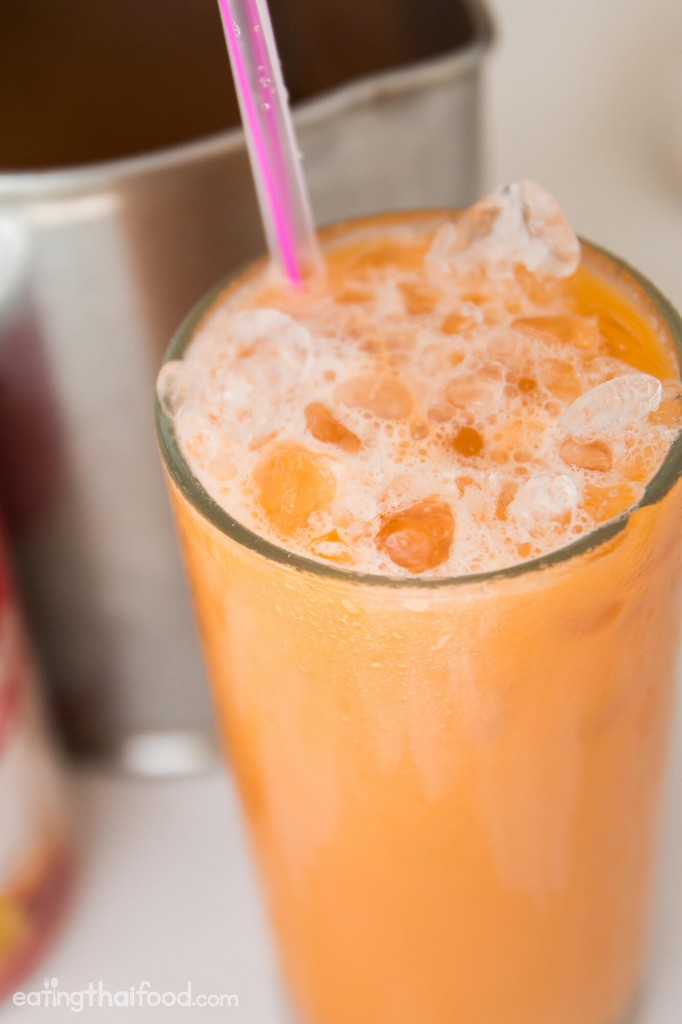 Cha Yen (ชาเย็น) is a very popular drink in Thailand

The final step for this Thai iced tea recipe is to drizzle on a little extra evaporated milk on the top of the glass.

You’ll see the milk slowly trickle down into the orange tea. Give it a quick stir with your straw, and you’re ready to consume and refresh yourself.

One last thing, it would not taste the same if you didn’t use a straw – believe me – I don’t really like straws, but for some reason with Thai milky tea, it just tastes better using a straw.

I hope you enjoyed this Thai ice tea recipe. Let me know what you think and how yours turns out in the comments below!

Are you interested in more authentic Thai recipes? Check out  all my other Thai recipes here.