One of my favorite styles of dining in Bangkok is Khao Tom (ข้าวต้ม).

In the evening, khao tom (ข้าวต้ม), or watery rice soup, is often accompanied by stir fried Thai Chinese style dishes. And rather than the rice soup, what I really love are the stir fried dishes. What is khao tom (ข้าวต้ม)?

Just to quickly explain, before we get started on the food:

Khao tom (ข้าวต้ม) is the Thai word for boiled rice soup. But rather than being like a congee porridge, instead it’s plain steamed rice which is then boiled in water to make it a rice soup.

But when khao tom (ข้าวต้ม) is used in the name of a Thai restaurant, it typically refers to a restaurant that serves all sorts of salty stir fried dishes, plus often some braised Chinese style dishes as well.

And at khao tom (ข้าวต้ม) restaurants you can typically order a bowl of rice soup (khao tom ข้าวต้ม), or they always have plain steamed rice available as well.

Khao tom (ข้าวต้ม) restaurants in Thailand are some of my favorite styles of restaurants / eating – food can be really good, and they are great places to hang out, socialize with friends, and usually have a couple beers… or as Dwight calls them, Thai Izakayas.

Ok, that’s a really quick explanation, let’s get on with the food. 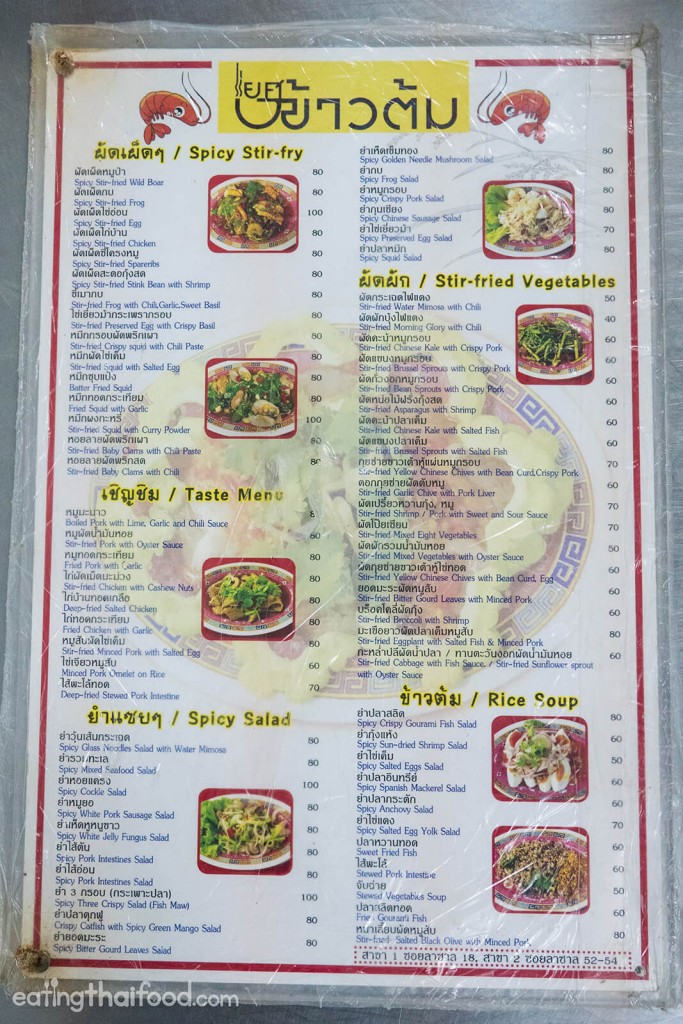 The menu was surprisingly in Thai and English 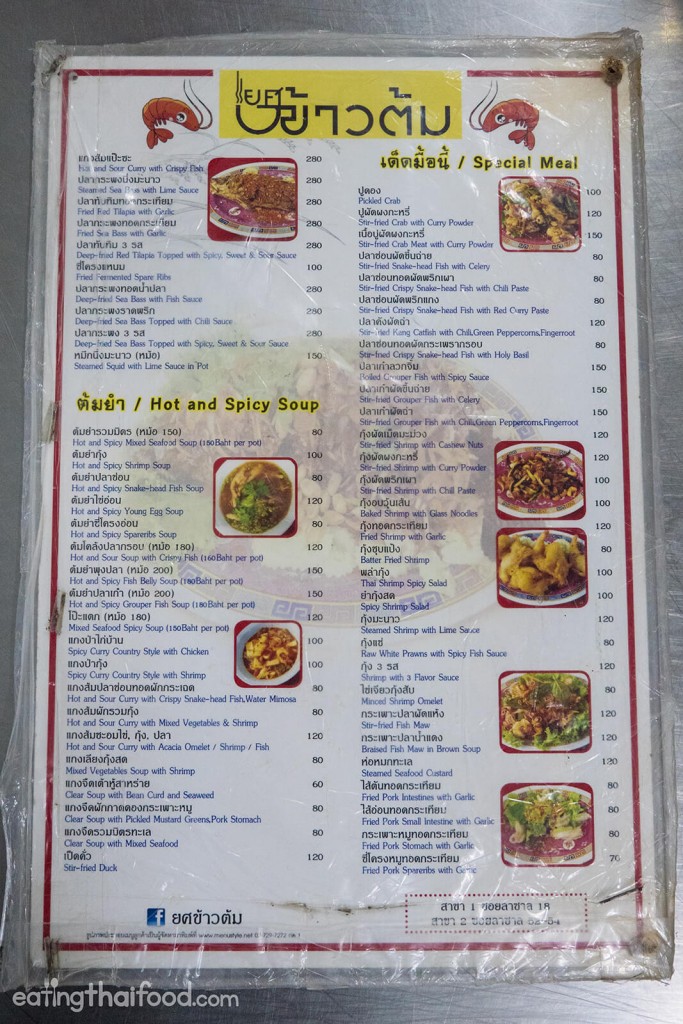 On the menu at Yot Khao Tom (ร้านยศข้าวต้ม) you’ll find all the classic Thai khao tom dishes – the full range of stir fried dishes – seafood, pork, chicken, duck, and the range of different vegetables on display.

The menu is extensive, and surprisingly, it was in both Thai and English. And I though they did a pretty good job at translating the entire menu – not just a few of the dishes like at many restaurants, but everything was translated.

As soon as you arrive at Yot Khao Tom (ร้านยศข้าวต้ม) and begin choosing where to sit, you’ll immediately notice that it’s one of those restaurants that seemed to just grow and grow and get bigger as they went along.

There are about three different indoor rooms to choose from, plus a bunch of tables set out side on the sidewalk as well.

Ying and I went for dinner along with Dwight and Panisha, and I think we sat somewhere right in the middle room. Daohoo song kreung (เต้าหู้ทรงเครื่อง) is a Thai Chinese style dish of stir fried tofu, usually the really soft and silky egg tofu, with minced pork, and any assortment of other ingredients the chef decides.

Along with soft tofu, plenty of minced pork, and green onions, what I really liked about the daohoo song kreung (เต้าหู้ทรงเครื่อง) at Yot Khao Tom (ร้านยศข้าวต้ม) was that it had a wonderful ginger flavor that’s not typically common with this dish. The eggs are fried in lots of oil so they are crispy, and the dressing often includes lime juice, fish sauce, chilies, shallots, garlic, and any other assortment of vegetables and herbs they decide to use.

The yam kai dao (ยำไข่ดาว) at Yot Khao Tom (ร้านยศข้าวต้ม) was alright – what I really liked about it was that it was nice and sour, and filled with sliced onions – but it still wasn’t nearly as good to what I think is the best fried egg salad in Bangkok.

It was still really good though, well worth ordering.

Kai baan is a type of chicken that’s not a free range chicken, but it’s more of a country style chicken – a bit scrawny, and has a stronger chicken flavor.

For the kai baan tod kleua (ไก่บ้านทอดเกลือ), it was cut into bite sized pieces, seasoned with nothing more than salt I think, and then deep fried.

It was alright, not the best plate I’ve had, but not bad.

One of the classic dishes at a Thai khao tom restaurant is nam liab moo sab (หนำเหลียบหมูสับ), minced pork stir fried with a type of salted Thai olive.

The minced pork was fragrant from garlic, and had a nice saltiness from the Thai olives. They also includes a few ivy gourd leaves in the mix, which I really liked.

It wasn’t stir fried quite as dry as I would have liked it though.

The eggplant was my favorite dish of the meal

From the salty preserved fish, it might sound like it had a fishy taste, but really, unless you knew it, you wouldn’t really notice – the salty fish just gave then entire stir fry a lovely salty smoky fragrance.

Along with big slices of tender eggplant, there was plenty of minced pork, chilies, and garlic. Eating bites with rice, or khao tom, it was fantastic.

For our soup of the meal we had tom yum goong (ต้มยำกุ้ง) and we had the creamy version.

It was a little on the sweet side for me, and I’m not a huge fan of the creamy version of tom yum goong (ต้มยำกุ้ง).

But it was alright, and it included a nice mix of good sized shrimp, mushrooms, and thin slices of lemongrass and kaffir lime leaves.

Kai pad met mamuang (ไก่ผัดเม็ดมะม่วง) – not as good as I was hoping for.

Kai pad met mamuang (ไก่ผัดเม็ดมะม่วง), or chicken fried with cashew nuts (yes, cashew chicken), is something I almost never order in Thailand, mostly because it often comes as a ketchupy tasting sweet and sour dish.

For some reason I decided to try it at the kai pad met mamuang (ไก่ผัดเม็ดมะม่วง), I think because it looked pretty good in the photo.

Unfortunately, it was way too sweet and ketchupy. I wouldn’t order it again here.

Anytime I see the words samoon phrai (สมุนไพร) on a Thai menu, I get pretty excited.

Samoon phrai (สมุนไพร) translates to Thai herbs, and so it guarantees something that’s going to be full of herbs and flavors.

Posted somewhere above the hanging TV on the wall at Yot Khao Tom (ร้านยศข้าวต้ม), there was a banner advertising bet khua samoon phrai (เป็ดคั่วสมุนไพร), duck with Thai herbs, and we had to order a plate to give it a try.

The duck was cut into bite sized pieces, and it appeared that it was deep fried, then dry stir fried with a bunch of deep fried garlic, green peppercorns, and kaffir lime leaves.

Along with the eggplant, the bet khua samoon phrai (เป็ดคั่วสมุนไพร), was among my favorite dishes of the evening.

I’m not even sure how many dishes we ordered, but there were four of us, and we ordered quite a lot – including two plates of the eggplant.

Our total bill came to just over 890 THB. So I thought it was a pretty decent price for how much food we ate – all four of us were stuffed after this meal.

The food is salty, some dishes are greasy, plenty of pork and meat is used, and the flavors go so well together with rice.

My favorite dish of our meal was the makua yao pad pla kem moo sab (มะเขือยาวผัดปลาเค็มหมูสับ), eggplant with salted egg, but everything was pretty good.

How to get there: Yot Khao Tom (ร้านยศข้าวต้ม) is right down Sukhumvit Soi 105, in Bang Na, near to Samrong. If you don’t take a taxi directly there, you can take the BTS to Bearing and then catch a motorbike or taxi down to Sukhumvit 105 and on to Soi 18, and the restaurant is on your right hand side.