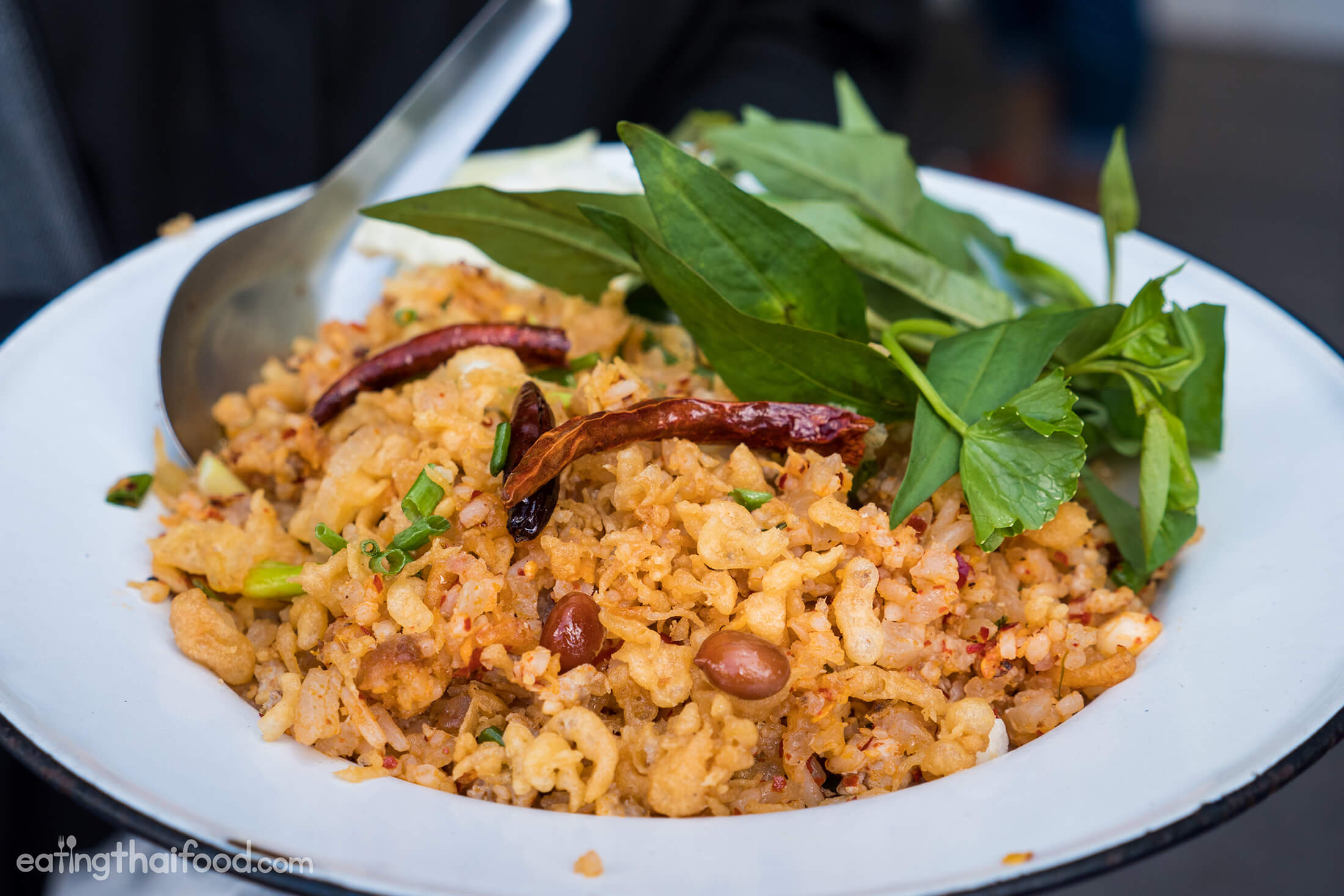 Located in Dusit, on the edge of Sriyan Market (happens to be one of my favorite eating areas in Bangkok) is a street food stall that’s legendary for serving this unique snack. 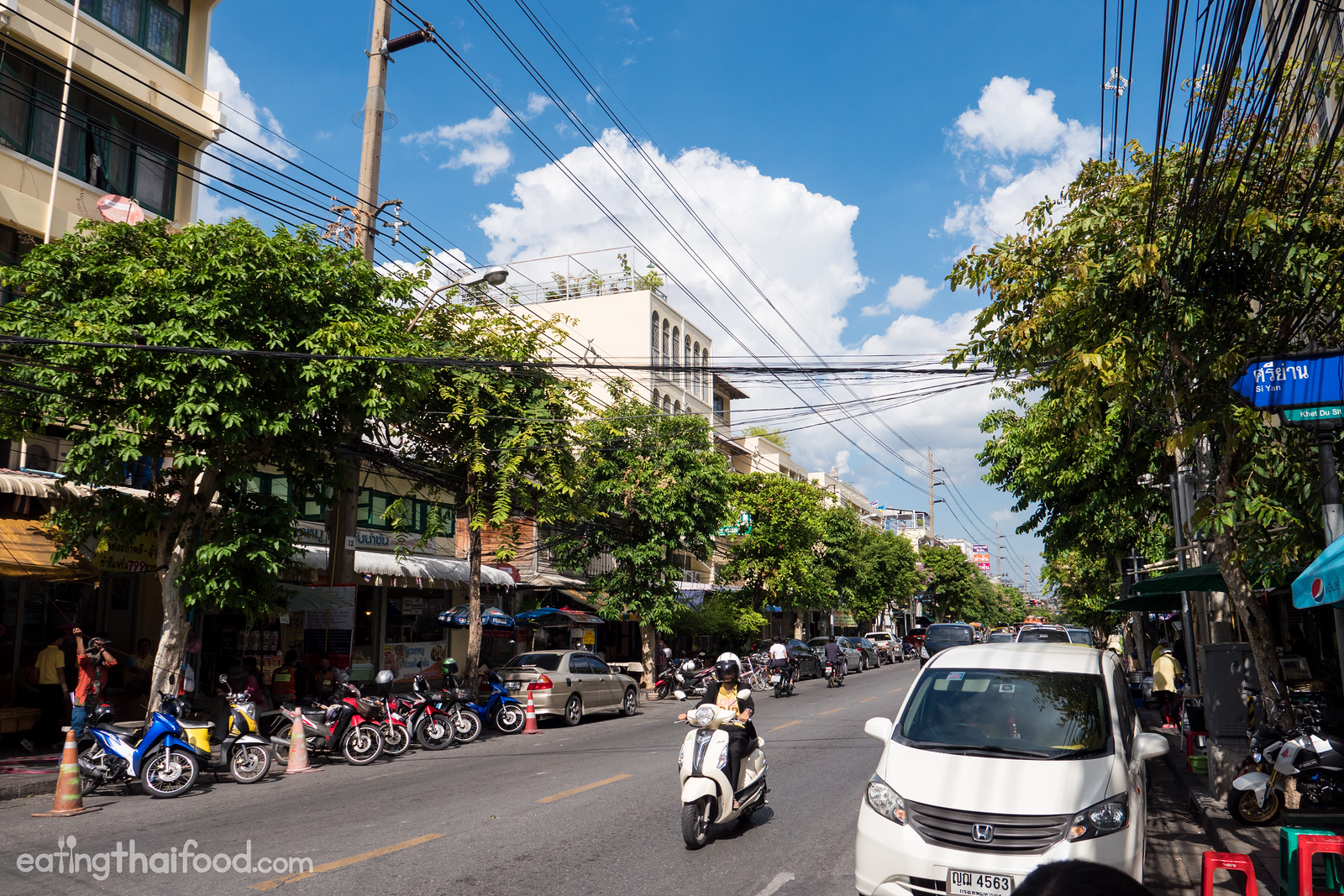 Oftentimes on the streets of Bangkok you’ll notice vendors that sell this dish because they have a tray full of golden colored crispy rice balls that are about the size of billiard balls.

To be honest with you, yam naem khao tod (ยำแหนมข้าวทอด) has never been one of my personal favorite Thai snacks, mainly because I just don’t like the thought all that much of eating pig skin.

But when I tried the version at P’Aor Yam Name Khao Tod (ร้านพี่อ้อ ยำแหนม-ข้าวทอด), I became a convert.

This being said, the average version of this dish that you’ll find on the streets of Bangkok is still not all that appealing to me. 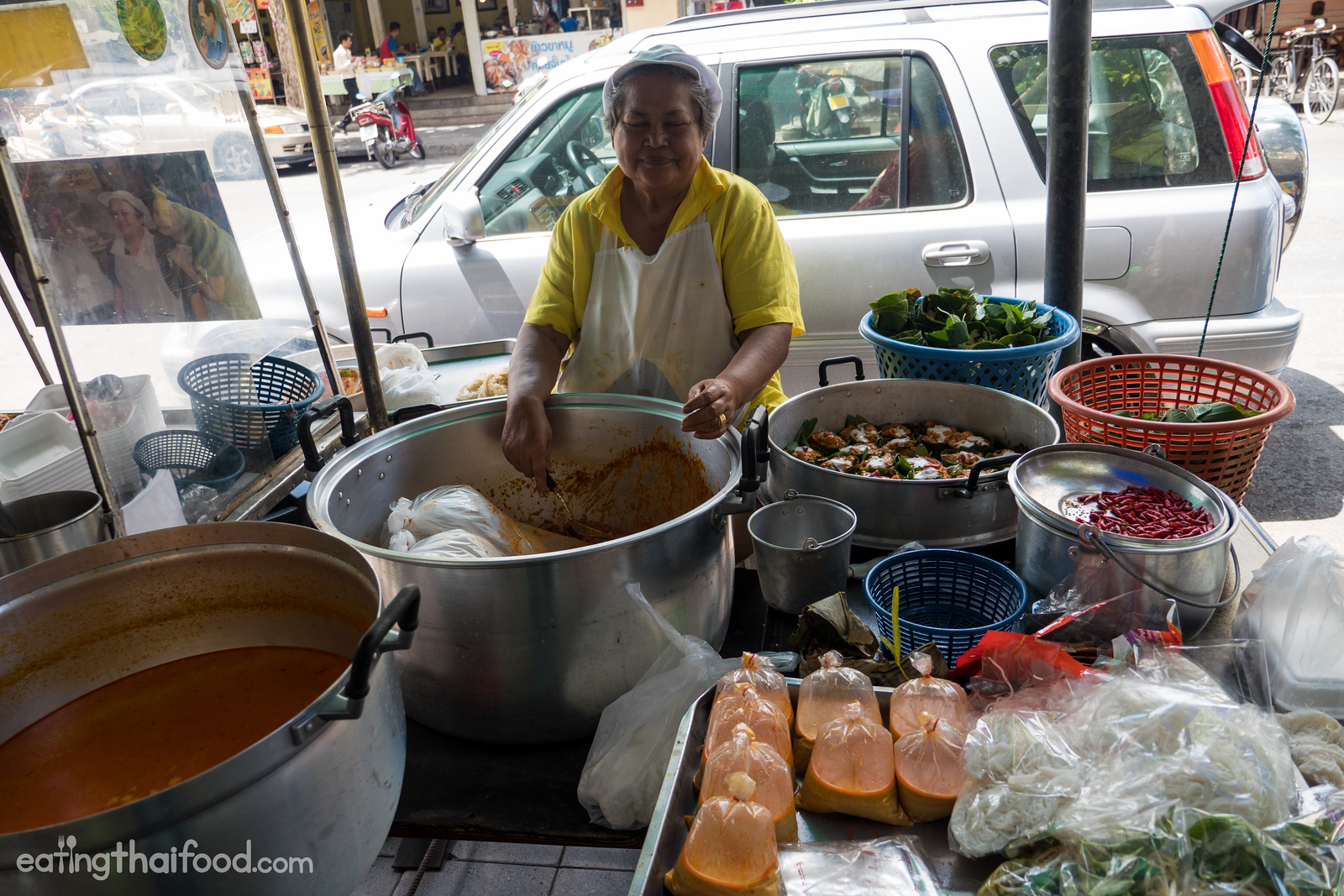 Before we get started, I have to quickly mention that located right next to the yam naem stall is a stall that’s famous for serving Thai fish custard with snakehead fish (haw mok pla chon bai yaw ห่อหมกปลาช่อนใบยอ).

And it’s a traditional version that is magically delicious. It’s something you don’t want to miss when you’re in the area.

Thai fish custard in the making

The mixture of fish, noni leaves, and thick coconut custard and curry paste is all mixed right there on spot, and Mae Boon Ma Haw (แม่บุญมา), the owner of the stall, does it with expertise.

The little cupcakes of fish custard are steamed and are served hot and fresh.

There’s a continual stream of local customers, mostly from the Sriyan Market area, who buy for takeaway.

I ordered a haw mok pla chon bai yaw (ห่อหมกปลาช่อนใบยอ), which is a fish custard with snakehead fish and noni leaves on the bottom (they also had cabbage, but I’d recommend this one).

Along with the one at Nang Loeng Market, this was one of the better versions of haw mok (ห่อหมก) I’ve had in Bangkok that wasn’t home-made.

It was flat-out outrageously delicious.

It was magically good

The fish on the bottom was juicy and un-fishy tasting, the noni leaves had a wonderful nutty taste, and the fluffy egg, coconut cream, and curry paste topping was epically creamy and rich.

I had brought my own spoon, so that’s how I ate it on spot, otherwise most people take it away.

Ok, back to the yam naem khao tod.

BUT, it gets more confusing…

The original Mom started selling yam naem many years ago. Now, in the morning the granddaughter sells, middle of the day the daughter sells, and in the evening the son sells.

And for some reason, they don’t make it together, they all make it separately on their own, however, using their original mothers recipe.

So some Thais say the version from 2 pm – 5 pm is the best, others like the version in the evening. I went at 2 pm, and I’m not really sure if I would be able to tell much of a difference between all three.

All of a sudden a crowd of people appeared

So I arrived at about 1:30 pm and there was no stall to be seen.

But right at 2 pm in the afternoon, the cart rolled onto the sidewalk and out of nowhere a crowd of people immediately appeared.

NOTE: This is exclusively a takeaway street food stall. So I brought my own plate and spoon from home to eat it right then and there. You can take it away, bring your own plate, or just eat it out of the bag if you like. 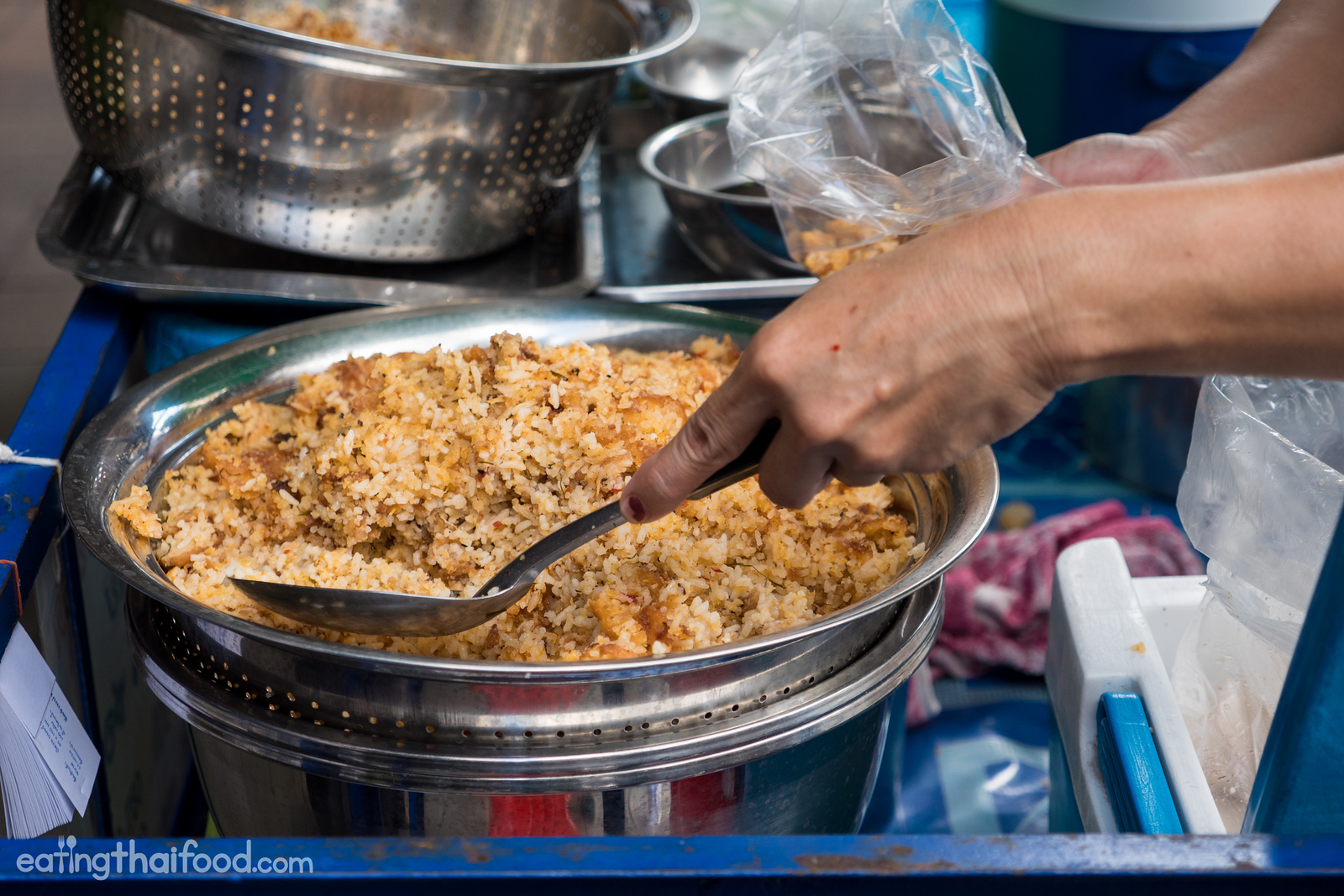 The fried curried rice balls are one of the main important ingredients in yam naem khao tod (ยำแหนมข้าวทอด), and while you’ll sometimes see them in Bangkok whole, in order to save the time crumbling them apart, here they are already broken. However, you can be assured of their freshness.

She started off by adding a couple scoops of the fried curried rice into a mixing bowl.

Then in went a couple scoops of the pork and pig skin mixture.

Then she seasoned the Thai rice salad with fish sauce, lime juice, green onions, chili flakes, and some extra crispy bits, and proceeded to expertly mix and toss the salad using a plastic bag mitten.

Within just a couple seconds she had packed it into a bag and handed it to me. 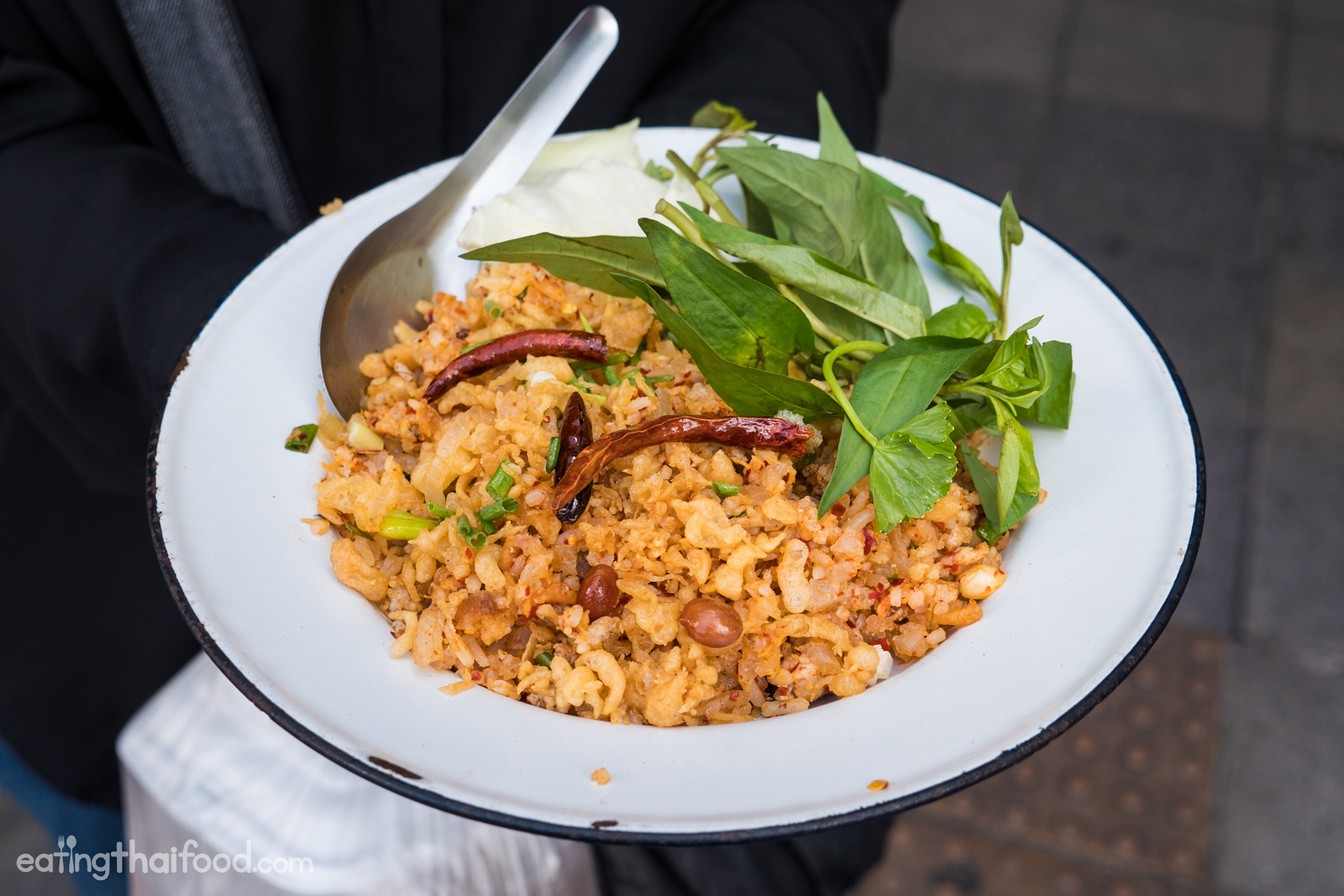 Again, I brought my own plate, so to the smiles of everyone waiting in line ordering, I immediately emptied it out onto my plate.

I took my first bite, and I was amazed at how wonderful her version was. 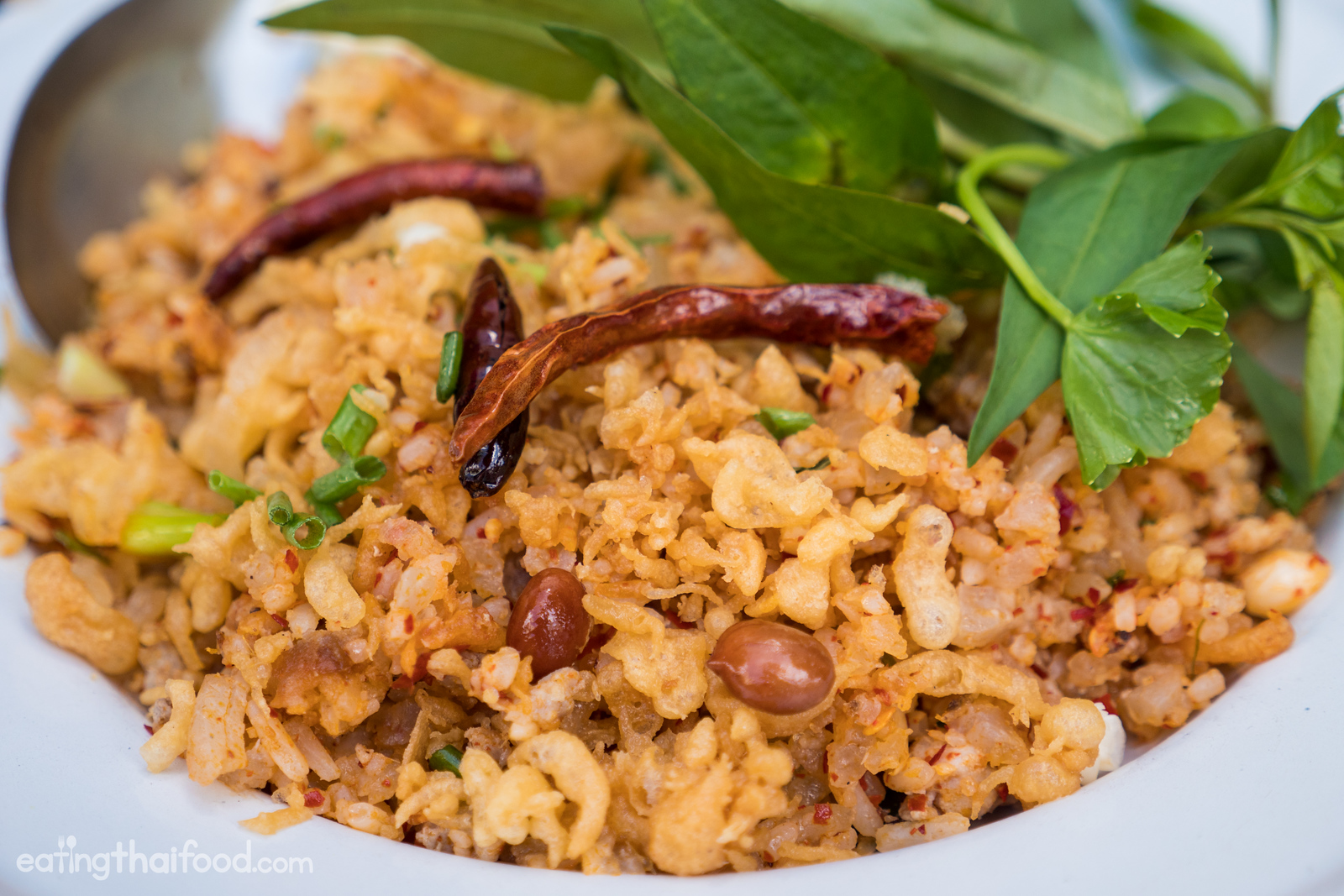 It’s a unique mixture of ingredients and textures

As ironic as it may sound, the pig skin was very light and fluffy, and didn’t really feel heavy or too oily (perhaps due to the way they cooked it and rendered out the fat?).

The Thai yam naem khao tod (ยำแหนมข้าวทอด) was almost like eating a bowl of dry cereal in texture, it was crispy like that. But then each bite was broken by the creamy and melt in your mouth strips of pig skin.

It was spicy from the chili flakes and extra fried chilies, and it was sour from lime juice, with the right balance of fish sauce saltiness.

Every now and then when I needed a mouth cleanser, I would munch on some Vietnamese coriander, which also complemented the bites of the salad.

Again, I can say that yam naem khao tod (ยำแหนมข้าวทอด) has never been one of the Thai street foods I really go out of my way to eat (except for this time), but I’m happy I did this time, because it was truly superb.

Yam naem khao tod (ยำแหนมข้าวทอด) is one of those Thai dishes that you start eating, and before you even realize it, it’s gone.

In the Dusit area of Bangkok

Press play to watch the full video of this amazing street food stall and snack:

(Or you can watch the video on YouTube here)

One of the legendary stalls in Bangkok that serves it, many Thais in the area say it is the best in Bangkok, is known as P’Aor Yam Naem Khao Tod (ร้านพี่อ้อ ยำแหนม-ข้าวทอด).

If you can coordinate the open times, and if you’re a fan of Thai yam naem khao tod (ยำแหนมข้าวทอด), it’s well worth seeking out.

How to get there: To get to this area of Bangkok, it’s easiest to either take a direct taxi there, or take the BTS to Victory Monument, and then jump in a taxi from there. Check out the map here.