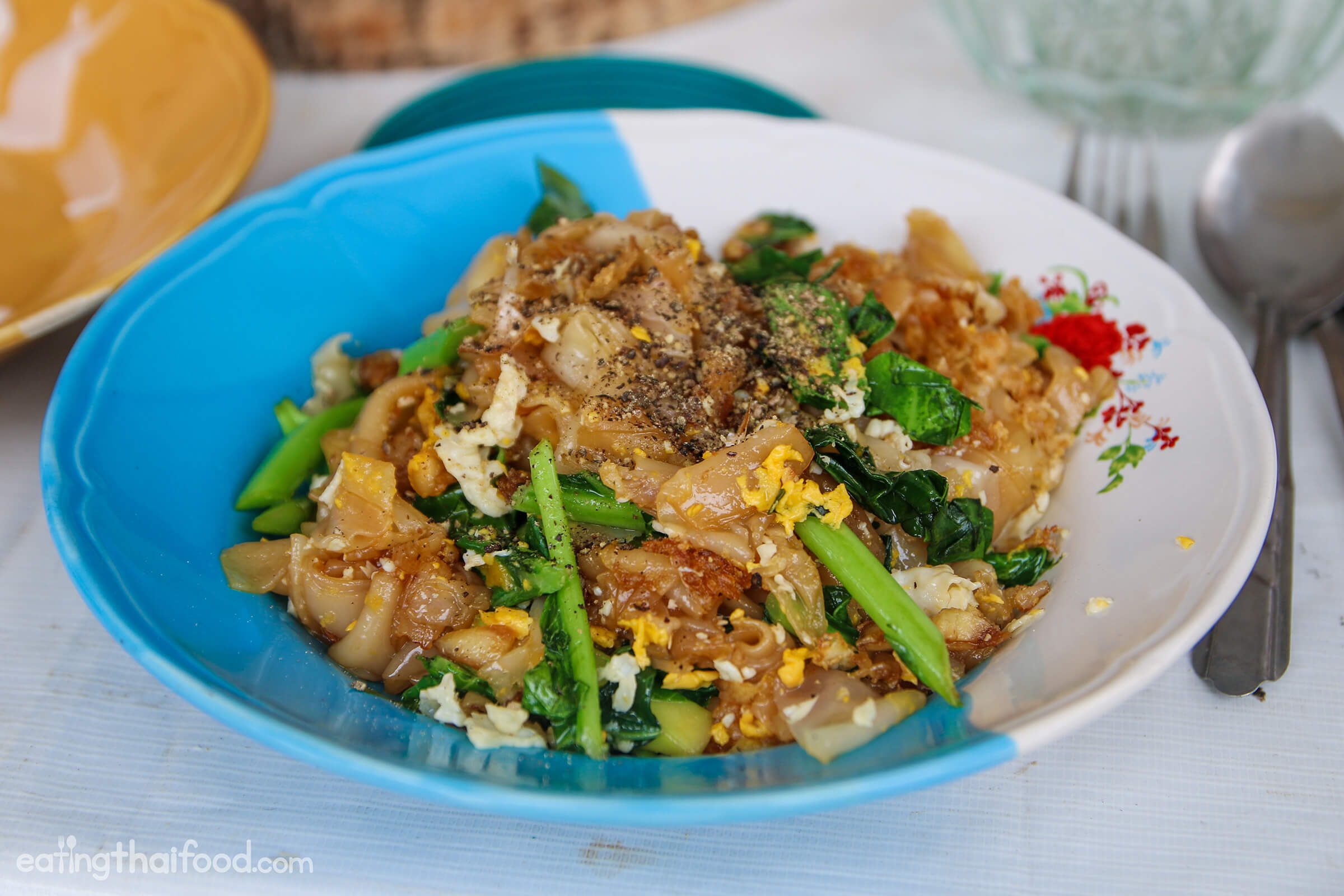 In this pad see ew recipe, you’re going to learn how to make an authentic version of pad see ew (ผัดซีอิ๊ว). 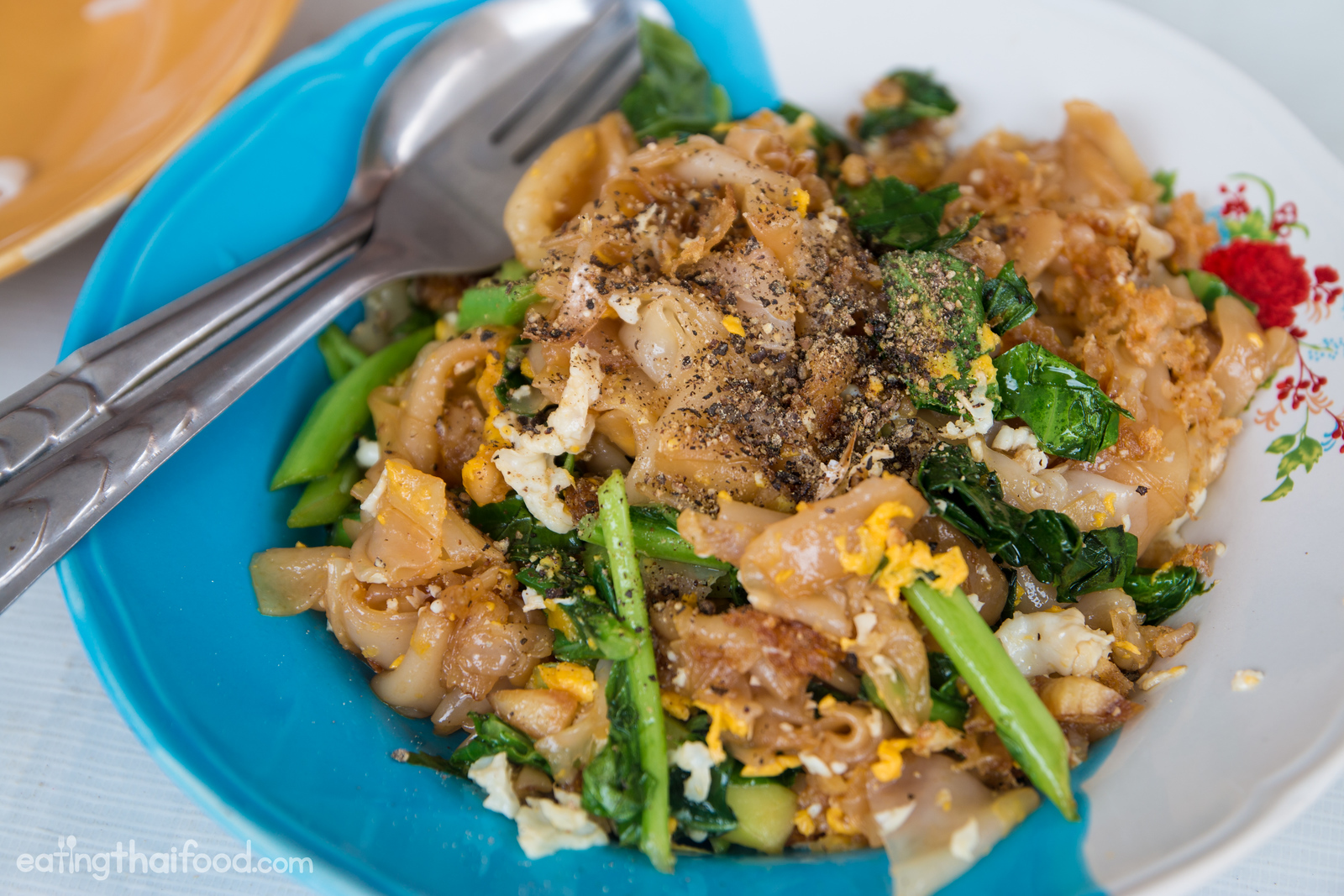 Note: If you want to get straight to the steps and directions, scroll down to the recipe box below. Or keep reading for more of an in-depth explanation of the ingredients used for this pad see ew recipe. 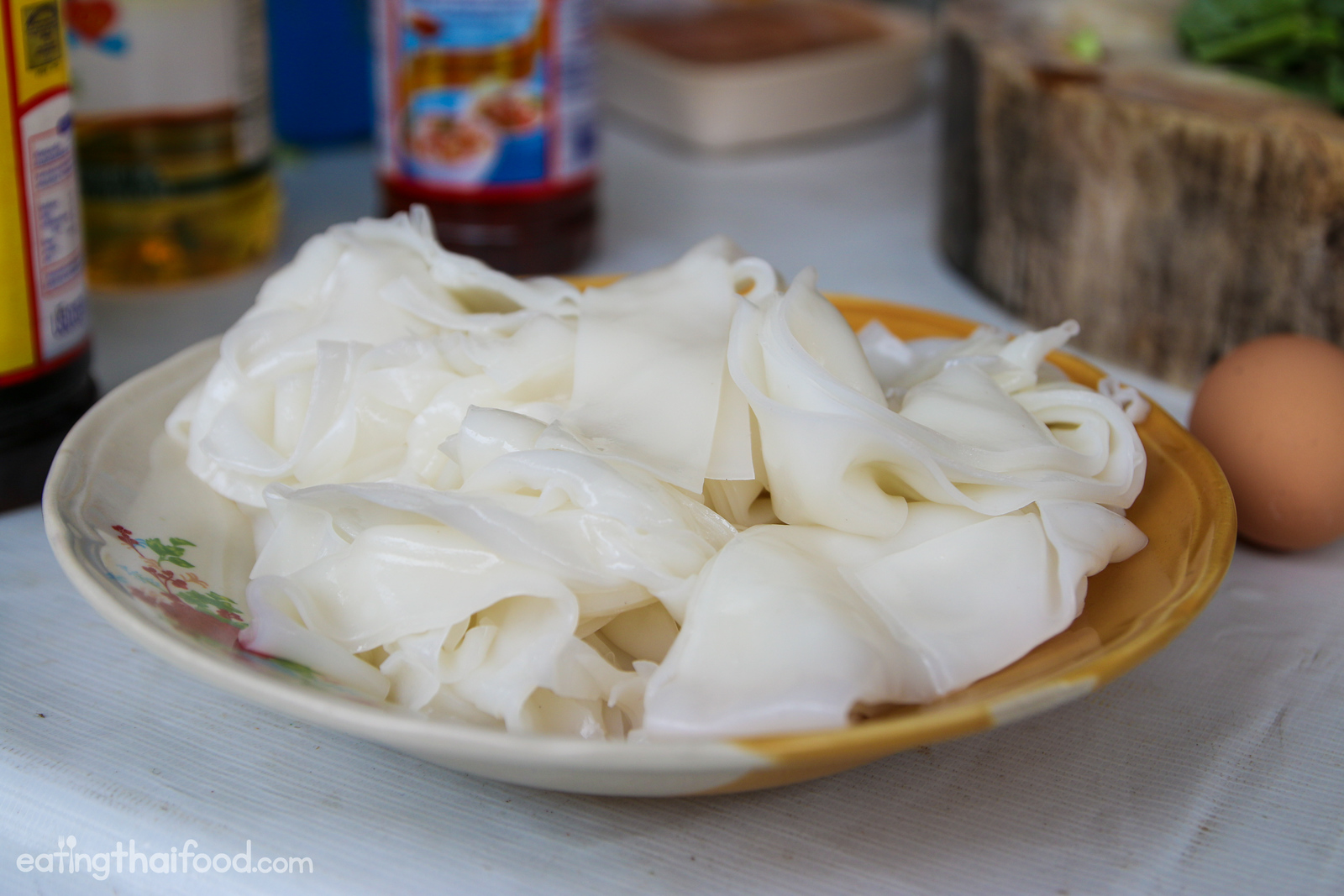 In Thailand you can purchase sen yai for this recipe at any local market, and they are available fresh and sold by weight.

In other parts of the world, you can probably find fresh wide rice noodles at most Asian supermarkets in major cities. The Thai sen yai noodles might not specifically be available, but you can substitute the Chinese or Vietnamese versions of thin wide rice noodles.

Dry noodles could work making this pad see ew recipe, but really try to find fresh noodles, as your pad see ew will taste much better.

Vegetables used for this recipe

Another key ingredient in any pad see ew recipe is a green leafy vegetable, called pak kana in Thai, which is almost the same as Chinese kailan or Chinese broccoli.

Additionally, pad see ew is usually made with chicken or pork, but you can really choose whatever meat you’d like to go with this recipe.

There are a couple of main seasonings you’ll need for this pad see ew recipe.

You’ll need both light soy sauce and dark soy sauce. The light soy sauce gives a saltiness to the noodles, while the dark sweet soy sauce will give your pad see ew a darker color and a little bit of sweetness.

For this recipe, I usually use Golden Mountain soy sauce, and for the dark sweet sauce I use a Thai brand called Yan Wal Yun. However, I haven’t seen that brand outside of Thailand, but you can substitute for an Indonesian sweet soy sauce. 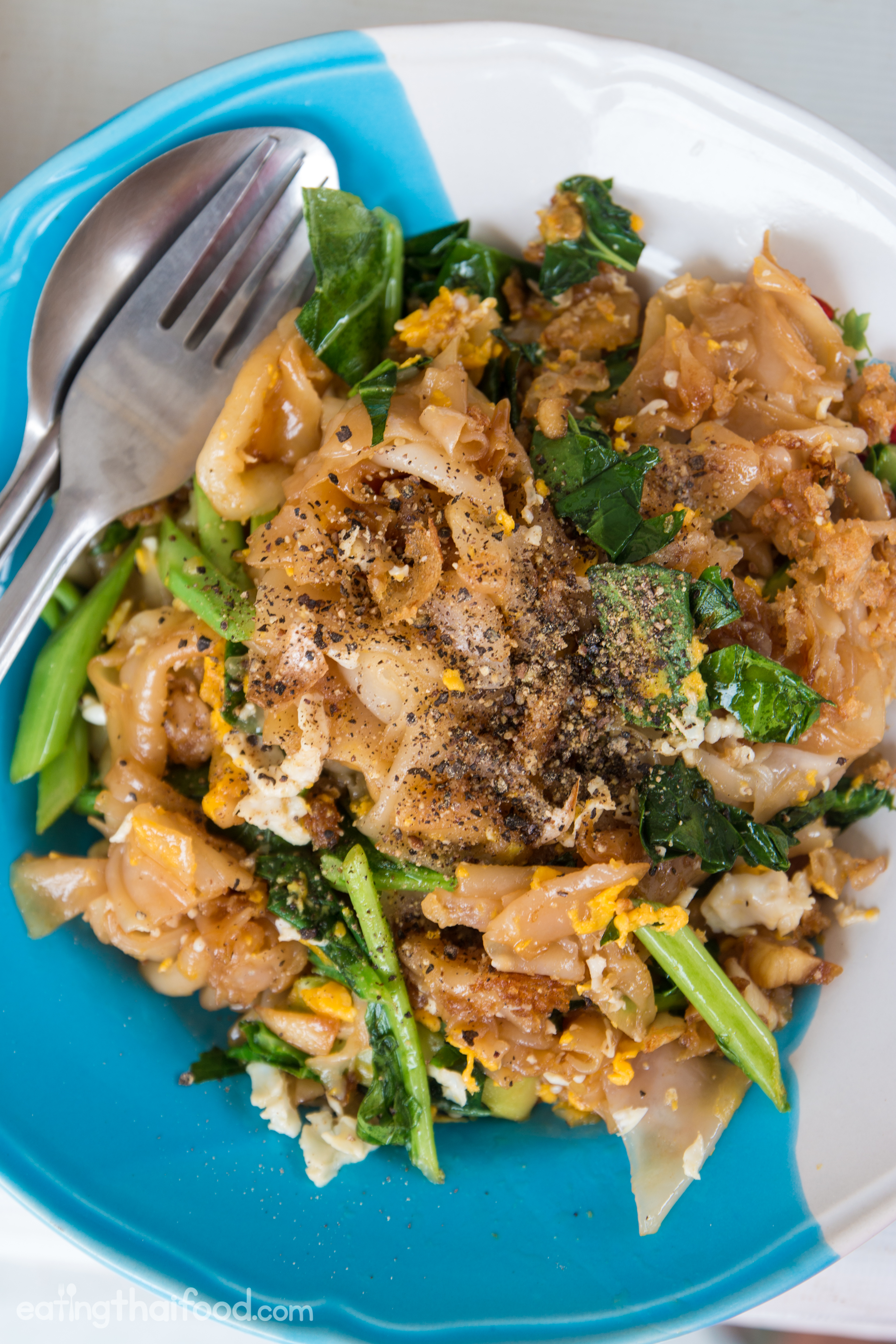 Controlling the hear is important when cooking pad see ew

Overall, this is a pretty easy pad see ew recipe (ผัดซีอิ๊ว), but the hardest part of making it is working with the heat of the wok – too low and you won’t get a good smokey taste, and too high and you’ll burn the noodles (I’ve done it many times!).

I explain more about the method of cooking pad see ew in the video instructions below and through, but I normally begin on a medium heat, and then when I add the noodles I change to a low fire for a little bit, and finally at the end of cooking, just before adding the egg, I crank up the fire to a high heat to get some wok hei (at least try to).

As with so many Thai stir fry recipes, being in control of the ingredients with varying levels of heat is so important.

Note: It’s also worth noting that it’s very difficult to use an electric stove to make good pad see ew. If you don’t have gas, another option is an outdoor grill, or you can use this chimney starter hack.

(If you can’t see the video, watch it on YouTube here: http://youtu.be/fNzPwUreLCc)

Time: About 30 minutes or less
Recipe size: This recipe is for 1 good sized plate of pad see ew
Utensils: Wok, spatula
Flavors: Salty, smokey
Eat it with:  Pad see ew is a one plate meal, fried noodles that includes meat, egg, and a green vegetables. It especially makes for a great lunchtime dish. 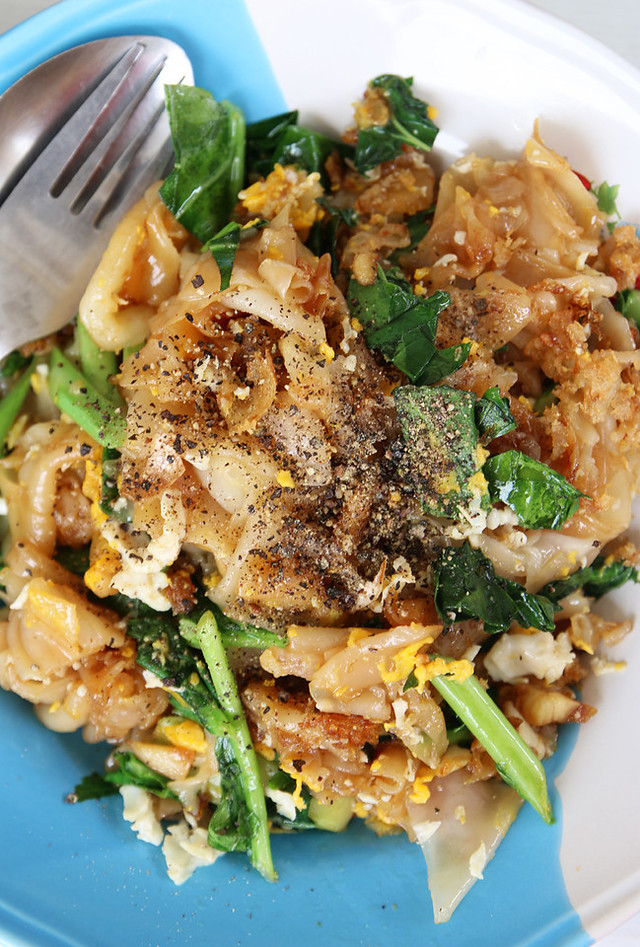 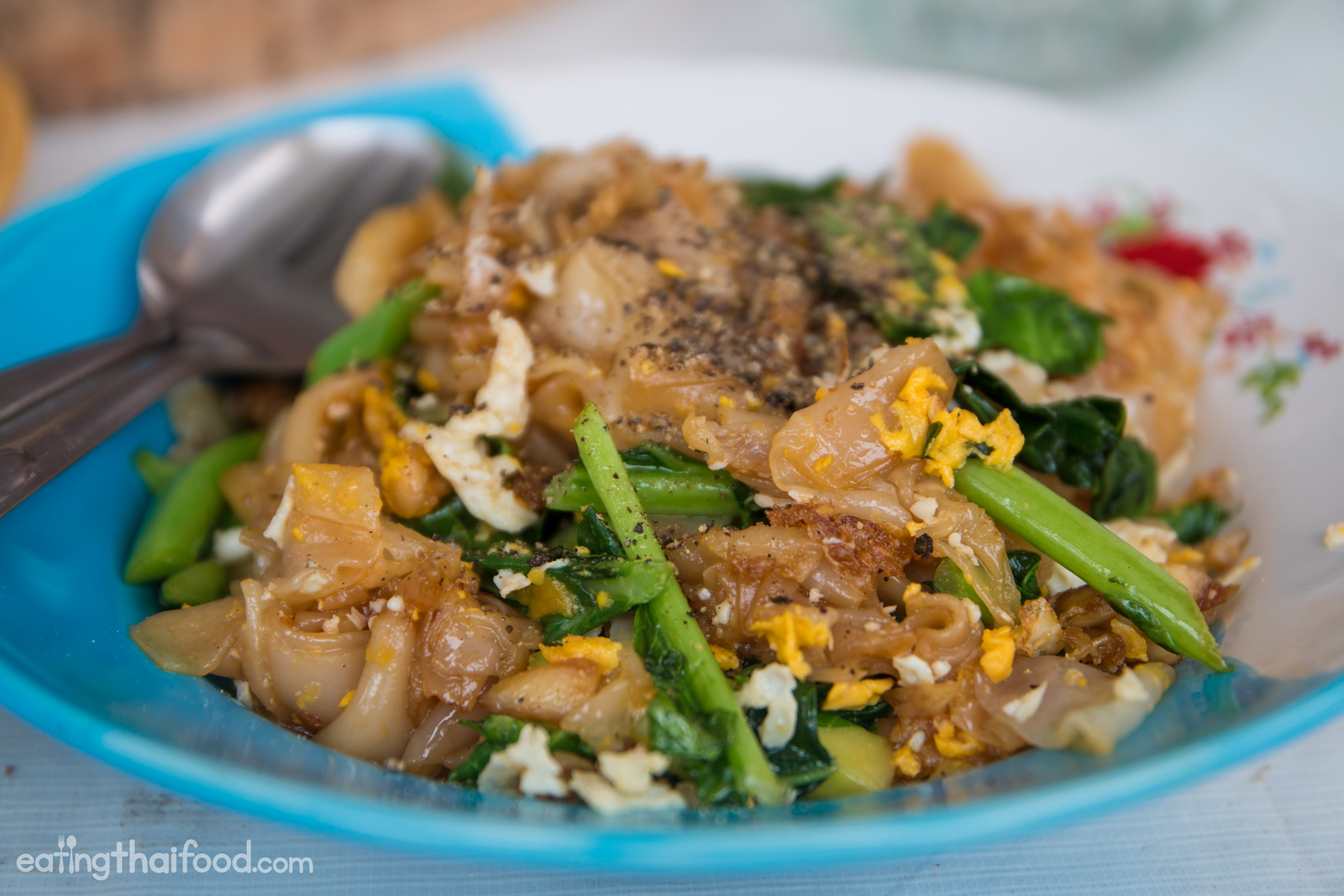 This pad see ew recipe (ผัดซีอิ๊ว) doesn’t take a lot of ingredients, nor is it too challenging to make.

The hardest part is controlling the sticky noodles, and stir frying them from the bottom of the pan gently so they don’t clump together.

Let me know what you think of pad see ew (ผัดซีอิ๊ว) in the comments below.