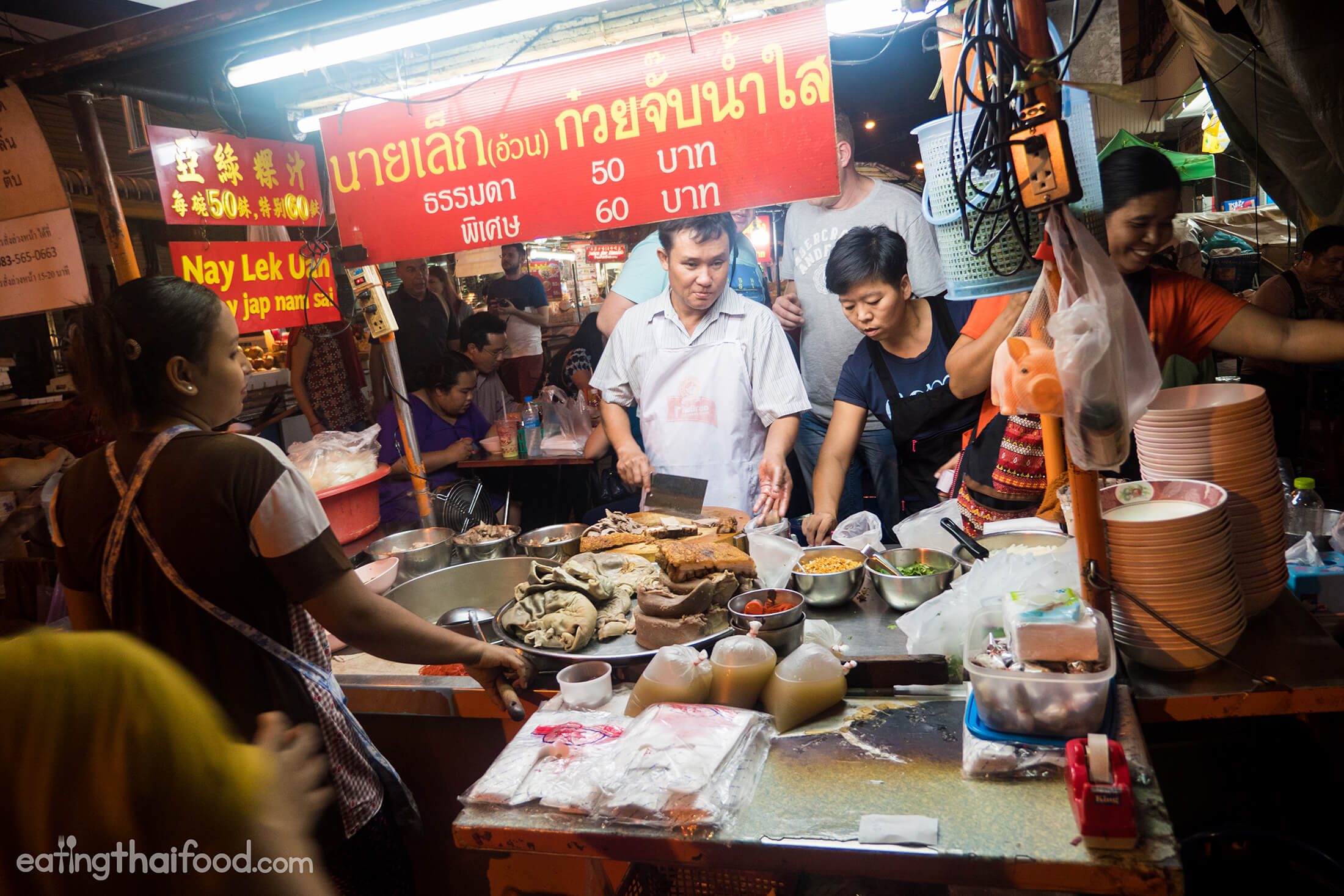 But when you’re slurping the hot peppery soup, sweat dripping down your forehead, bumping shoulders with other happy eaters, you’re reminded just how incredibly delicious and soothing it is.

Probably influenced from southern China, kuay jab (ก๋วยจั๊บ) is a Thai dish that includes rolled up wide rice noodles in a very porky and peppery broth, and it’s one of the top Thai street food dishes to try.

And when you’re in Bangkok’s Chinatown, Kuay Jab Nay Lek (ร้านก๋วยจั๊บนายเล็ก (อ้วน) is one of the great street food stalls that serves kuay jab(ก๋วยจั๊บ).

There are big fans of each type of kuay jab, but the popular version to eat in Yaowarat is kuay jab nam sai (ก๋วยจั๊บน้ำใส), and it’s the type I prefer.

Located along Yaowarat road, and within the lanes of Yaowarat, you’ll find some of the most famous and most delicious bowls of kuay jab (ก๋วยจั๊บ) in all of Bangkok.

Another street food stall, Kuay Jab Uan Pochana (ก๋วยจั๊บ อ้วนโภชนา), located outside the old theater along Yaowarat is also extremely popular, and they serve an incredibly good bowl as well.

However, lately I’ve really enjoyed the kuay jab from Kuay Jab Nay Lek (ร้านก๋วยจั๊บนายเล็ก (อ้วน), a street food stall that sets up on the corner of Yaowarat Road and Itsara Nuphap (Soi 11).

As soon as they open, they will be busy.

You don’t have a choice for what type of kuay jab to eat here, they only serve nam sai (น้ำใส).

But you do have a choice of what meats to include – if you want everything included, or if you don’t want the organs, and only pork belly.

If you enjoy organs, I would highly recommend the full option with all the organs. They are cooked so well and they are so soft and tender, you’ll hardly even notice they are organs. 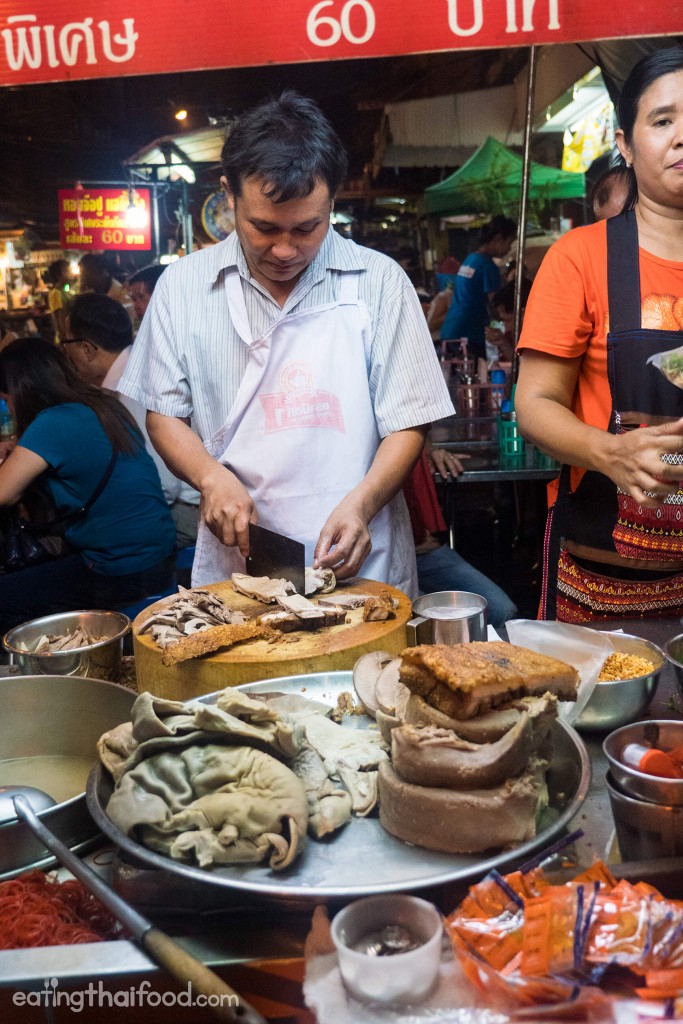 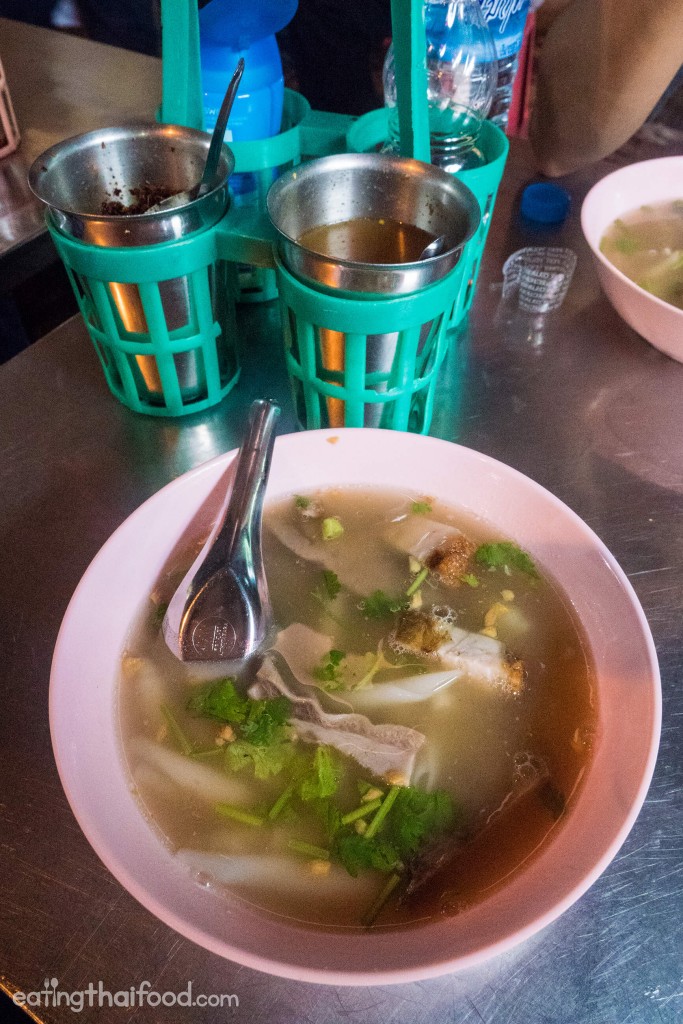 For myself, the absolute best thing about eating at Nay Lek (ร้านก๋วยจั๊บนายเล็ก (อ้วน) is the peppery broth.

The pepper taste in the soup is strong, but it’s calming and soothing at the same time, and not to mention incredibly addictive as well.

I love to eat chili with just about everything, but with a bowl here, I barely even added any extra chili flakes, because the taste of the broth was so superb as it comes. 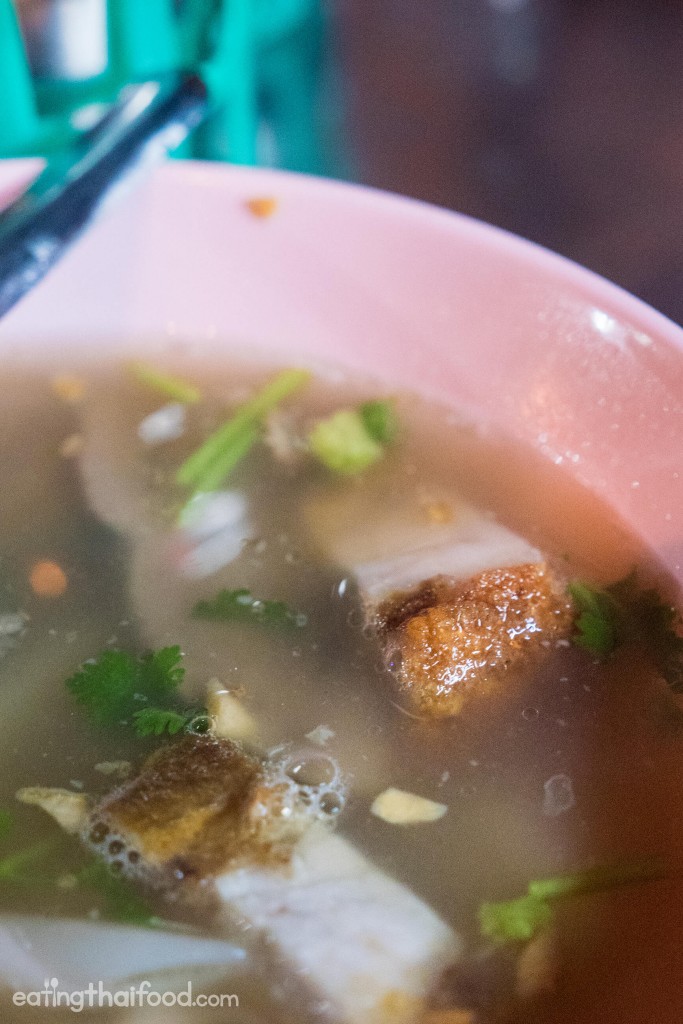 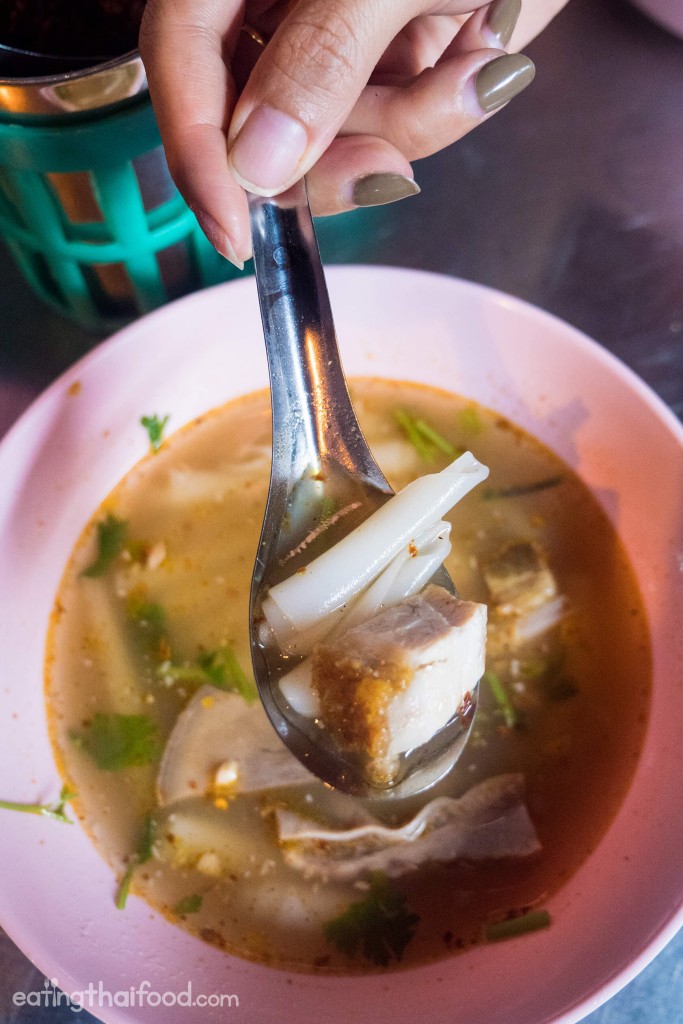 In addition to the broth, one of the things that Kuay Jab Nay Lek (ร้านก๋วยจั๊บนายเล็ก (อ้วน) does so well, are all the bits of the pig.

The pork belly was mind-blowing delicious. The edges of the pork belly were fully crispy while the inside was creamy and juicy, and each piece melted in my mouth along with the peppery broth.

The organs were also wonderful, each with their own unique texture, yet none of them were chewy or tough, but cooked to tender perfection. The tongue in particular was excellent.

Finally, the noodle rolls, which float around somewhere within the soup, were soft and plain, pairing well with the taste of the soup. Although the noodles were good, they are sort of overshadowed by the other delicious floating pieces of meat in the bowl.

One of the best bowls of kuay jab in Bangkok

What I love so much about the version at Kuay Jab Nay Lek (ร้านก๋วยจั๊บนายเล็ก (อ้วน) is that the broth is intensely peppery and so flavorful that it doesn’t need any extra seasoning.

Kuay jab (ก๋วยจั๊บ) to me is not very filling, but more soothing and just tastes amazing, so if you’re in Yaowarat, you could easily eat a full seafood meal, and then have a bowl of kuay jab afterwards.

Address: Yaowarat Road, Soi 11 – right on the right hand corner of Yaowarat Road and Soi 11 at night only
Open hours: 6 pm – Midnight daily
Prices: Bowl of noodle with everything is 50 THB ($1.39)

How to get there: The street food stalls opens up at around 6 pm everyday right on the corner of Yaowarat Road and Itsara Nuphap (Soi 11), right along the busy and hectic Yaowarat road. To get to Yaowarat, you can walk from Hua Lamphong MRT station (15 minutes) or you can take a taxi directly there.