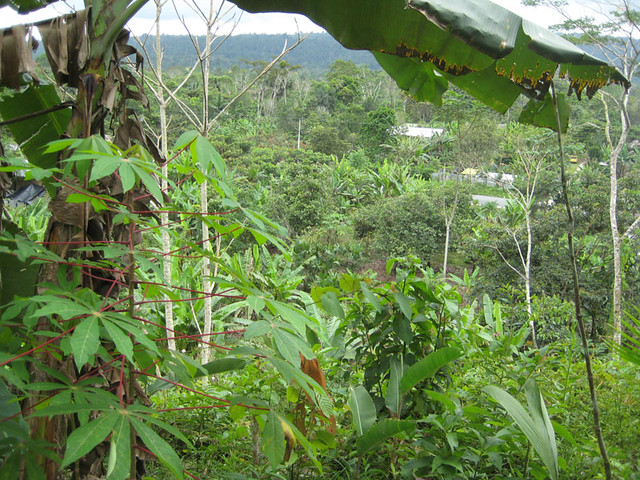 If it’s available for sale, it must not only be edible, but also appetizing to someone.

Sure, the bacteria and sanitary conditions differ from place to place, but BEYOND those concerns, the actual ingredients used in cooking should normally be humanly safe to consume regardless of location or culture.

When I lived in DR Congo the staple everyday vegetable was cassava leaves (known as pondu in Lingala), which I learned to really enjoy eating and my family ate nearly everyday.

Cassava leaves are toxic in raw form, but after a process of boiling and cooking, they become safe (and delicious) to eat – and millions of Congolese eat this vegetable daily.

Puffer fish, another big-wig when it comes to potential life-threatening delicacies, is lethal if not prepared in the correct manner. Nowadays however, the Japanese chefs that serve the fish, are trained and certified in their craft.

Wild, weird looking, mushrooms are not exactly something to experiment with either. Mango sticky rice, or the even better version with durian, is one of the most recognized and beloved Thai desserts.

But there’s another version known as Khao Neow Kloi (ข้าวเหนียวกลอย) that’s sweet and tempting, but poison to the stomach.

I had heard about this eerie Thai dessert a number of times, but had never sampled it. One Thai market vendor had warned me that she had fallen ill, vomiting and nauseas after eating some.

“But why would they sell it, if it’s such a hazard?” I had wondered.

Then finally the day came when I had a cute little plastic container full of khao neow kloi sitting right before me in my apartment purchased from a street vendor.

I took a bunch of photos, but started to get nervous about tasting it. Insects are bugs, and other weird things are fine, but something called an intoxicating yam?!

“Why would I want to take a bite of something known to make people throw-up,” I was battling in my mind – and yet I was still wildly curious as to the attraction.

I got my spoon and took a tiny bite, just enough to taste it, but far from a full mouthful.

The same sweet sticky rice as other Thai desserts, the accent of tropical coconut in both fresh and cream states, and the kloi which was crispy like an apple and gently sweet like a yam.

Despite the pleasant flavor, I was honestly afraid to eat more.

Apart from a moment of placebo fostered dizziness (I think?), I didn’t throw up or suffer any side effects – but then again, I only took one bite, and I’m hopefully they had cooked it with the correct procedure.

At the time of eating, I knew just about nothing (apart from a few stories) about “kloi (กลอย),” and it wasn’t until researching out of curiosity that I learned a little more.

The scientific name is “dioscorea hispida,” while it’s commonly referred to as an “intoxicating yam.”

There’s very little information written in English about this mysterious tuber, but I did eventually find some solid information from a book called Root Crops.

The yam is indeed extremely toxic and has been known to be eaten as a famine food in the Philippines when the rice harvest fails. 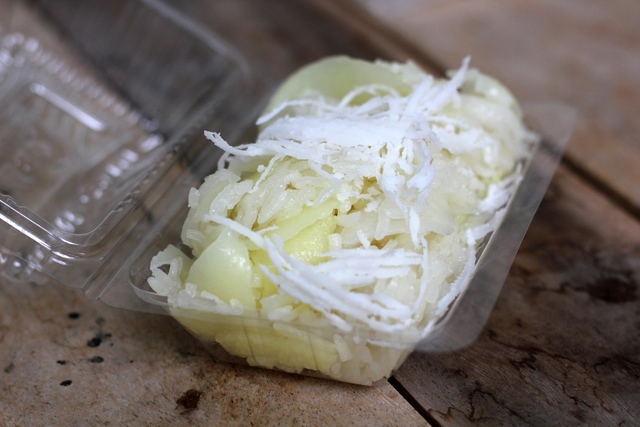 Here are a few CRAZY things:

Seriously? And it’s used in a Thai dessert too!

Glad I only took a tiny bite.

You’re wondering why this yam wasn’t discarded long ago as a non-edible, along with a host of other things that a human probably tried and died long ago, right?

I don’t have an answer – I honestly have no idea either.

Khao neow kloi (sticky rice with intoxicating yam) is FAR from the beaten menu, and it would be quite a challenge to randomly stumble into this dessert while blindly taste testing delicious things in Thailand. There’s nothing to worry about!

Don’t fear, those street food pick-and-choose excursions will probably be 100% cooked with safe to consume ingredients.

To be honest, I consider us all to be quite fortunate to be on the end of a trial-and-error food research process that has spanned thousands of years.

Just think about all the humans throughout history that have lost their lives as a result of food cultivation experimentation.

So there you have my encounter with Thailand’s infamous rare dessert that happens to be poison.

What do you think? Would you try Khao Neow Kloi (ข้าวเหนียวกลอย) – though I can’t recommend it!?