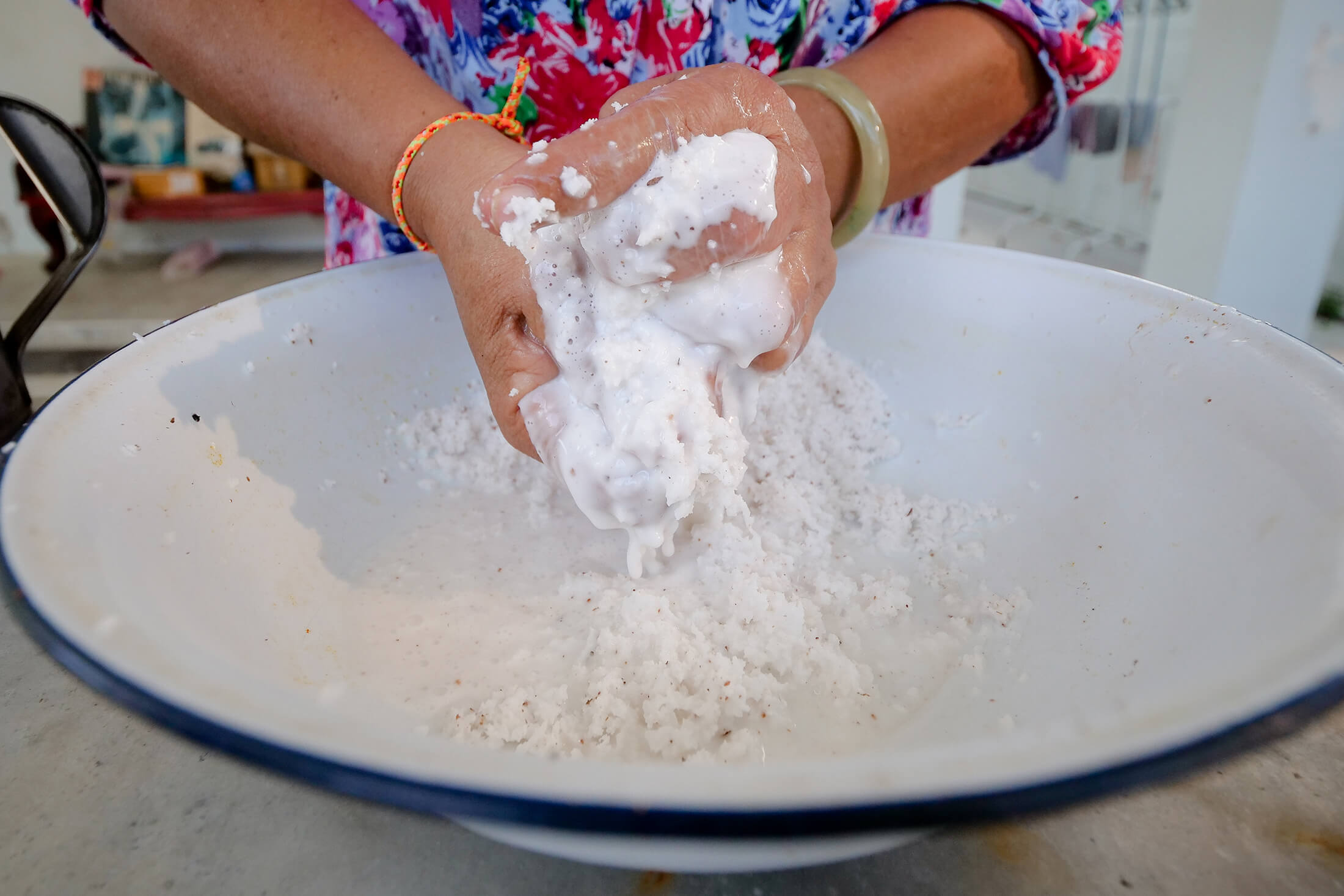 Learning how to make coconut milk, freshly squeezed, is one of the top ways to make better Thai food.

Making your own coconut milk assures that for any Thai dishes using coconut milk or cream, you will have the best taste possible.

In this authentic Thai recipe, I’m going to show you step by step how to make your own coconut milk.

Of course, it’s easy to buy coconut milk in a can or box (and if you need to I recommend Aroy-D in the box).

But I gaurantee, if you squeeze your own coconut milk fresh, whatever Thai dishes you cook will taste multiple times better.

Just to clarify before we start this recipe on how to make coconut milk: there are two types – coconut cream and coconut milk.

Coconut cream is typically the first squeeze of the mature coconut milk – it’s richer and very creamy. The coconut milk is usually the second squeeze, of can be a combination of both coconut cream with more water added.

We’ll learn to make both in this recipe.

In order to make coconut milk, you need mature, thick meat, coconuts – not the young coconuts for drinking the coconut water.

Mature coconuts have a hard brown shell on the outside, thick white flesh on the inside, and add a depth of flavor to your cooking that is not possible using milk from a can. In the US or Europe I’ve seen mature coconuts at Asian or even Latin American supermarkets.

Cracking open a coconut can take some practice, so let’s learn how to do that first. 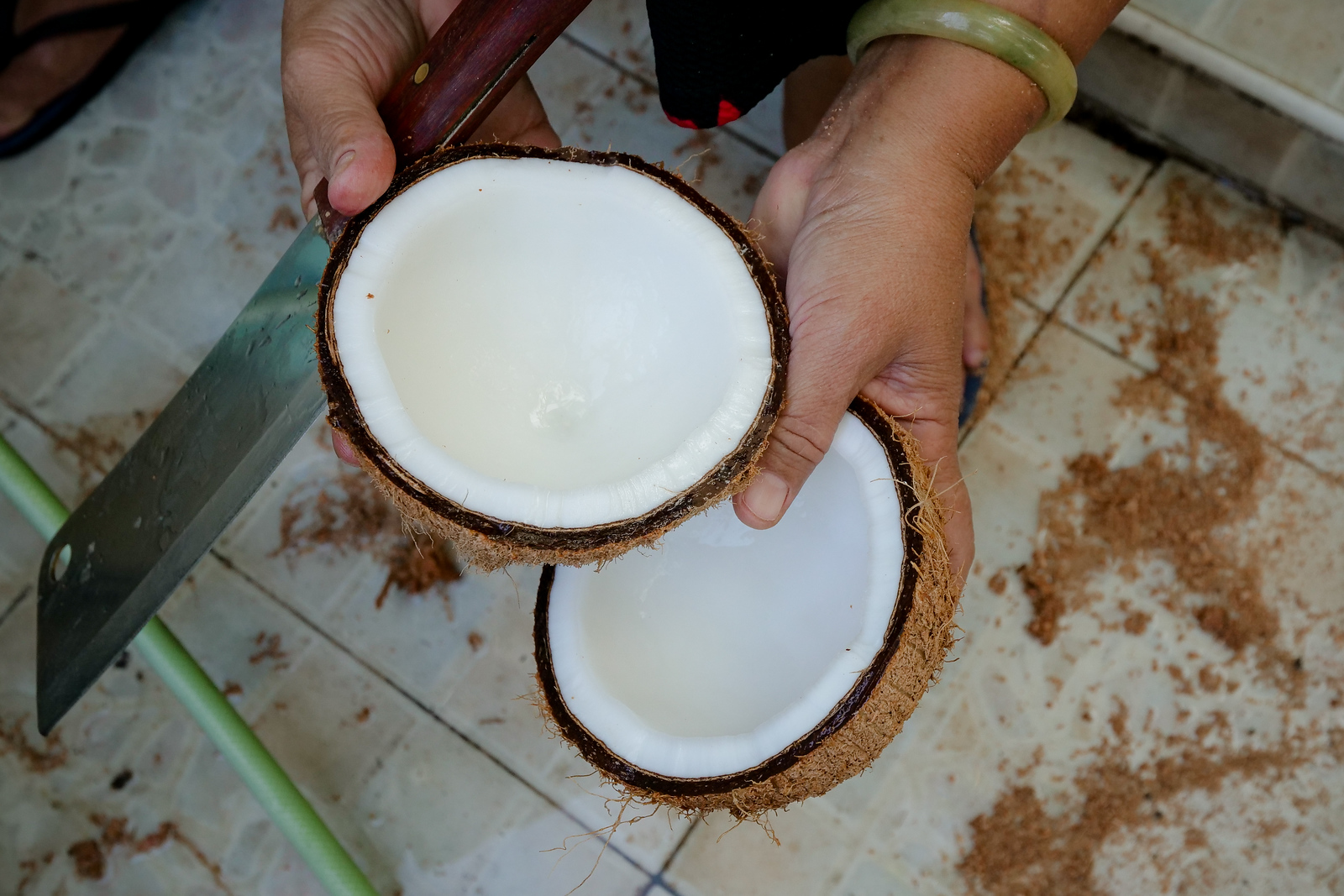 Large pieces are much easier to handle when shredding a mature coconut.

When you purchase the coconut, make sure it’s a mature (brown coconut), not a sweet water green young coconut. The important part is the meat inside and not the water, so it needs to be a mature coconut with thick white meat.

The back edge of a strong knife is really the ideal tool for this. A blunt object (such as a hammer) will not make a clean break in the coconut shell. This includes striking the coconut against a hard object. This makes it much harder to shred the meat, so really try to get an even break all the way around.

The backside of a Chinese cleaver also works well. 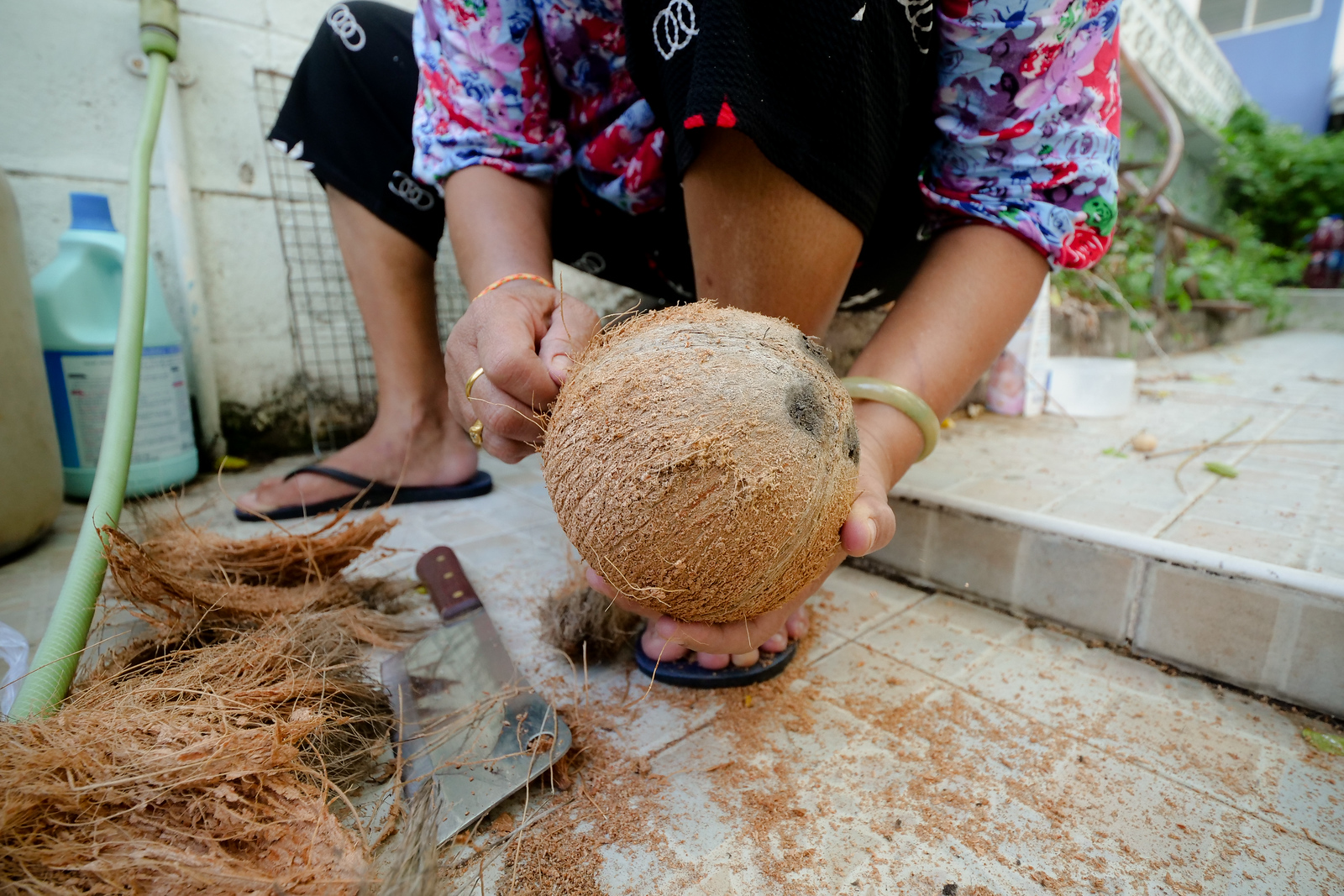 Find a place where it’s OK for things to get a little wet when you break open the coconut.

Most coconuts have a small bit of pressure inside and you’ll always have at least some water escaping when you break through the shell and puncture the inner flesh.

Don’t worry, its not going to explode… but it might spray just a little :)

Rip off all the husk/hairs on the outside of the coconut, you may need to use the sharp edge of your knife. (Try a chopping motion instead of sawing the hairs). The shell is extremely hard, be careful not to let the knife glance off at an angle when chopping away at the hairs. 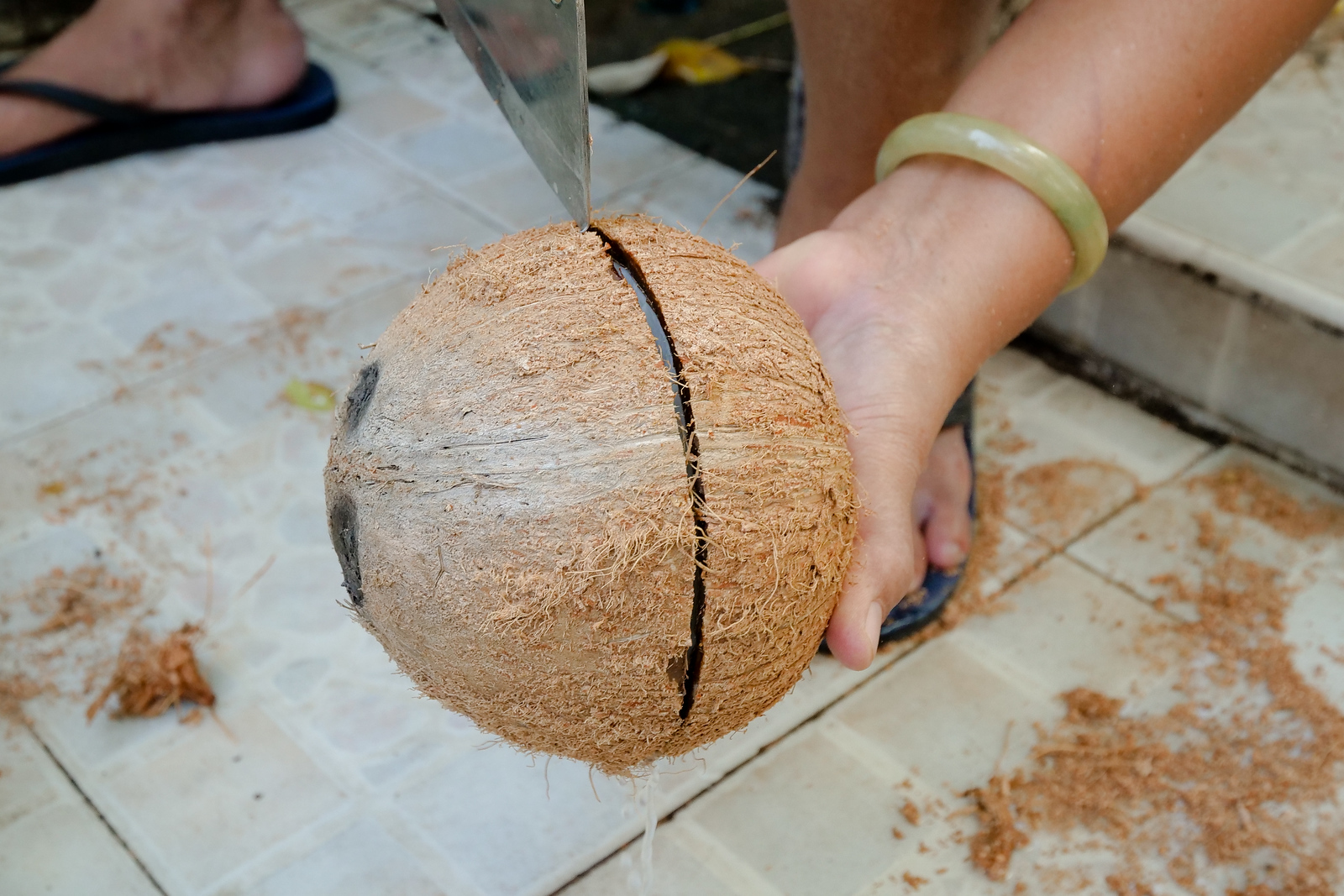 If only making coconut milk, then you don’t need any of the coconut water inside.

Using the back edge of a strong knife, the easiest way is to strike the coconut horizontally along the middle, using short and quick chops, rotating the coconut and creating a crack all the way around until it separates into two halves.

Do not follow through with your strike, just quick strikes will do.

Don’t worry about the water pouring out (by all means save it, the water is good to drink, but you don’t need it for this recipe). For coconut milk, it is only the mature meat used to make it, and not this coconut water.

Grab your scraping tool and 1 of the Large Mixing Bowls.

Position the bowl under your scraper tool to catch all the flakes of coconut meat. Scrape out all the coconut meat from the half-shell, being gentle not to dig too far down into the shell.

If you see brown flakes starting to come into the bowl, move to a different section of the coconut. The coconut flakes are bright white, light and airy, piling up into a mound in the bowl.

Hand Tools or a “Rabbit” Scraper

Thai Coconut scrapers have attached seats, this is the most safe way to remove the meat.

In Thai, they call it a “Rabbit scraping coconuts,” maybe because of the motion like a rabbit’s back legs. Cute name, but shredding coconut meat directly out of the hard shell can be done many ways. A hand-tool also works fine. 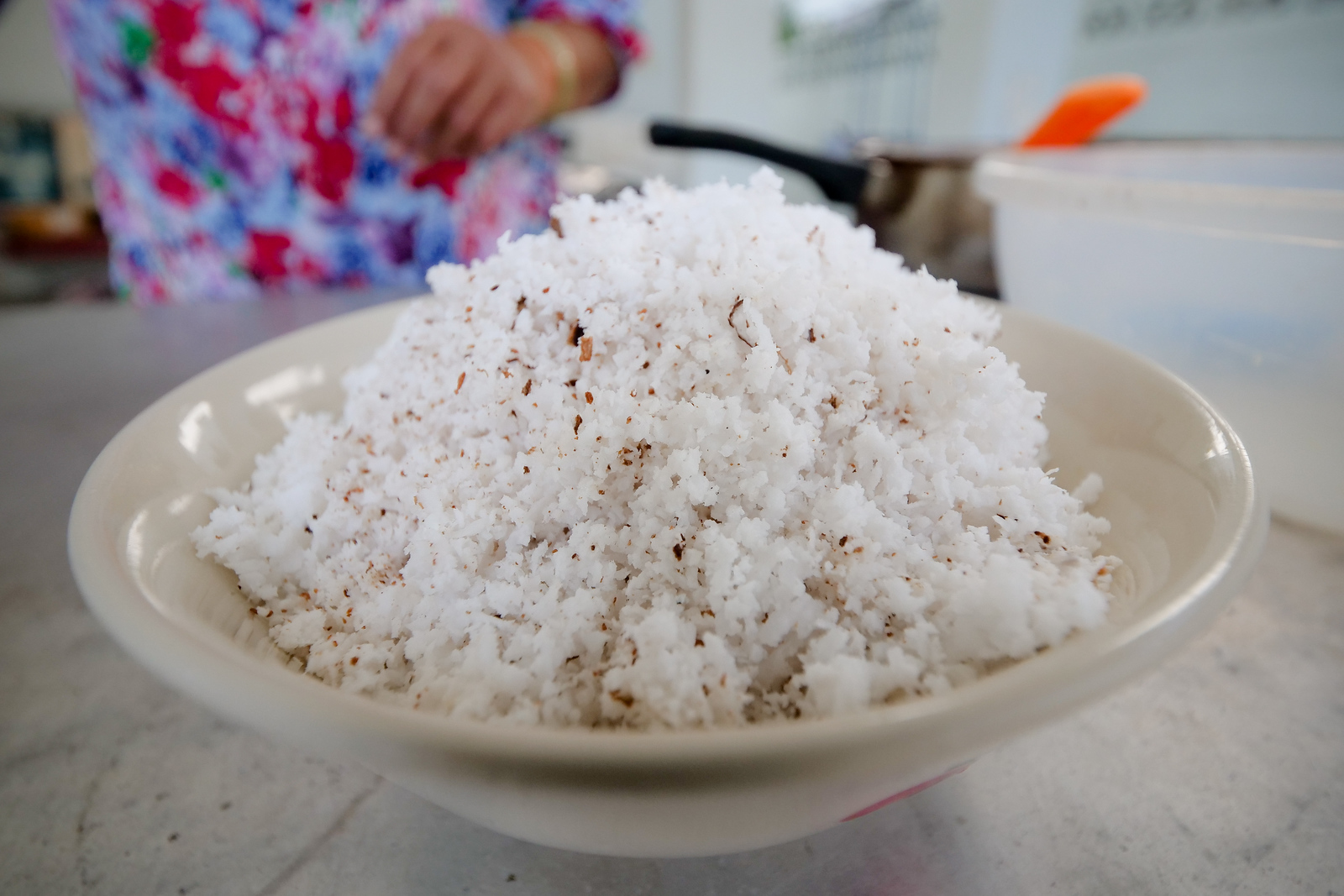 This is an art, using the coconut shell to protect your hands, but also not pushing too hard when digging into the meat. This works best if you can perfectly break the coconut into two equal halves, and therefore be able to use both of your hands on the coconut shell. Doing this well takes a lot of practice.

One medium mature coconut should yield about 300 g of coconut shavings.

Note: I do not recommend using a knife. I have personal experience with the dangers this can bring, and even if you are successful, chopping the meat finely enough to squeeze (step 2) is extremely time consuming.

A blender will also not work for coconut cream (but will work for milk, albeit you may have to strain out the meat fibers after blending).

Prepare 300 ML of room temperature water, and pour it over the coconut shavings (into the same large mixing bowl). Massage the coconut flesh with your hands, mixing it together thoroughly with the water while squeezing the coconut meat.

The water that has now turned white and collects in the bottom of the bowl is the coconut cream you want.

Squeeze the shredded coconut through a screen on cloth into a 2nd bowl. This is your coconut cream, it should be rich and thick. 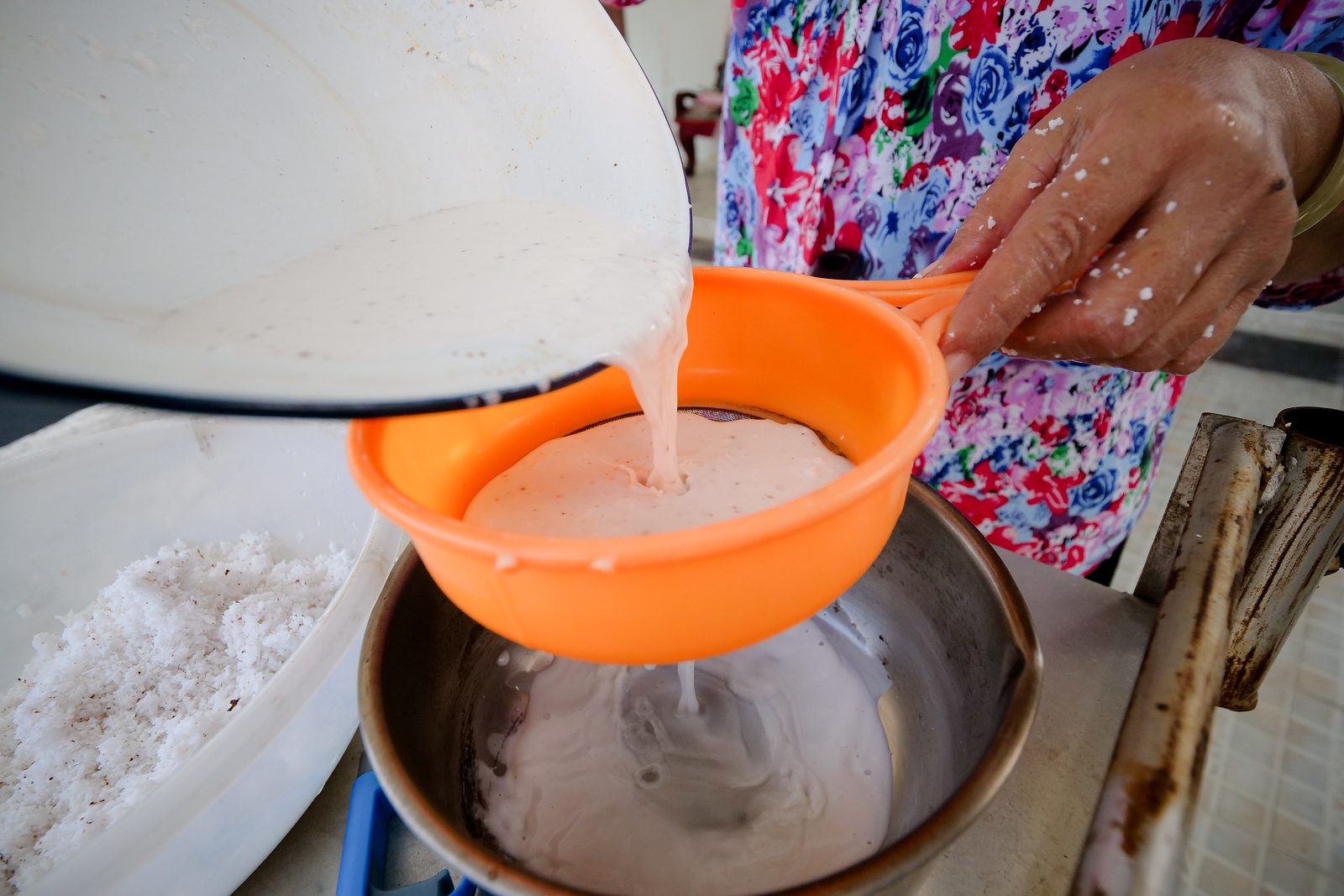 So after setting aside the coconut cream, add another 300 ML of room temperature water to the coconut shreds, and mix and massage them for a few minutes with your hands.

Again, pour the coconut milk through a strainer into another pan, and squeeze the shredded coconut to get it all out. 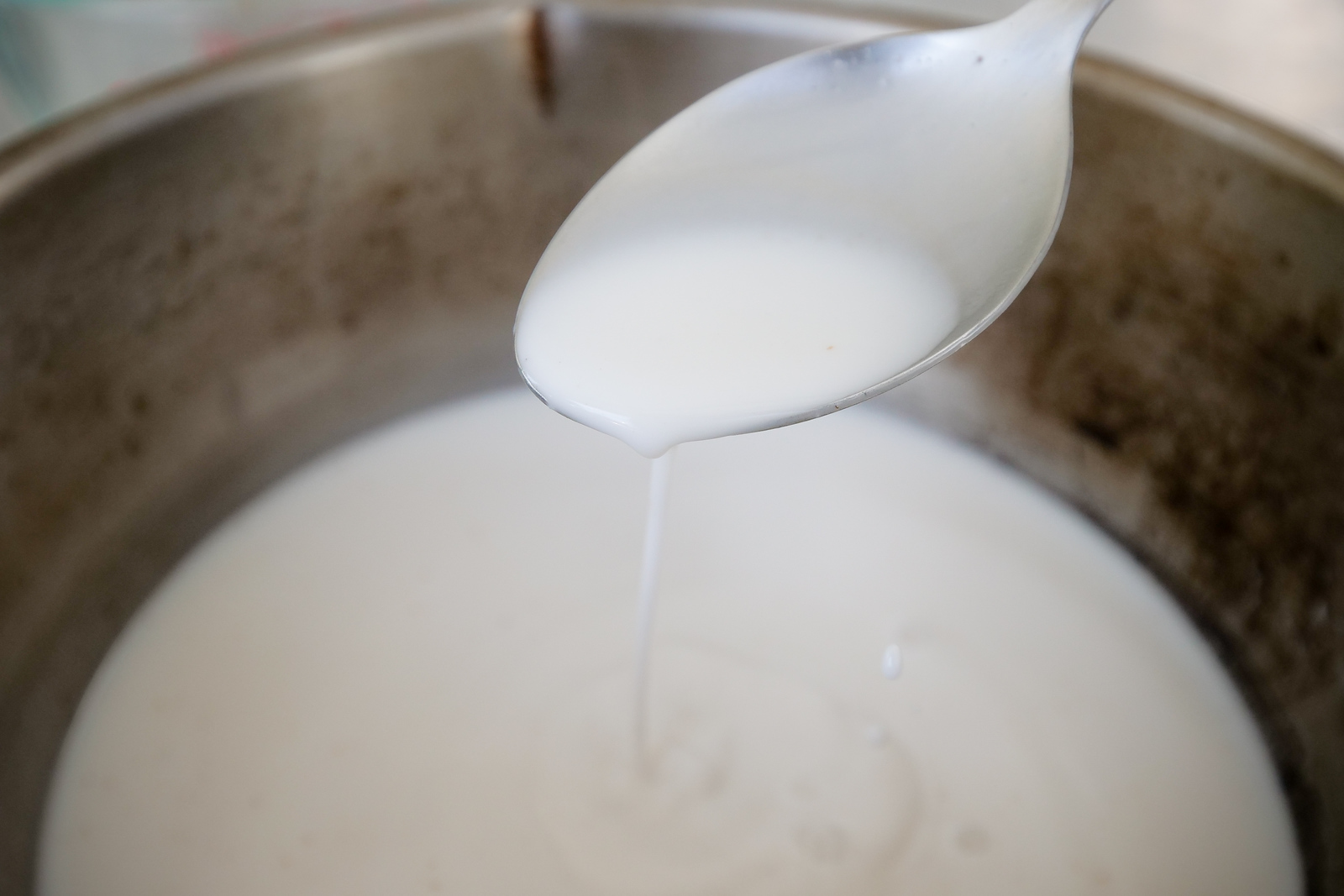 You’ll now have a bowl of coconut cream and coconut milk. For Thai recipes it’s best to keep them separate, but for some dishes, or if you just want coconut milk, you can mix them together.

From one single mature coconut you should get about 500 – 600 ML of coconut milk and coconut cream.

You could use boxed or canned coconut milk and sometimes if you’re in a push for time you have to (if so, try the Aroy-D in the box, not can, I’ve found it’s the best). However if you have time to make your own coconut milk, it makes a huge difference and improvement for all your Thai cooking.

Happy eating, and hope you enjoyed this Thai recipe for how to make fresh coconut milk!