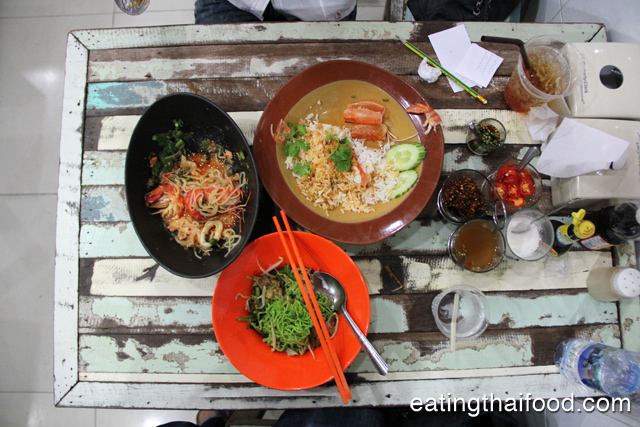 Petchaburi Soi 5 is one of the best Bangkok street food streets.

Each day and even more so in the evening, you’ll find a bedazzling amount of restaurants and Thai street food carts serving delicious and ready to be devoured cuisine.

And among the mess of culinary delights, there’s one famous establishment known as P’Aor (ร้านพี่อ้อ), that serves what I think could be the best tom yum goong noodles (ก๋วยเตี๋ยวต้มยำกุ้งน้ำข้น) in all of Bangkok. 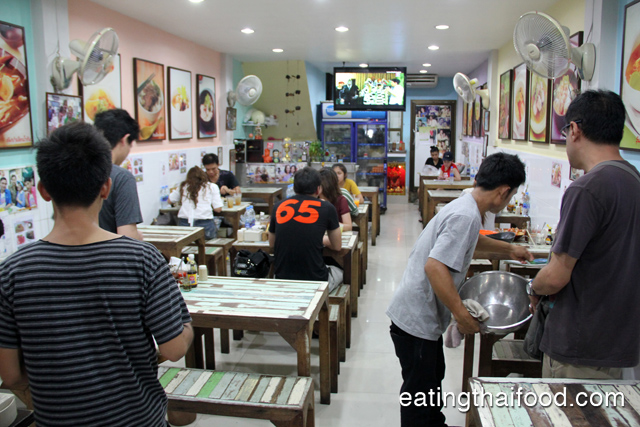 P’Aor (ร้านพี่อ้อ) has become a little fashion trendy restaurant, they would be what I call just one step above a normal shophouse restaurant.

Their awards and trophies are decorated throughout the dining room, and rather than the customary stainless steel tables, they interior designed themselves with antique looking wooden tables and benches. 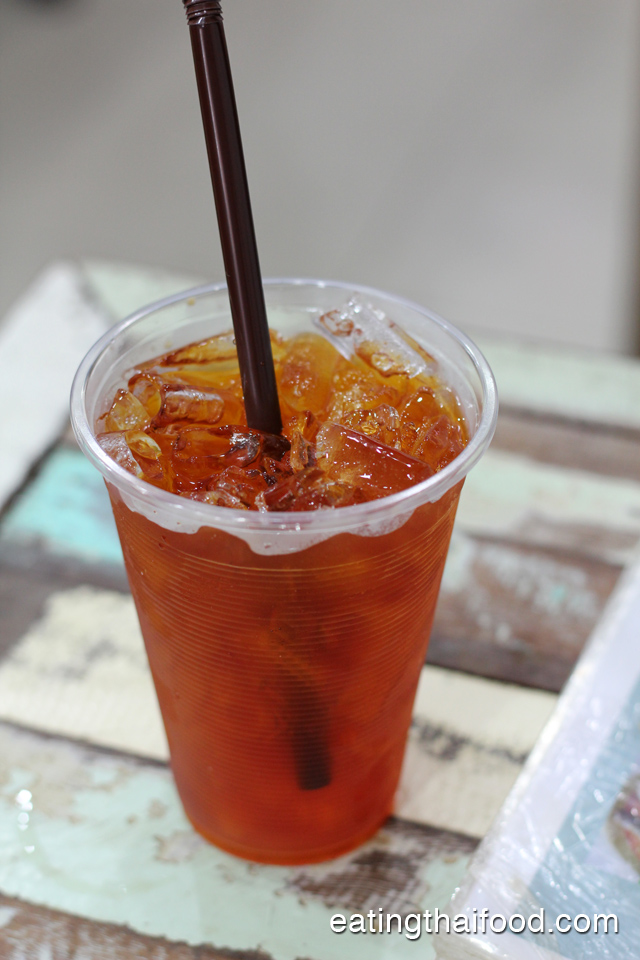 Starting off with a cha manao

Before our dishes arrived, we started off with a refreshing cha manao (ice lime tea). 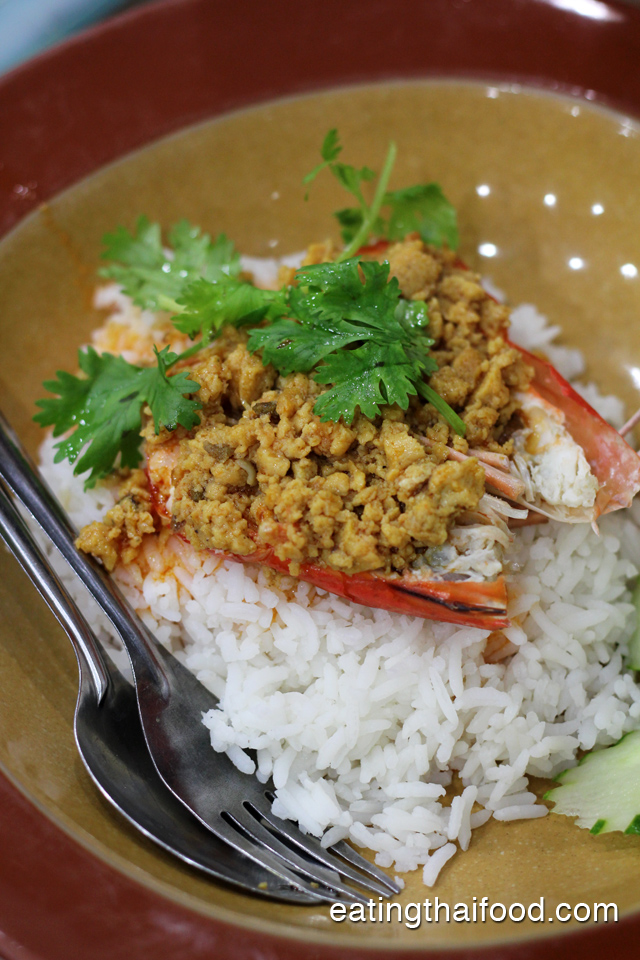 And then the food arrived, one by one, the first being Khao Goong Rad Sauce Man Boo (ข้าวกุ้งราดซอสมันปู).

Now let me explain to you what this is…

It starts with a plate of rice. A shrimp, and I’m talking a jumbo prawn, is sliced in half and laid upon the bed of rice. From there, a heaping pile of “man boo,” known in English as the buttery oil and goop from the head of the crab is piled on top.

A few light seasonings and a sprig of cilantro, and the creative dish is complete. 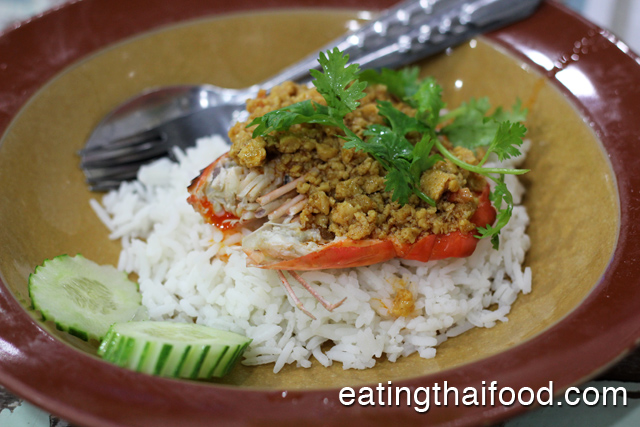 A thing of beauty

It was reminiscent of boo pad pongali, but different. The shrimp was firm and flavorful and the crab fat was creamy like a cross between scrambled eggs and straight margarine.

It definitely was oily, but sure was tasty. 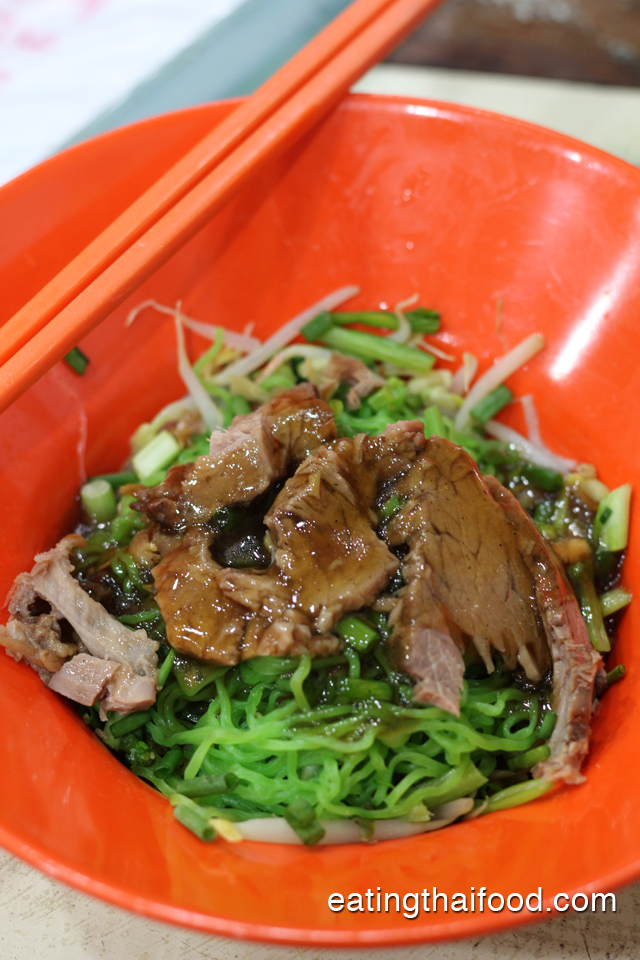 The egg noodles are supposedly flavored with green kale, but I think they use some food coloring too. 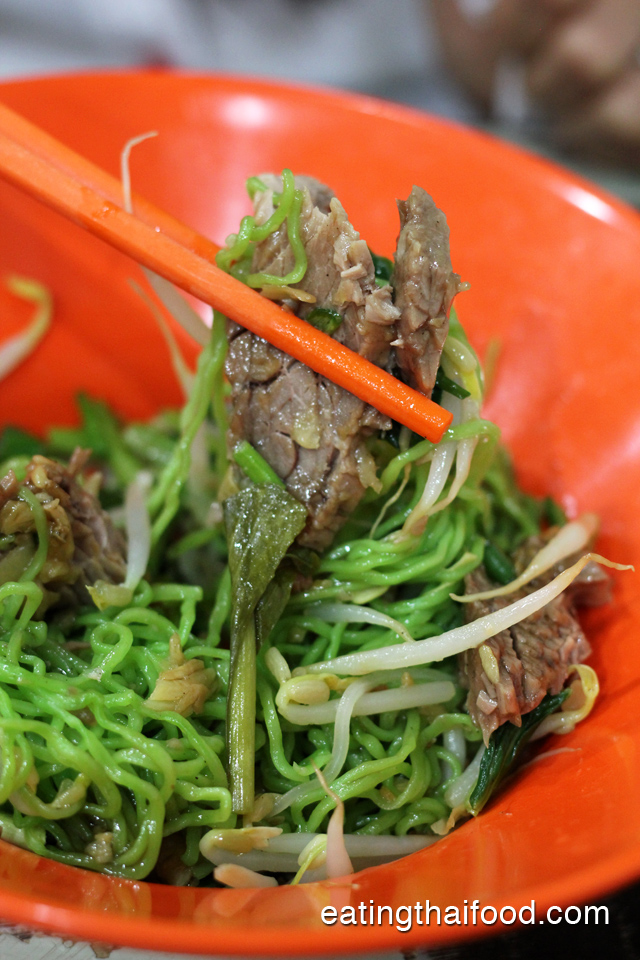 The Ba Mee Yok Neau Ob (บะหมี่หยกเนื้ออบ) included bean sprouts, greens, a nice pile of noodles, and tender slices of slow braised beef similar to what would be included in Thai beef noodles.

The entire bowl was then drizzled in a salty oyster sauce that bursted with an unforgettable flavor of beef and crispy garlic and shallots. 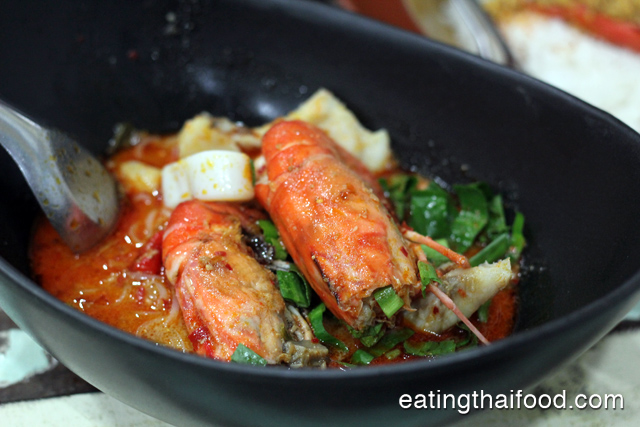 No, our meal at P’Aor (ร้านพี่อ้อ) was not over yet, in fact, after consuming both other rich Thai dishes mentioned above, it was then time to move in to the main event: Kuay Teow Tom Yum Goong Nam Khon (ก๋วยเตี๋ยวต้มยำกุ้งน้ำข้น).

Now in Bangkok, it’s rare to find the creamy version of tom yum goong soup served with noodles, so P’Aor (ร้านพี่อ้อ) is a specialty spot for it. 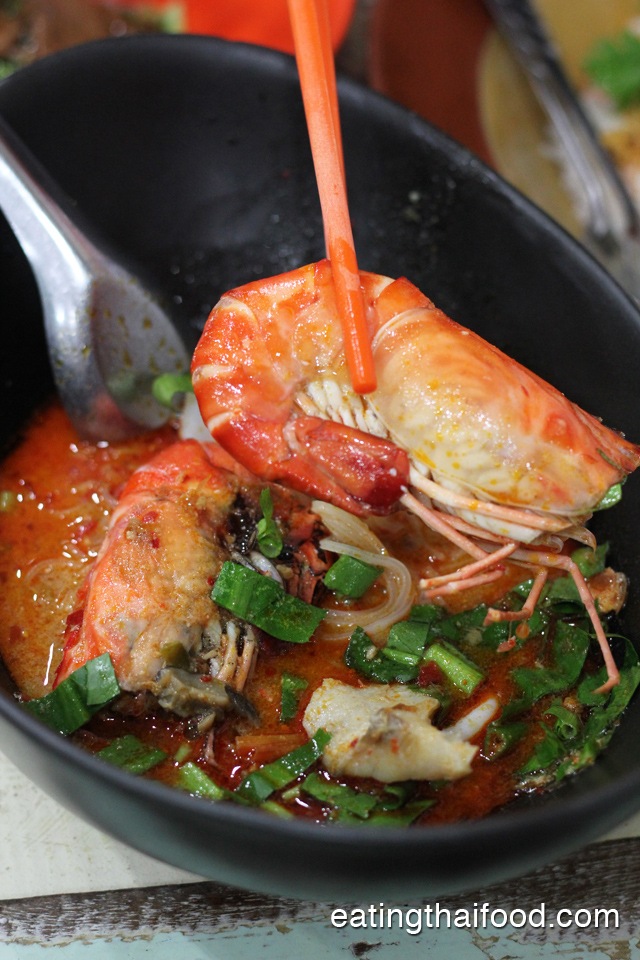 And look at the size of the luscious jumbo shrimp that come loaded into the soup!

At most street food stalls, tom yum nam khon is made creamy by condensed milk, but at P’Aor (ร้านพี่อ้อ), while they do use some condensed milk I’m sure, they also add a ton of the oily fat and custardy goop from the giant shrimp heads – that’s right!

At Pad Thai Thip Samai you can get pad Thai fried in shrimp head oil, but tom yum goong, in my opinion, is just so much better! 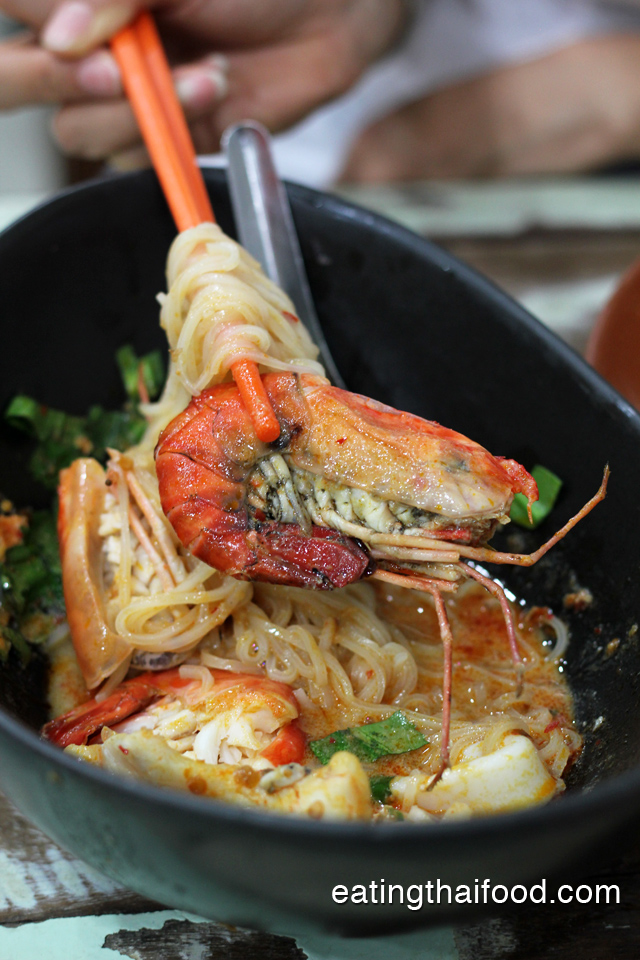 The Kuay Teow Tom Yum Goong Nam Khon (ก๋วยเตี๋ยวต้มยำกุ้งน้ำข้น) was nearly unbelievable, almost too good to be true – had I not tasted with my very own tongue.

Along with being outrageously rich and creamy, it was also packed with sawtooth herb and the lemongrass and kaffir lime leaves came through with gusto. 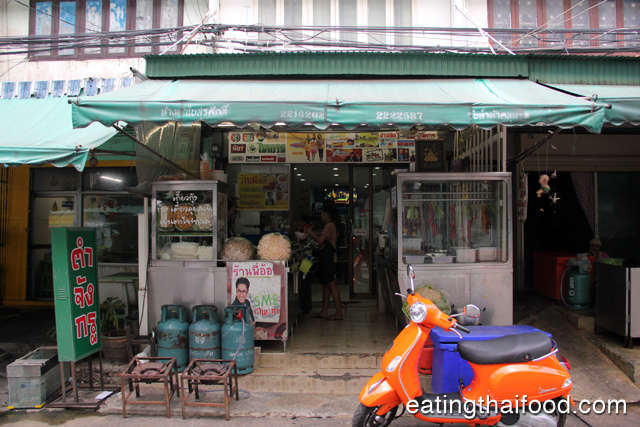 There are no but’s about it, P’Aor (ร้านพี่อ้อ) is the place in Bangkok for a bowl of Kuay Teow Tom Yum Goong Nam Khon (ก๋วยเตี๋ยวต้มยำกุ้งน้ำข้น) that may change your life (for the better), forever.

Prices: We paid 220 THB for the entire meal

You can take the BTS to Ratchathewi station. Once you get off, walk over to Petchaburi Soi 5 and make a right turn onto the soi. Walk down the street about 300 meters and you’ll probably see a durian or mango vendor – that’s where you turn right onto a small quieter street. Walk down about 50 meters or so, and P’Aor (ร้านพี่อ้อ) is on your left hand side.