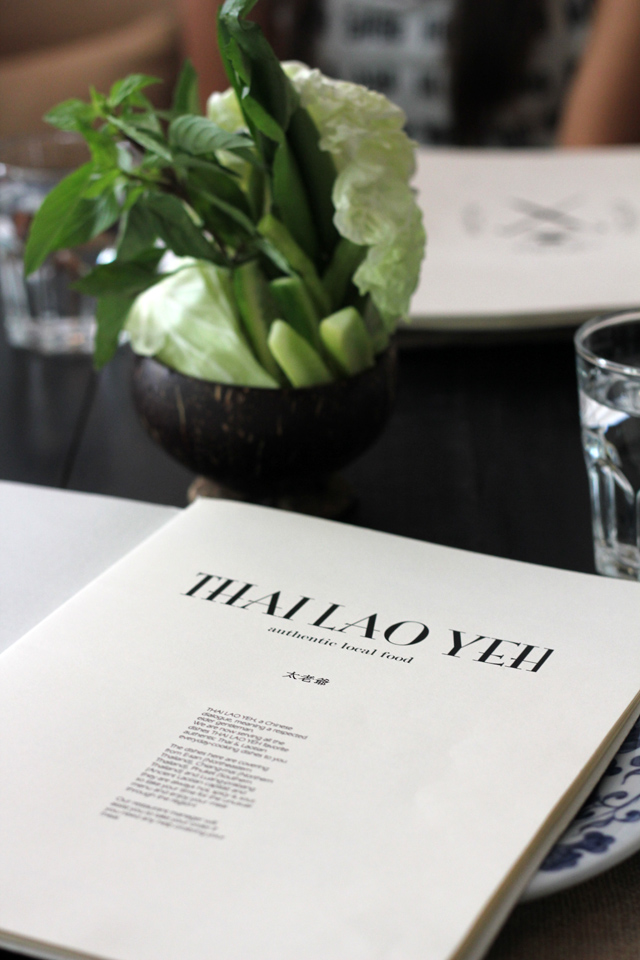 Even though it’s just steps away from noisy Sukhumvit Road, stepping into Cabochan Hotel was like entering a colonial country club on a golf course.

The luxurious residence aims to depict the golden years of Bangkok’s “Shanghai chic” era, with French and Austrian architectural influence.

On the bottom floor of the hotel is Thai Lao Yeh, a cozy restaurant that specializes in authentic Isaan and Loas cuisine. It’s an atmosphere that if in a movie, the men would be sitting back with glasses of whiskey while puffing on thick cigars.

But if you know me by now, I went for the food! 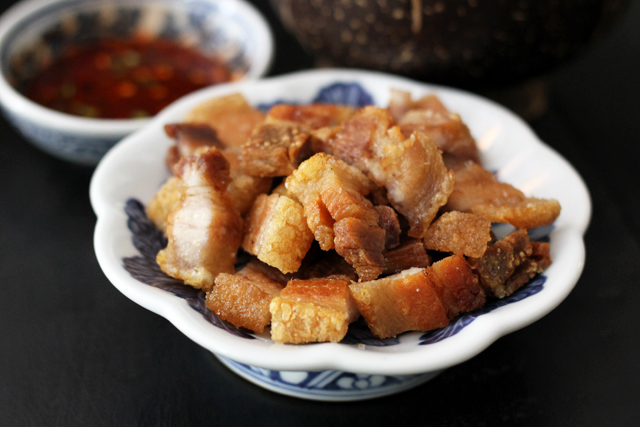 We started things off with a few small starters.

These pleasant morsels of moo krob (หมูกรอบ) were like pig candy, fried to a crisp, yet soft and easy to chew on the inside.

We also ordered a bowl of larb gai yang (not pictured). The tender chunks of grilled chicken soaked up the larb sauce remarkably well and the fresh herbs and fried chili peppers topped things off. 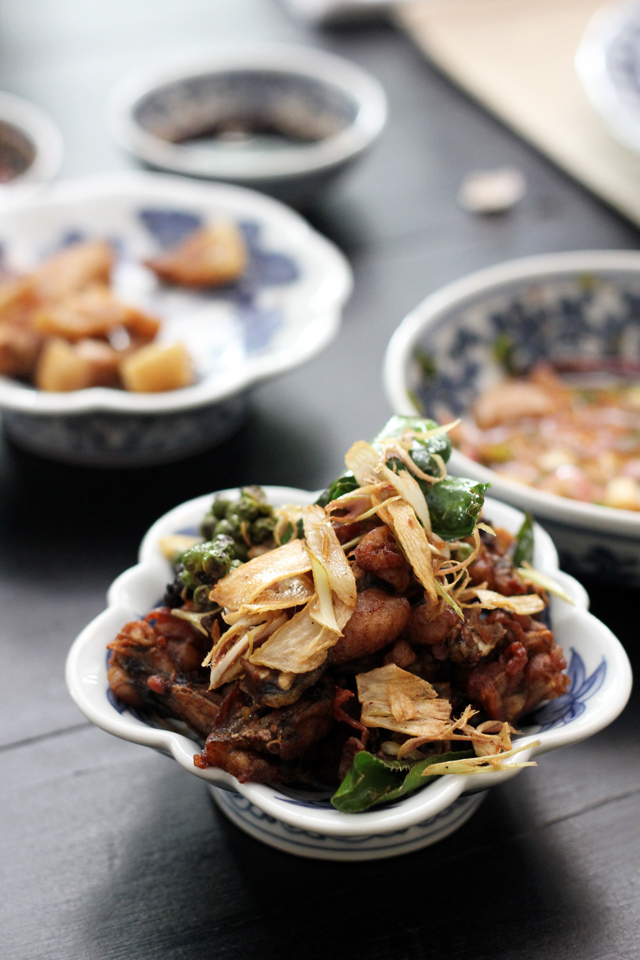 Deep fried pieces of frog, paired with slivers of garlic, kaffir lime leaves, and Thai green peppercorns was also a treat to nibble on. 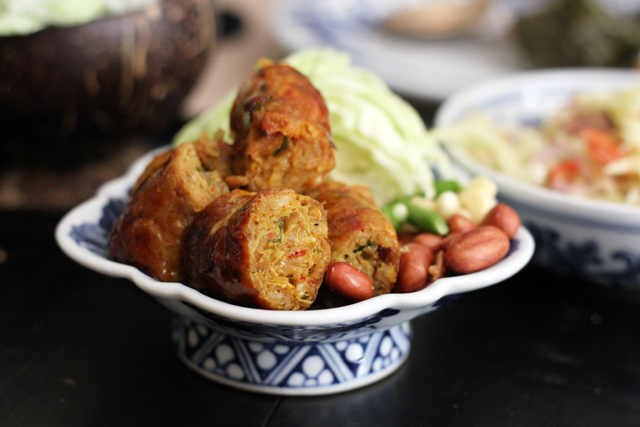 I love dissecting a sausage and being able to distinguish the ingredients, rather than peering into a sausage only to see lumps of transparent fat. That’s one reason I love northern Thai sausage (sai ooah ใส้อั่ว) so much.

The sai ooah was a really small portion, but the sausage was really nice, and neatly served with roasted peanuts, raw cloves of garlic, and chili peppers.

The version at Thai Lao Yeh was a lot tamer looking than my usual street side chicken feet soup, but the flavors in the soup were still impressive.

Though a fancy restaurant, they did not slack when it came to sour, spicy, and strong with galangal and lemongrass. Each slurp of the soup was an explosion of lemon and chili softened by those sweet chicken feet. 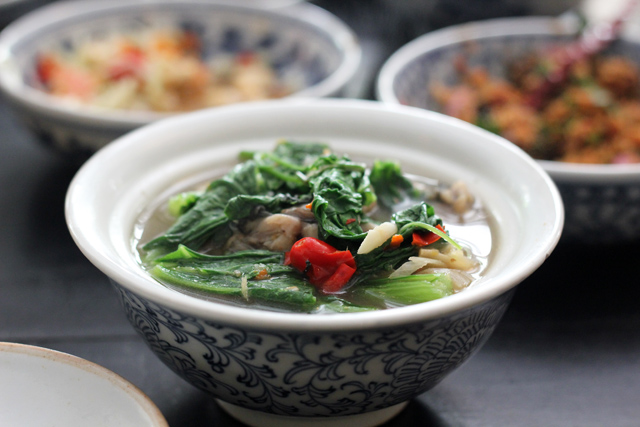 Along with the lovely chicken feet, we ordered gaeng om. Heavy on the herbs and loaded with frog, this little bowl of soup is what I consider a more gardeny, instead of the foresty tasting version of Thai jungle curry. Both excellent. 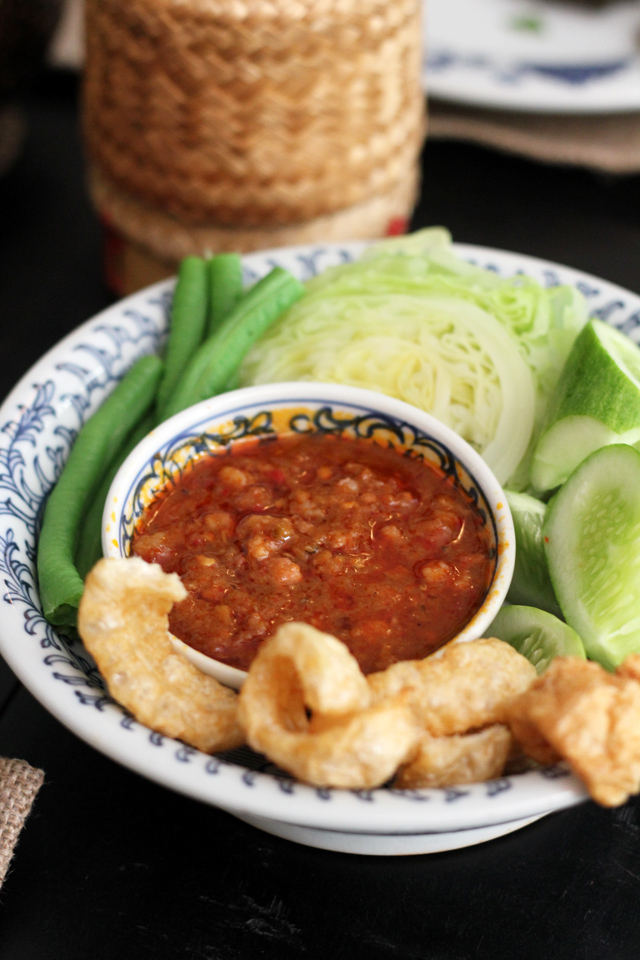 My lesser favorite dish was the steamed veggies with nam prik ong. Don’t get me wrong, it was good, but perhaps my taste buds were overjoyed by the fierce and sour other dishes so by the time my tongue came in contact with this lesser spicy platter of vegetables and dipping sauce, it just wasn’t as thrilled. 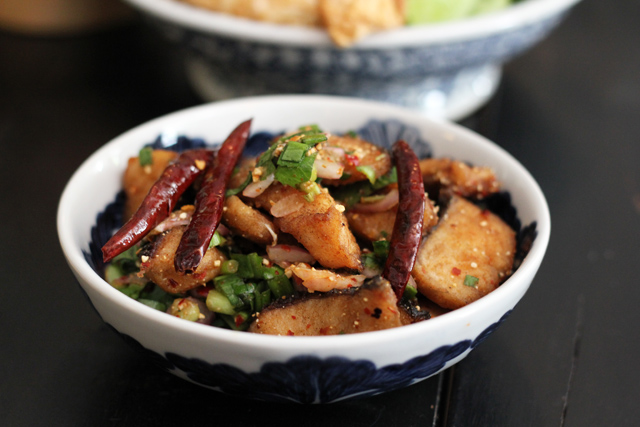 Another satisfying dish of the meal was the nam tok pla chon, deep fried bite sized pieces of snake head fish, combined with a generous amount of shallots, green onions, fried chillies, and drizzled in lime juice and fish sauce.

The crunch of the fish with the excellent dressing was fantastic. 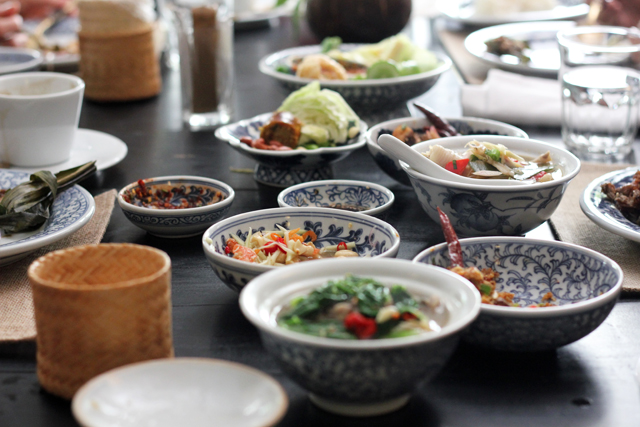 All the dishes were superb. Flavors were spicy and sour as they should be, and herbs and garnishes were fresh and aromatic. Our meal was balanced to perfection. I had by far the fanciest helping of larb pla duk (ลาบปลาดุก) I’ve ever had in my life, and it was extremely tasty.

My only complaint would be that dishes were quite dainty. Quality was excellent, portion size was tiny, prices were quite steep.

What to order: Menu is fully in English and includes descriptions of each dish

The Cabochon Hotel is literally just a stones throw from Sukhumvit Road on Soi 45. The soi dead ends right into the hotel. Closest BTS station is either Phrom Phong or Thong Lor.