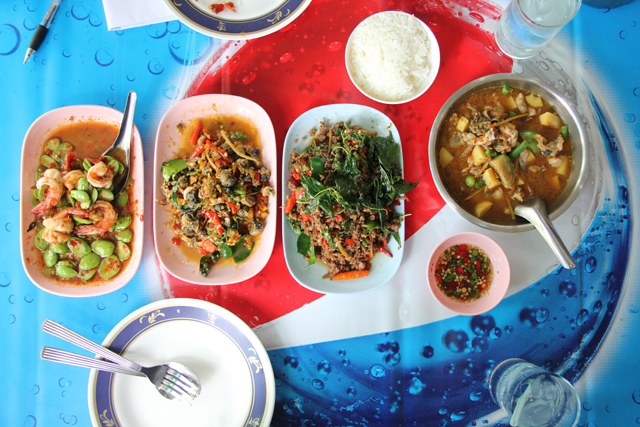 Known in Bangkok as one of the top restaurants that serves northern Thai jungle curry (gaeng pa แกงป่า), I was really looking forward to eating at Ran Gaeng Pa Sriyan (ร้านแกงป่า ศรีย่าน).

Though quite a local restaurant, there’s both a Thai and English menu. However, I did notice that the English menu only contained about half the dishes that were on the Thai menu, the frog and quail both absent on the English menu.

So that’s exactly what we ordered: the frog and the quail. 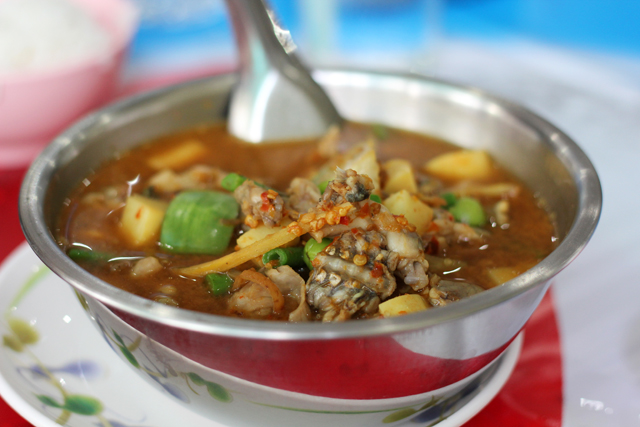 As the name of the restaurant suggests, Thai jungle curry (gaeng pa แกงป่า) is what it’s most famous for.

Northern Thai jungle curry is a mindblowingly flavorful medley of vegetables, herbs, chillies, pungent roots, and a choice of meat. Traditionally, the jungle curry was most frequently made with wild boar and a selection of natural growing vegetables from the forest.

At Ran Gaeng Pa Sriyan (ร้านแกงป่า ศรีย่าน), you can order jungle curry with a choice of different meats. For something unique, we ordered it with frog (แกงป่ากบ) 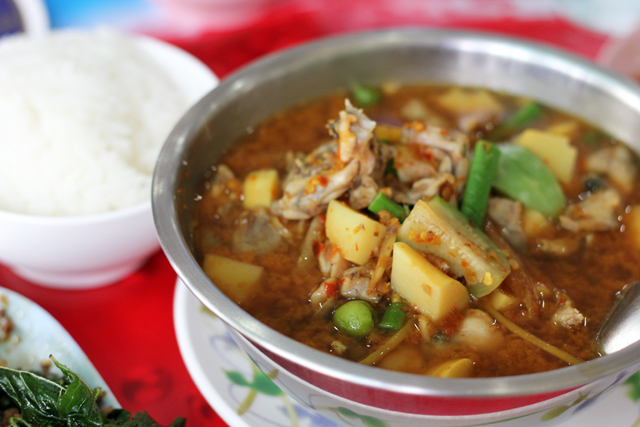 It’s by far the best Thai jungle curry I’ve had.

The mixture of young bamboo shoots, Thai eggplant, pea eggplant, fiery chillies, strips of ginger-like krachai (a rhizome similar to ginger but with no real English name), big clumps of simmered basil, and the meaty chunks of frog made it spectacular.

It literally contained the earthy yet green flavor of an entire jungle in a bowl before me.

It was spicy and amazingly good. 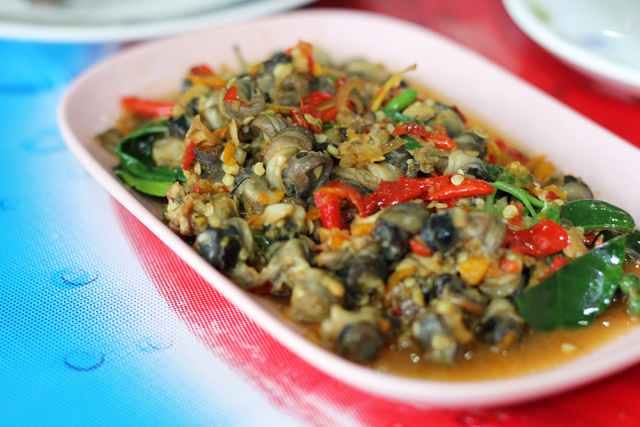 Next up were the bitter river snails stir fried with a generous amount of krachai (Hoy Comb Pad Cha หอยขมผัดฉ่า).

The snails were conveniently de-shelled and just slightly rubbery, not a bad thing, I like the texture. Again, the flavor was extremely fresh, including plenty of chili peppers, kaffir lime leaves, fresh green peppercorns, and garlic. 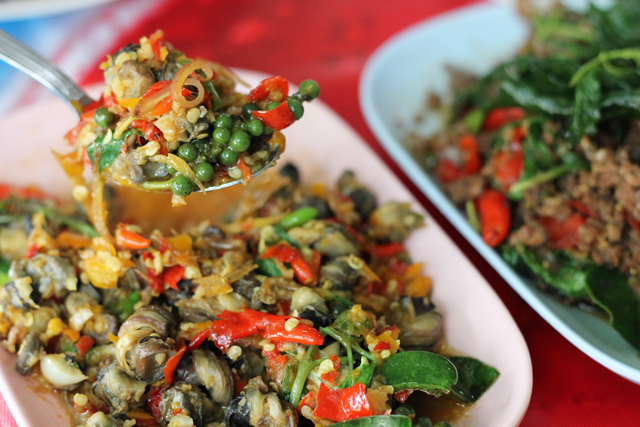 Here’s a colorful bite of the snails (หอยขมผัดฉ่า). I absolutely love Thai green fresh peppercorns. They are mild, not spicy, but every little ball is a bomb of peppery flavor.

Every dish we ordered was beyond delicious and prepared to perfection, but out of everything, even more than the Thai jungle curry, I fell in love with the minced quail prepared kee mao (drunken) style (Nok Sab Pad Kee Mao นกสับผัดขี้เมา). 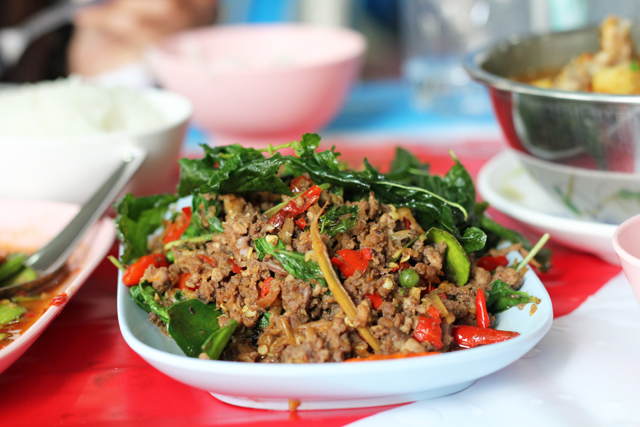 The best dish of the meal!

The quail was ground up, quite a few bones included, so it was a little crunchy at times, but tasted almost like ground beef.

A variety of spices, intense chillies, fried kaffir lime leaves, and dark soy sauce made it extraordinary. My favorite dish of the meal! 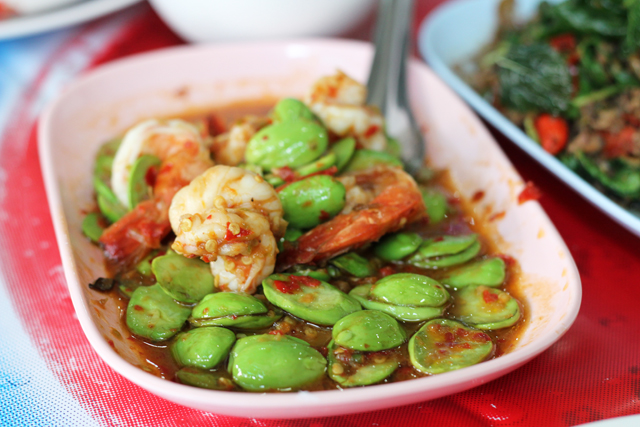 And just for good measure, being a die-hard stink beans fanatic, I simply had to order the Goong Pad Kapi Sataw (กุ้งผัดกะปิสะตอ). 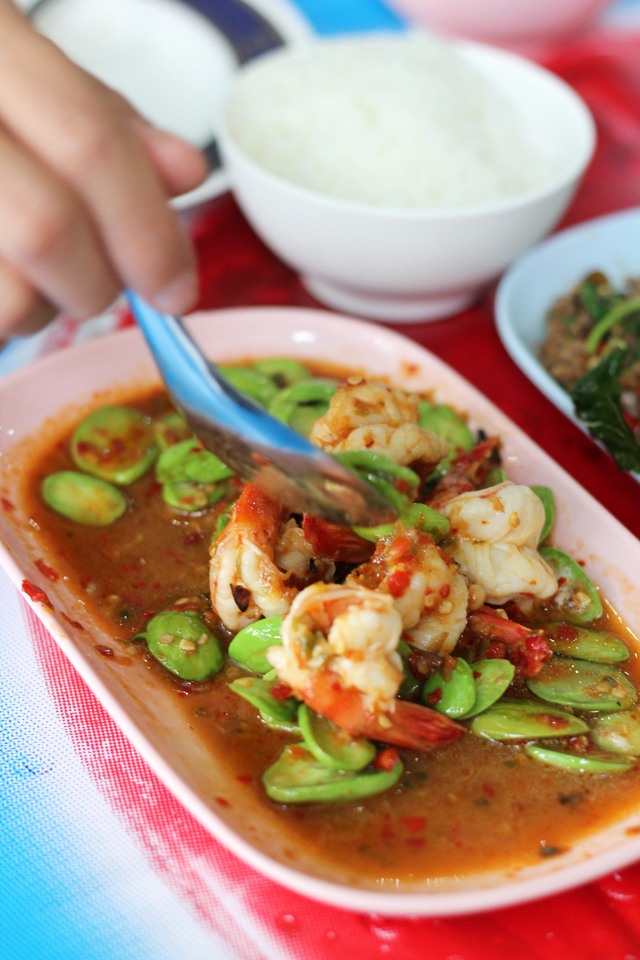 The shrimp were big and meaty and the plate included a generous helping of the luscious beans. Another bonus was that it was fried in a combination of chillies and fermented shrimp paste for even more extreme delicious flavor. 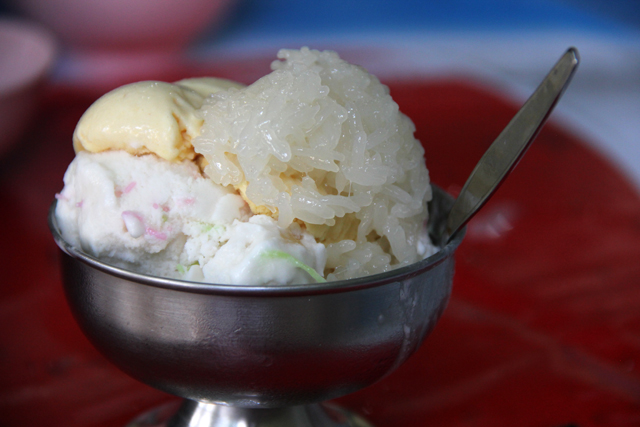 And last but not least, nearly everyone that enjoys a meal at Ran Gaeng Pa Sriyan (ร้านแกงป่า ศรีย่าน), cools down the mouth and eases the stomach with a final course of ice cream topped with sticky rice.

The coconut ice cream was alright here as well, but not the best I’ve had. However, ice cream after spicy jungle curry really hits the spot. 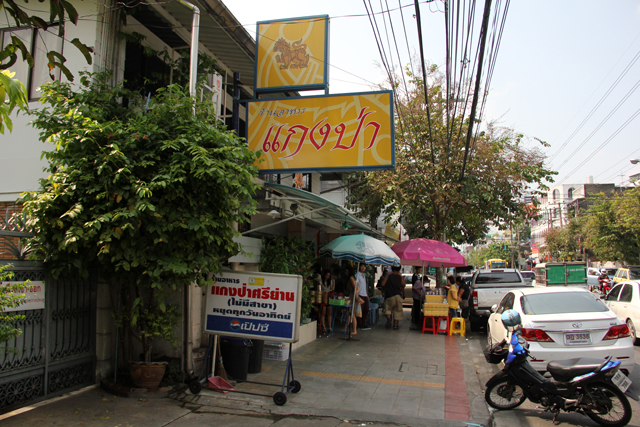 The food is astonishingly good, I don’t think they do anything wrong.

The jungle curry is amazing, and I’m sure it would be fantastic with whatever choice of meat you choose. The minced quail, my particular favorite, was sensational.

I’d add that the flavors are very strong and they use a lot of chillies in their cooking, so this is very much a spicy lover’s restaurant.

Check out the full video of this awesome meal!

Ran Gaeng Pa Sriyan (ร้านแกงป่า ศรีย่าน) is located just a few blocks from the Sriyan Market. The closest BTS station is Victory Monument and from you’ll either need to take a direct taxi for about 60 THB or take bus #14 from Victory Monument.