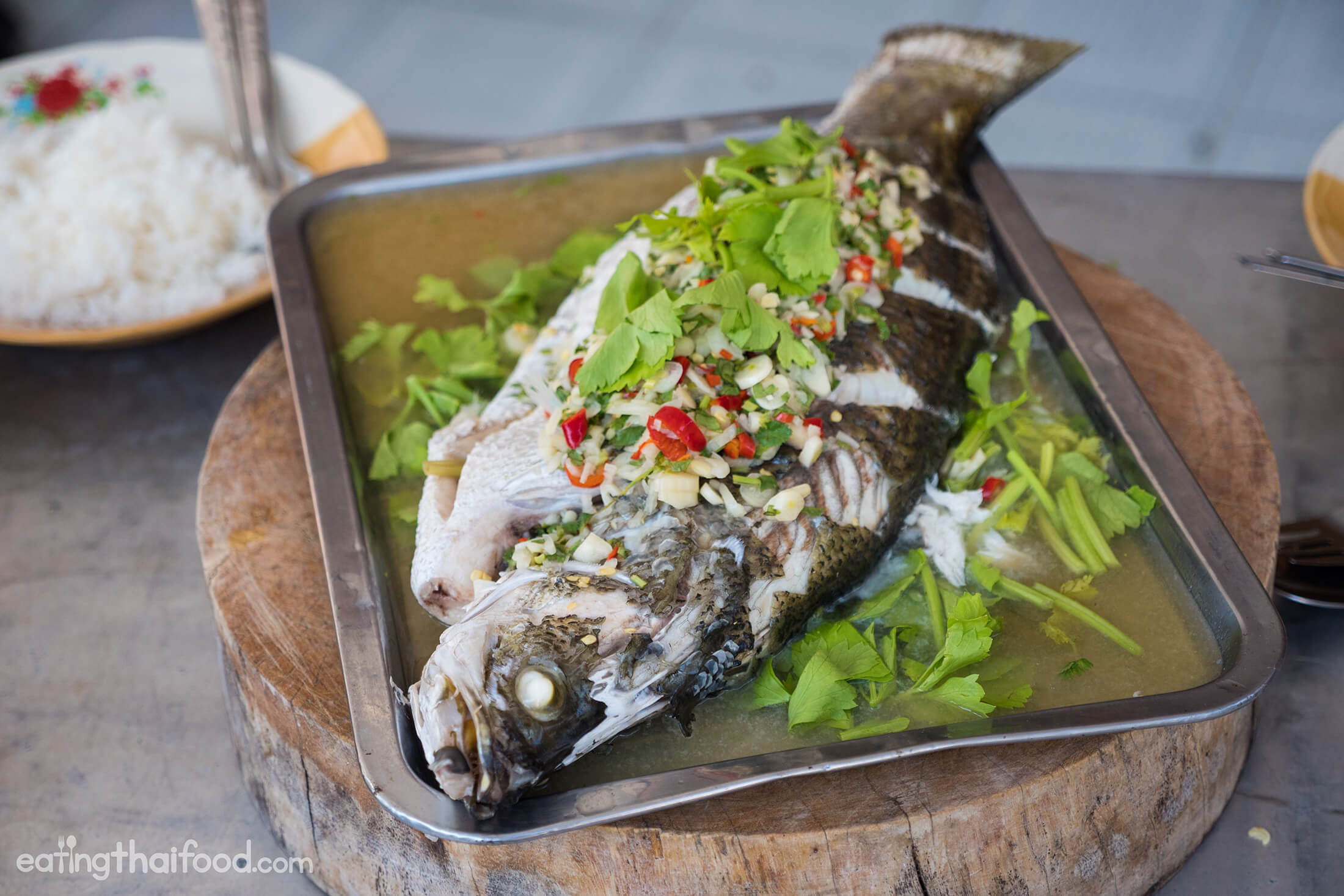 Whenever Ying and I go to a Thai seafood restaurant, one of the frequent dishes we order is pla kapong neung manao (ปลากะพงนึ่งมะนาว) – a steamed barramundi fish, in a sauce (or more like a soup) made with lots of fresh lime juice, garlic, and chilies.

It’s a marvelous Thai steamed fish dish, and being sour, spicy, garlicky, and well balanced in taste, it’s a Thai dish that really portrays the contrast and excitement of flavors in Thai food.

The great news is… this recipe is quite easy to make, as long as you can get a fresh fish. Let’s get started.

For this fish recipe, I teamed up with Pai from Hot Thai Kitchen – she’s not only an amazing chef but she also makes fantastic videos on her YouTube channel.

She was in Bangkok visiting relatives over the holidays, and we took the opportunity to hang out, and cook up a giant barramundi, fresh from the market.

The ingredients listed in this recipe are from Pai, so a big thank you to her for sharing with us her recipe.

If you want to get straight to the recipe, you can scroll down to the recipe box below. Or you can keep reading from here to get a more in depth explanation of Thai steamed fish with lime and garlic.

There are really just 2 parts to this recipe: the fish and the sauce (which is kind of eaten more like a soup in Thailand).

We’ll start with the fish…

Barramundi is the most common fish for this recipe

Although you could use a different type of fish, like a tilapia, red snapper, or a grouper, the most commonly used fish for this dish in Thailand is a pla kapong (ปลากะพง), which in English is a barramundi.

Fish come in many different sizes, ranging from 1 kilo or less, to huge. The day I went to the market, the selection the fishmonger happen to be on the big side, and so Ying and I picked up a 2 kilo barramundi – pretty large – and I wasn’t complaining.

Make sure your fish is scaled and gutted, which you can either do yourself, or have the butcher do before hand.

Next to prepare the fish, make three score cuts all the way through the fillet of the fish, down to the bone, perpendicular on both sides of the fish. This will help the fish to cook faster and also ensure that more flavor gets down into the meat of the fish.

All the flavor of the steamed fish comes from the lime juice dressing, so the actual fish doesn’t need any kind of seasoning, other than a few stalks of lemongrass for fragrance stuffed in the cavity for aroma.

Chop off the top halves of the lemongrass and discard, then bruise the bottom stalks of the lemongrass, and insert them into the cavity of the raw fish. This is just going to give the fish a nice fragrance, and remove some of the fishiness. 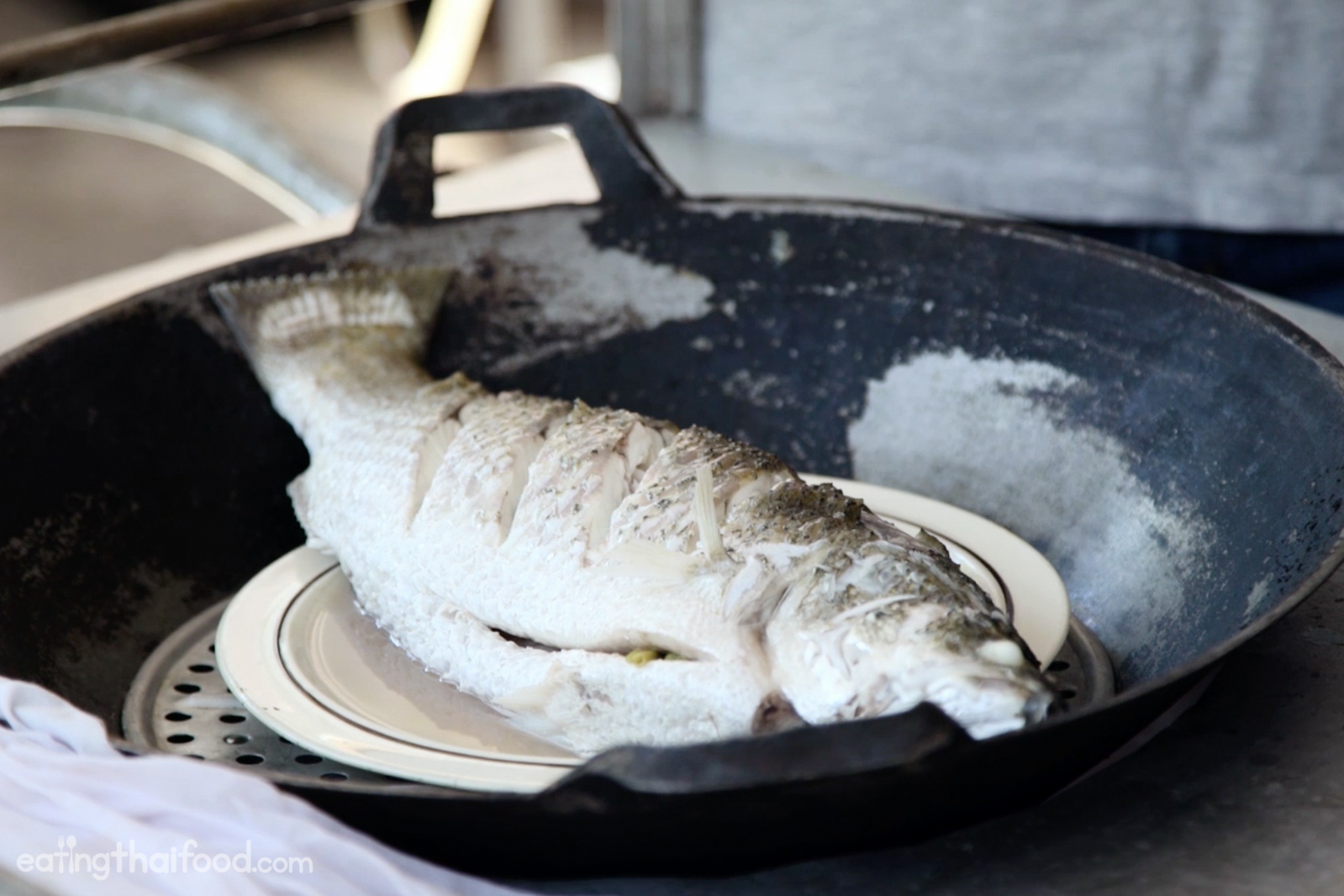 You can be creative when steaming!

Using a steamer device, or whatever you can come up with – Pai and I used my mother in laws big sized old wok – you’ll need to place some water in the bottom, elevate the fish on a plate above the water, and still have enough space to place a cover over the pan or wok to seal in all that steam.

Steaming is a really fun style of cooking, because you can really create or homemake your own steamer… just as long as there’s somehow boiling water at the bottom, and that the thing you’re steaming is elevated above the steam of the water, and there’s a seal to keep in all that steam.

One of the worst things about steaming fish is overcooking it. It goes from potentially marvelous to horrible.

So it’s really important to keep watch over your fish when you steam it, and and know about the right length of time that you’ll need to steam it.

For a medium sized 1 – 2 kilo fish, the target steam time is about 10 – 15 minutes. But you do want to monitor it, especially right about the 10 minute mark so it doesn’t get overcooked.

To check the fish, take a fork, and press the meat of the fish. It shouldn’t be slimy, and it should be firm to the touch. Also, take a look, and make sure the fish has turned white in color as opposed to the transparent look of raw fish.

We’ll get back to the fish, but for now let’s move onto the sauce. 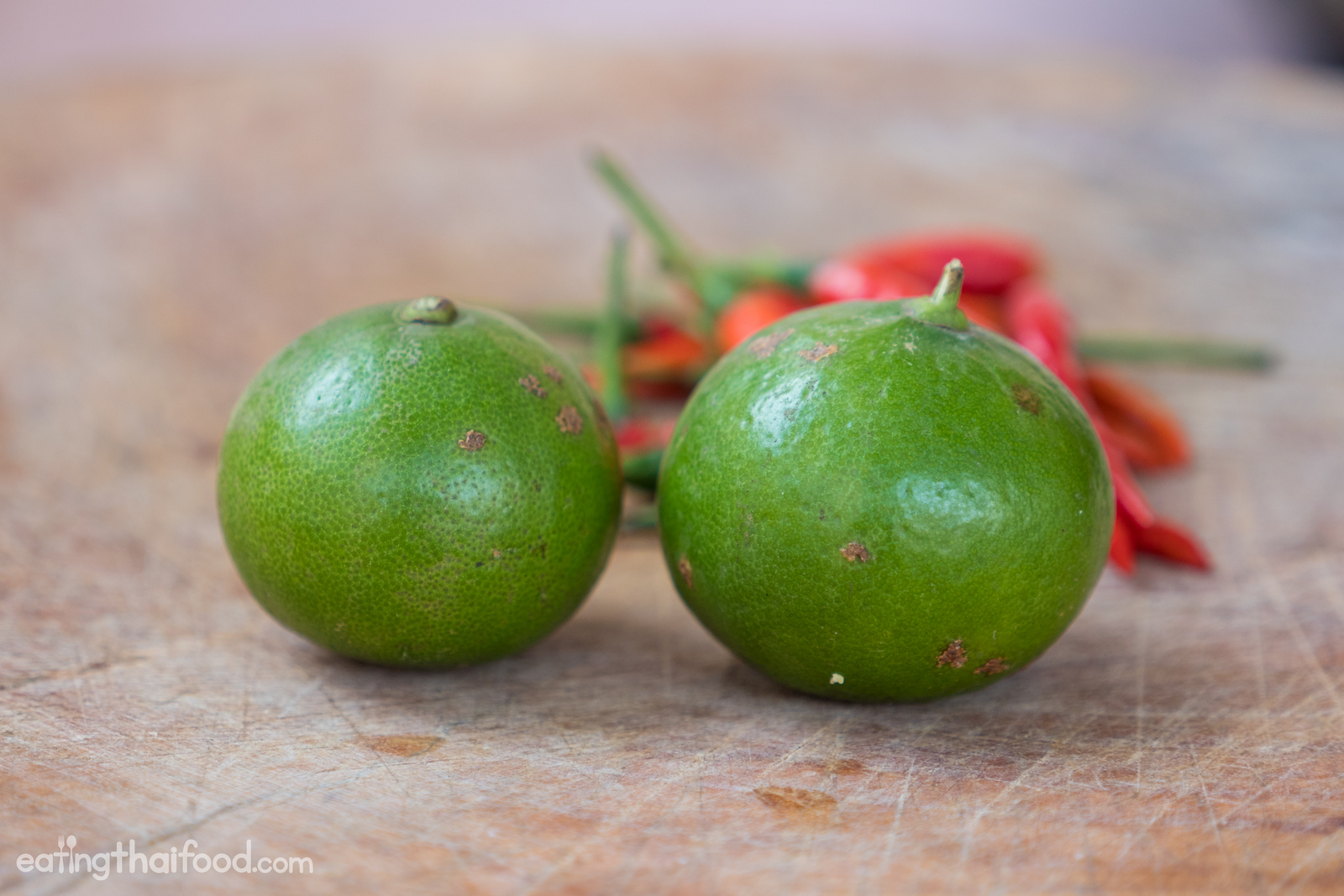 Limes are really important in this recipe

For the next part of this recipe, we’re going to make the sauce. And keep in mind that you can make the sauce while the fish is steaming so that both parts of the dish are ready to assemble at the same time.

In a saucepan, bring the chicken stock to a quick boil, then toss in the palm sugar, and stir until dissolved. That’s it for the cooking. Turn off the heat, and then pour the broth into a mixing bowl.

In the mean time, start preparing what I consider my two favorite ingredients in the world: chilies and garlic.

Peel 2 heads of garlic and then coarsely mince them, they don’t need to be too fine, and sometimes when you order pla kapong neung manao (ปลากะพงนึ่งมะนาว) at Thai restaurants, they will even leave the cloves almost whole, or in slices. So you can chop the garlic whatever size you want, but a coarse mince is a good idea.

You can use as many Thai chilies as you like

For the chilies, use a good handful, and you can use as many or as few as you’d like.

We used about 6 Thai birds eye chilies in the recipe this day, though I would have been quite happy with a few more handfuls.

Dice the chilies and then set both the garlic and chilies aside. 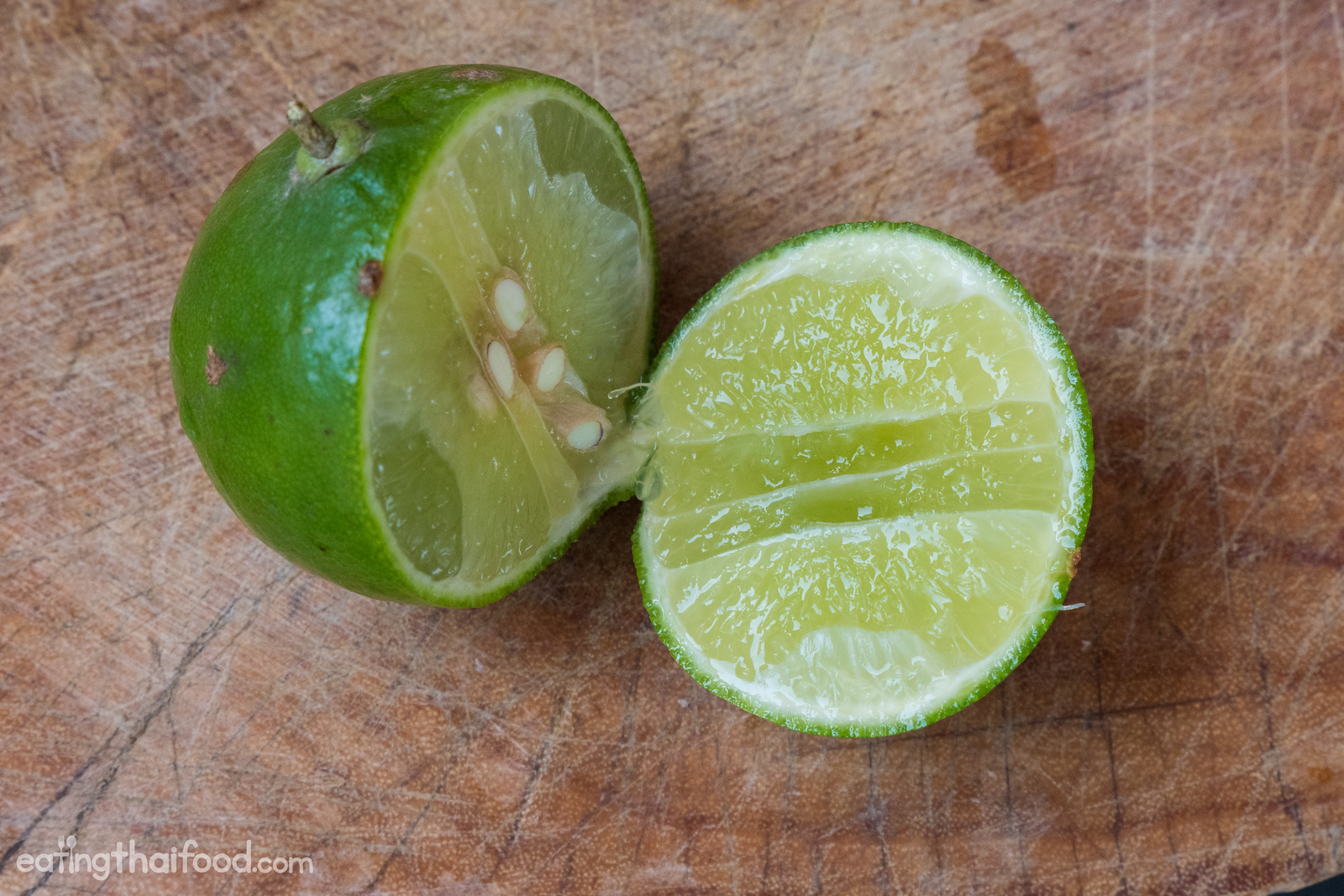 Go back over to the bowl of chicken stock and dissolved palm sugar, and add in the fish sauce, freshly squeezed lime juice, chopped cilantro, and then toss in the minced garlic and chilies, and mix around carefully.

The broth should still be warm, and it will just slightly wilt the garlic and chilies, without cooking them, so they will still retain their wonderful raw harshness.

Make sure you taste test the sauce, it should be sour enough to make you close your eyes, and balanced out by the sweetness of the palm sugar. Add more sugar, lime juice, or fish sauce as needed.

It’s important to know that the sauce is should somewhere be in-between a sauce and a soup – in Thailand it’s eaten more like a soup.

Time to combine the fish and sauce

Assembling the fish and sauce

The final process of cooking pla kapong neung manao (ปลากะพงนึ่งมะนาว) is to assemble all the fish and the soup.

In Thailand often the fish will be served in an elevated pan with fire on the bottom to keep it hot. The fish shaped pan looks pretty cool, but isn’t necessary.

However, you really do need to find some kind of pan or platter that can fit the fish, and that has edges to be able to accommodate all the lime juice sauce / soup.

Pai recommends tearing off some leaves of Chinese celery to garnish the bottom of the fish. Our fish was so big that we had to use a metal serving tray, which worked out quite perfectly.

Gently scoop out all the chilies and garlic and chunky ingredients of the sauce over the fish, and then pour over the rest of the lime juice sauce, making sure to coat and cover the entire fish.

Make sure you have some fresh steamed rice to go with it, and then start digging into the fish. You can take bites right off the side of the fish, eat with rice, and then follow with a spoonful of the sour lime juice soup. 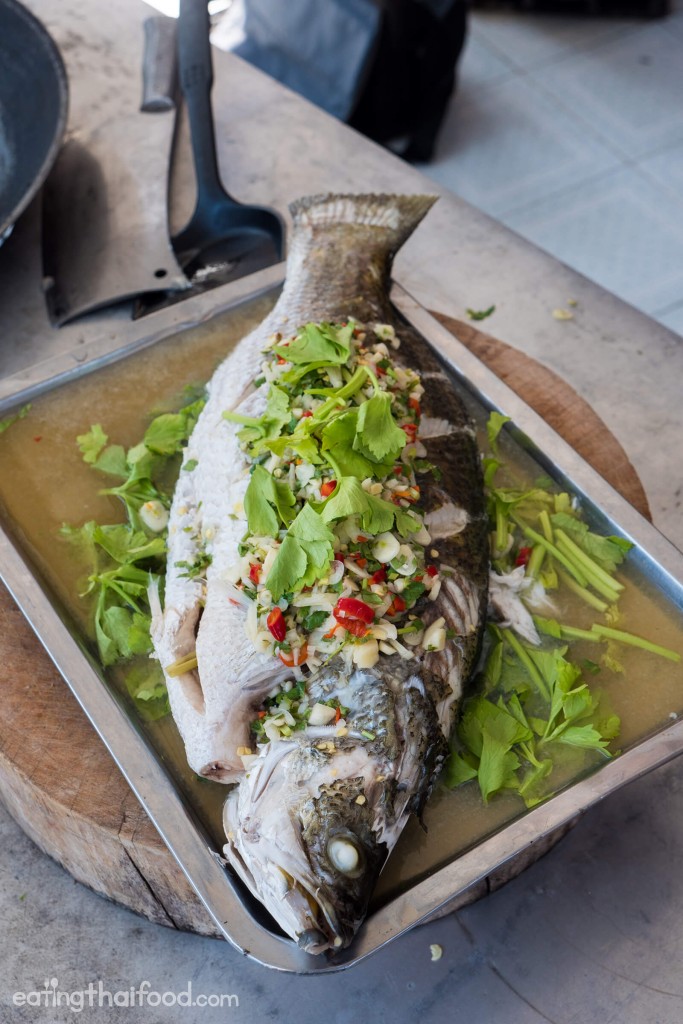 5.0 from 23 reviews
Steamed Fish With Lime and Garlic Recipe (ปลากะพงนึ่งมะนาว) 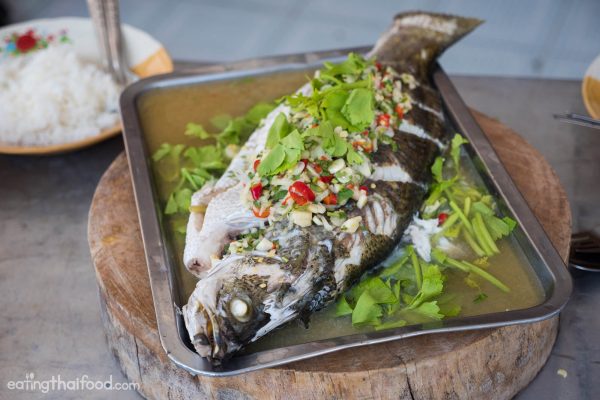 And the great news is, you don’t have to wait to eat it at a restaurant, but you can make it yourself at home. This recipe is quite simple, and as long as you can get a fresh fish, you can make this at home and it takes just about 30 minutes to prepare.

I want to say a big thank you to Pai from Hot Thai Kitchen for sharing this recipe!

Give it a try, let us know what you think in the comments below.