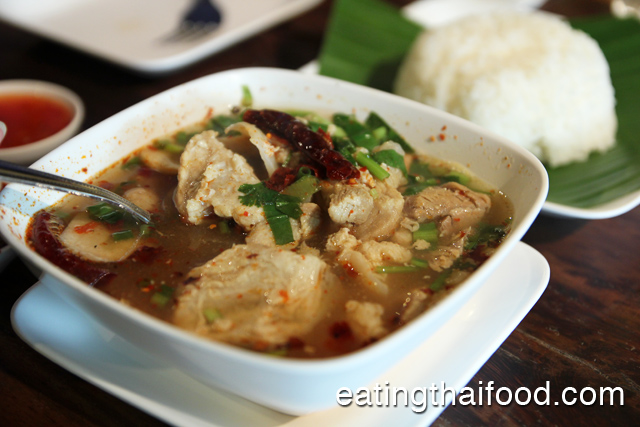 Having received plenty of praise, including a “best som tam” in Bangkok award from CNNGo.com, Som Tam Nua is a very famous Thai Isaan restaurant in Siam, Bangkok.

I had never eaten there until a few weeks ago, I was on assignment to make a video about some of the top things to do in Siam, and wanted to includ Som Tam Nua in that video.

Som Tam Nua is a restaurant where people line up outside, waiting their turn for seats. Luckily the day we went, we waited just five minutes before entering.

First up (pictured above) was a bowl of tom saap kraduk moo on (ต้มแซบกระดูกหมูอ่อน), sour Isaan soup filled with meaty pork bones. It was nice and sour as it should be, quite spicy, and the bones had plenty of tender pork still on them. Very good tom saap! 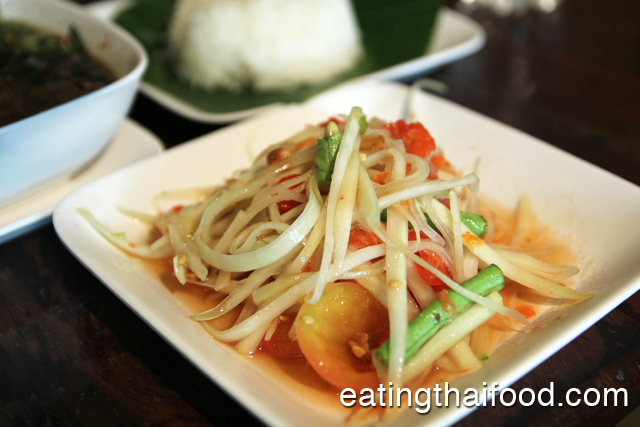 For our first dish of som tam, we ordered their normal som tam Thai (ส้มตำไทย).

So does Som Tam Nua have the best in Bangkok?

It was mildly spicy, nicely sour, but a little too sweet. It was alright, but not the best som tam I’ve had. The latter dish, som tam muah, which you’ll see below, was excellent. The ingredients in the som tam though, were very fresh and the papaya was crisp. 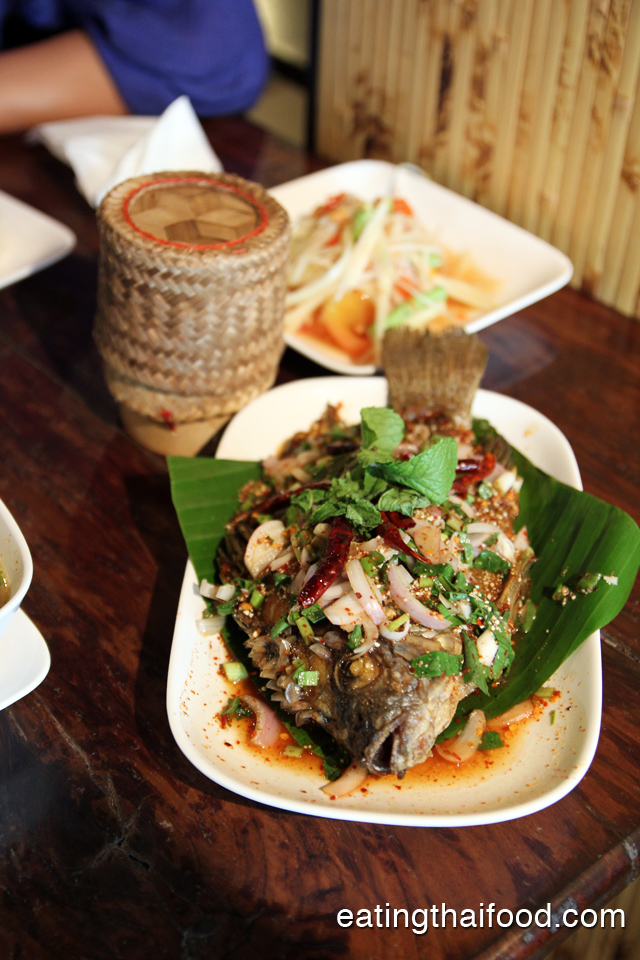 It was a little tilapia deep fried to a crisp and topped with a good selection of larb ingredients like red onions, herbs, chilies, and mint leaves. The dressing included lime juice and fish sauce, chili flakes and toasted rice.

It was pretty good, nicely sour from lime juice, but perhaps a bit too salty. Good, but not compared to the nam tok pla tod at Som Tam Boo Maa. 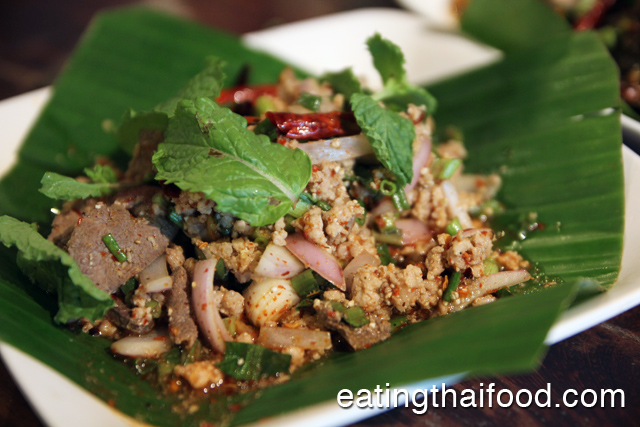 It was a nice mixture including some lovely chunks of liver and nice chunks of red onions. I also love the whole dry chilies. 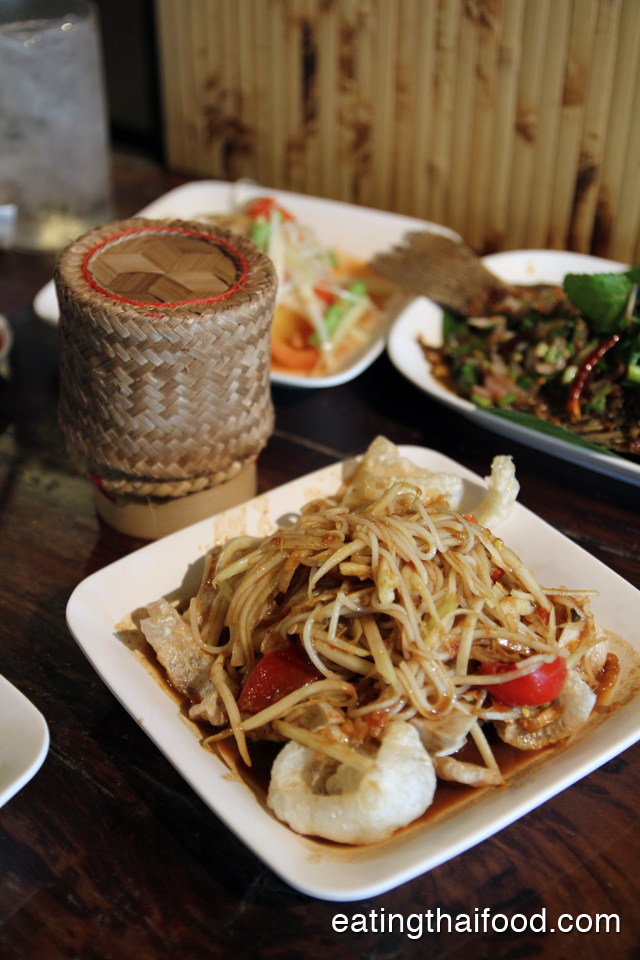 Last, but not least was tam muah (ตำมั่ว), a mix salad including a bit of everything. This was the winning dish for me, the dish I would come back to again for!

Kanom jeen noodles, green papaya, tomatoes, eggplant, and fried pork skins were the main ingredients. The dressing included fish sauce, lime juice, and a perfect amount of fermented fish sauce (pla raa). It was quite spicy and had some wonderful flavor to it. 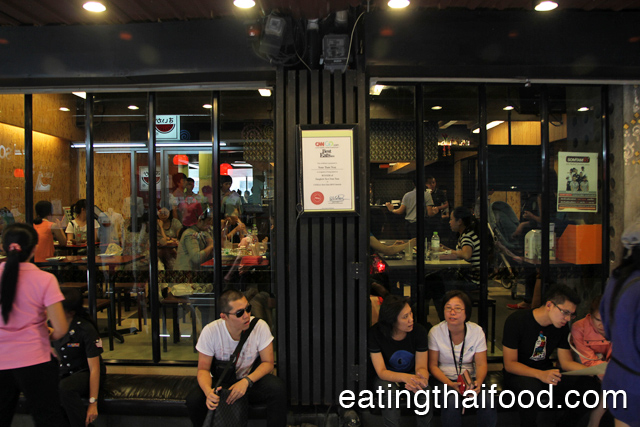 I’ve read about a few others that said the flavors were toned down to cater to foreigner tastes, but that was not the case for our meal. Everything, apart from the som tam Thai, was very sour and quite spicy – on the spicier and more sour side of average Thai. I was very pleased.

By far my favorite dish was tam muah (ตำมั่ว), the mixed salad (but only order this if you enjoy fermented fish).

If you’re in Siam and looking for good Isaan food, Som Tam Nua is a good choice. It’s always packed full of Thais. Also, if I went back, I’d order their fried chicken, it looks amazing!

Som Tam Nua (ส้มตำนัว สยามสแควร์) is on Siam Square Soi 5. Across the street from Siam Paragon, find Siam Square Soi 5, walk down (there might be some construction taking place), and you’ll see the yellow and brown sign with a crowd normally standing outside.