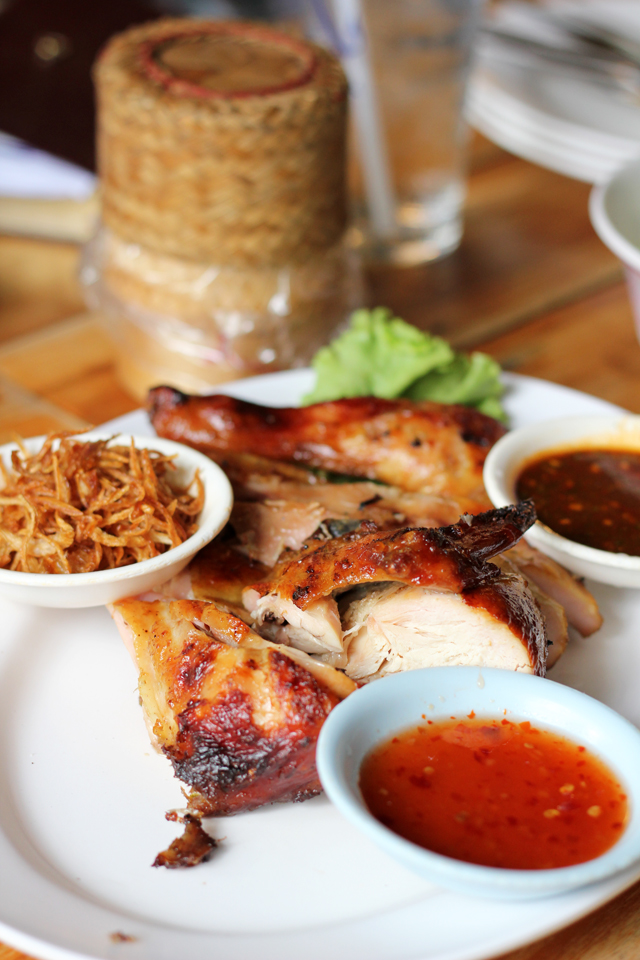 Central Sukhumvit Road (Nana to Ekkamai) has been taken over by condos, hotels, and shopping centers – everywhere you look there’s a new high rise sprouting up.

There are gems that have survived, like Yong Lee, the shophouse Thai Chinese restaurant for instance. But there are less and less comfortable everyday restaurant options.

It’s not exactly a family run home style establishment (it’s grown quite large now), but it’s still open air (though they do have an air conditioned room), comfortable and easy going.

Though they serve Isan food in general, the menu really has a broad range of Thai cuisine, including some southern Thai dishes as well. 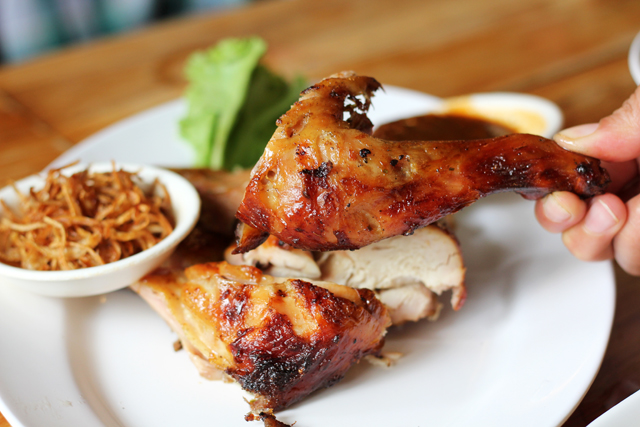 If a restaurant includes a dish within their name, while it’s not mandatory, it’s a bit of an indicator that they may make that particular dish quite well (at least we can accurately hope that).

Grilled chicken (gai yang ไก่ย่าง) being the second part of their name, makes it a rather safe bet.

And you won’t be dissapointed with the grilled chicken at Sabai Jai Gai Yang.

The piece I was served was cooked just right, not dry, and flavored just right. It was served along with condiments that included fragrant fried onions, sweet and sour nam jim gai yang (Thai chicken sauce), and another dry crushed chili Isan sauce. 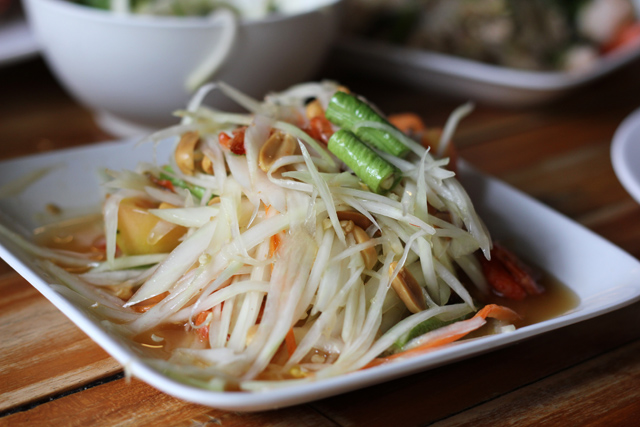 The som tam Thai (green papaya salad ส้มตำไทย), although being quite on the mild side of chili, was fresh and nicely balanced. 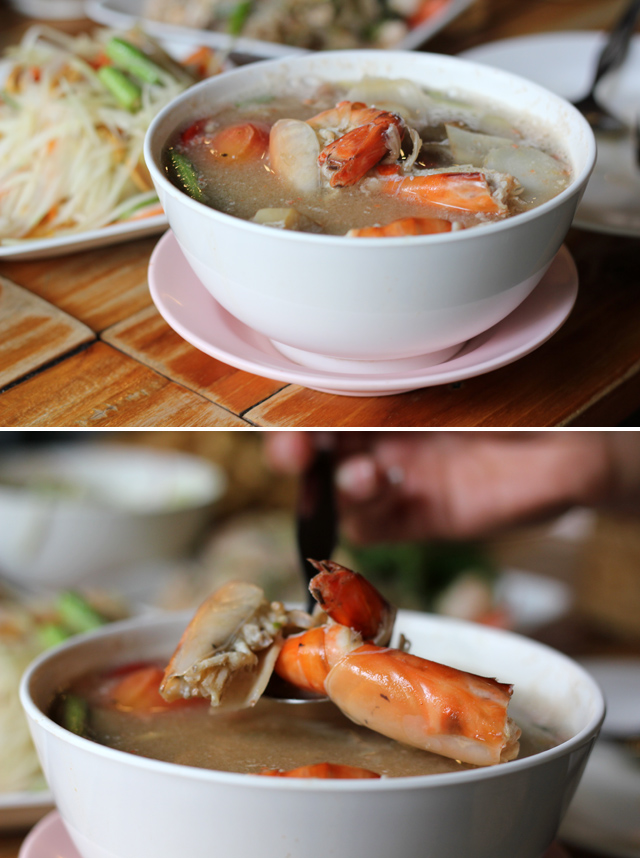 Big shell-on prawns and a nice medley of vegetables filled the soup. But it was the broth that I really enjoyed, very strongly flavored with lots of galangal and lemongrass – more so than other tom yum’s. From the potent galangal, the soup gave a little sting going down the throat. 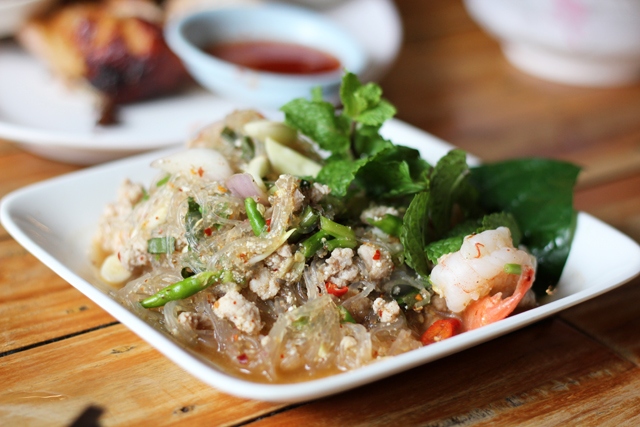 It was pretty good, I liked the addition of glass noodles so it wasn’t pure pork, like the common larb. 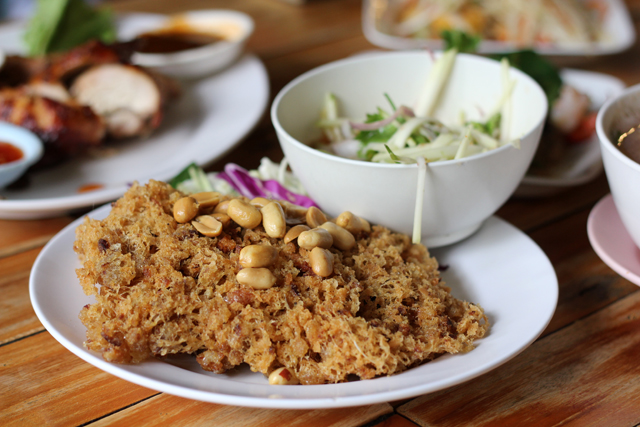 The yam pla duk foo (fried catfish with sauce ยำปลาดุกฟู) could have been a little fluffier, but it was crispy and the sauce was nicely sour. 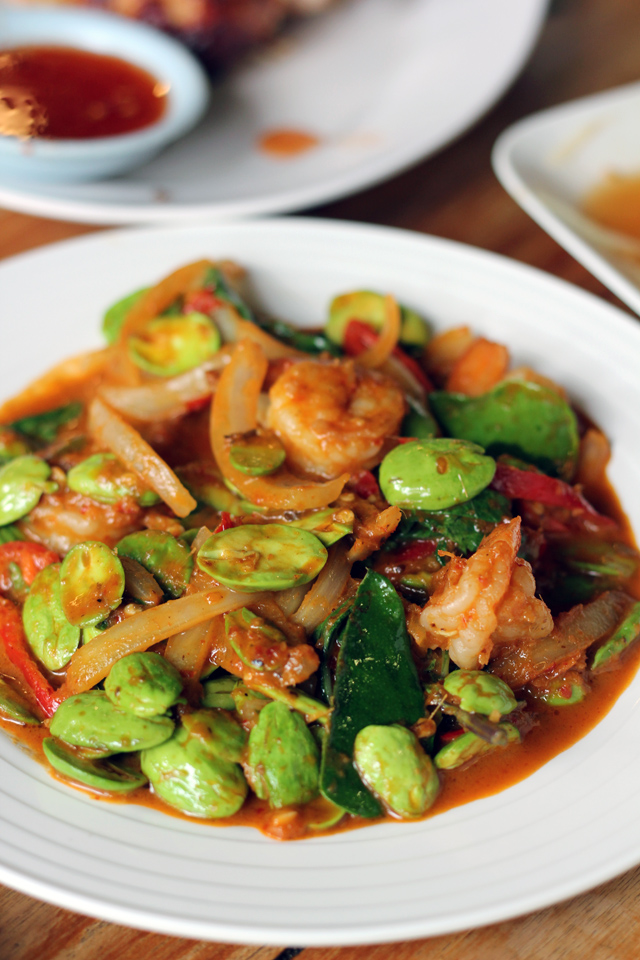 Pad sataw (ผัดสะตอ) – One of the world’s best ingredients

As one of my favorite ingredients in the entire world, it’s virtually impossible for me to see stink beans on any menu, and not order them. So I did.

It was good, but a little on the sweeter side for my taste – I would have preferred the pad sataw a little on the spicier side of the spectrum. That being said, you can’t possibly go wrong with a plate of stir fried pad sataw (ผัดสะตอ).

Sabai Jai Gai Yang (สบายใจ ไก่ย่าง) is an attractive restaurant for a number of reasons. One is that it’s located in the Ekkamai neighborhood where there are less and less local dining options.

Another is that the menu includes just about all genres of Thai food and allows you to order a diverse meal. The giant menu is filled with photos and written in both Thai and English, making it easy for both Thais and foreigners to order a feast.

The ambiance is such that you can just show up in gym shorts or a tank top to enjoy a meal – laid back, nothing fancy, just comfortable.

Prices are a little on the high side in my opinion, but you pay for location, convenience and their good reputation.

Prices: They are not street food prices, it’s more sit down restaurant prices where you’re likely to spend 150 – 250 THB per person for a well rounded meal
Hours: 10 am – 12 midnight daily
Address: Ekamai Soi 1 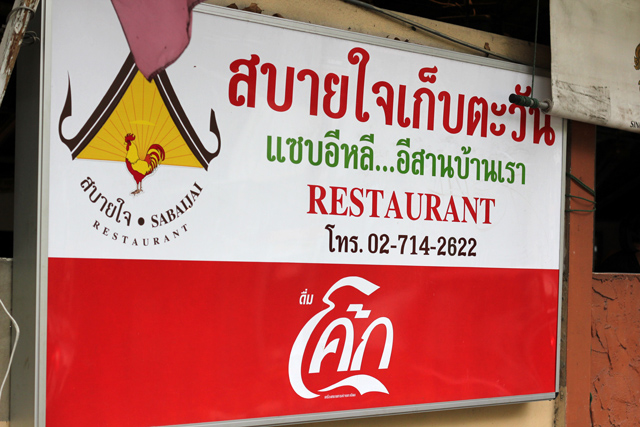 The easiest way to get there is by taking the BTS Skytrain to Ekkamai Station.

Take the exit towards Ekkamai road (also known as Sukhumvit 63) and walk straight until you reach Soi 1. Though it’s the 1st Soi, it’s probably about 1.5 kilometers or so down the road – so a good 10 minute walk.

Sabai Jai Gai Yang is across the street from Health Land Spa, on the left hand side of the road.