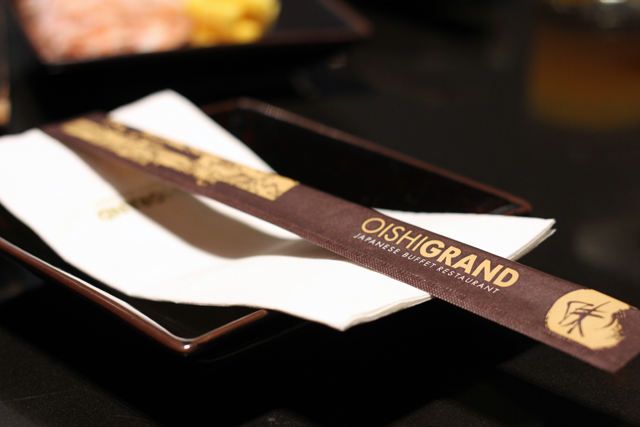 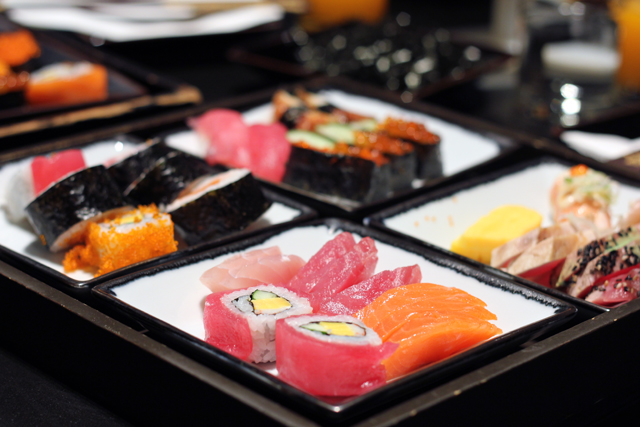 Starting things off with a few rounds of sushi

Like most Japanese buffets, I like to start things out by first hitting the sushi and sashimi section.

There were about 6 different kinds of sashimi and about 10 different hand rolls all freshly prepared. 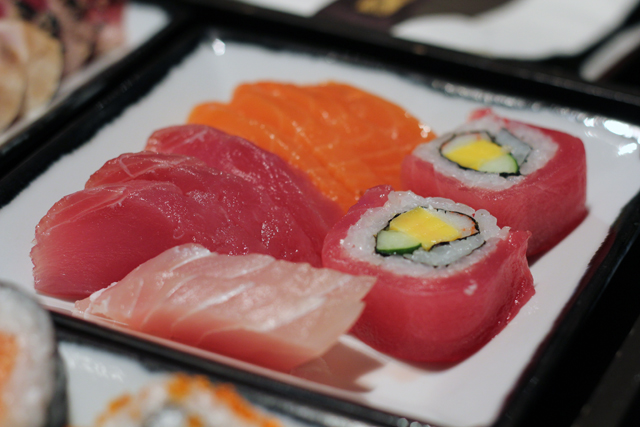 The sashimi was pretty high quality, comparable to the selection at Takumi Japanese buffet.

While normally I’m more of a fan of red flesh tuna sashimi, I actually enjoyed the salmon sashimi the best here. 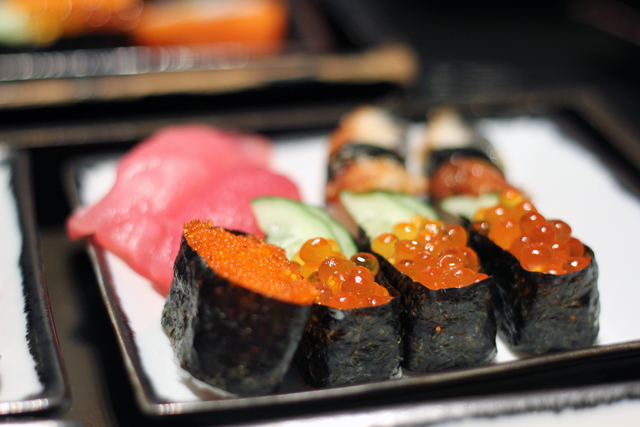 Another attraction at Oishi Grand Buffet (โออิชิแกรนด์) is the orange pearl salmon roe, which aren’t particularly common in Thailand I’ve found, even at sushi restaurants.

I do like salmon roe, but actually prefer the smaller tobiko (flying fish roe), smaller eggs. 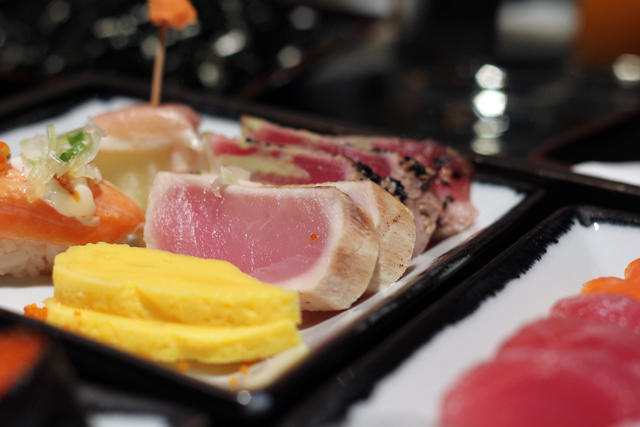 The lightly seared tuna was alright, but kind of dried out compared to the sashimi, so I didn’t go back for more of that. 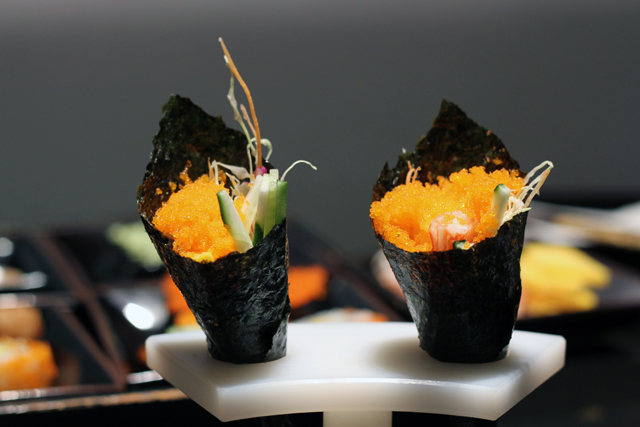 Unfortunately the Thai California rolls didn’t include avocado (which would have made them much better), but they were generously topped with tobiko fish eggs. 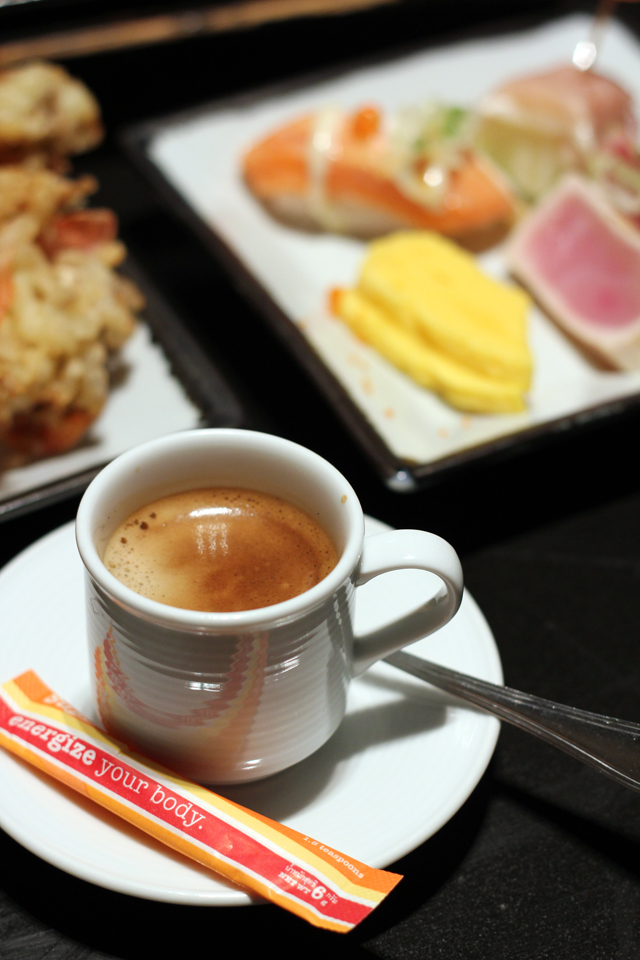 Having a quick shot of espresso

One thing I did love about Oishi Grand Buffet is the full coffee bar.

After the first few rounds of sushi and sashimi, I was ready for a shot of espresso to recharge my eating battery and keep myself alert and focused on the food! 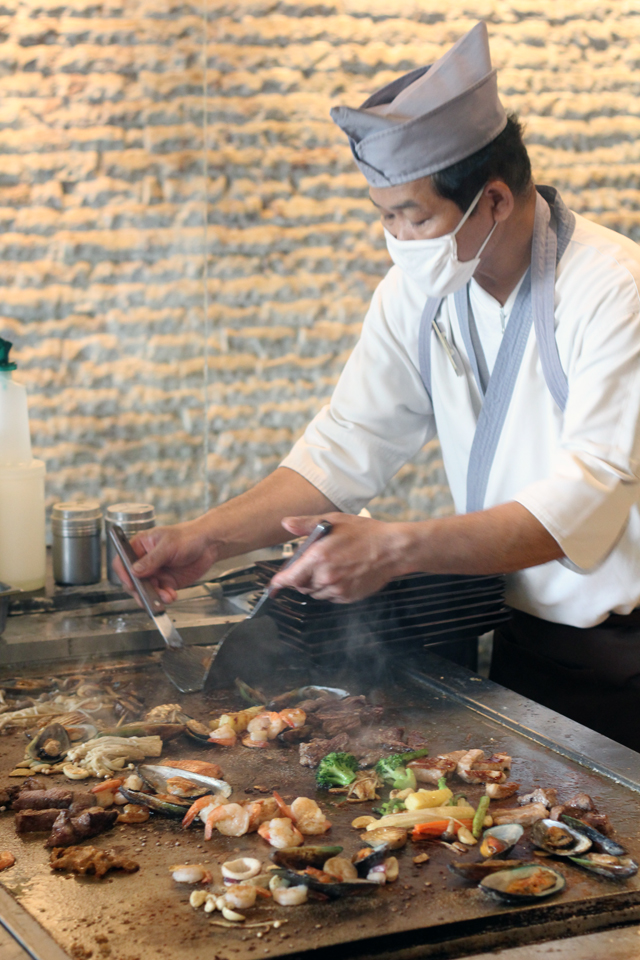 After a good base of raw fish and a shot of espresso I was ready to tackle the grill station.

Choose whatever raw ingredients you like, and the chef will either grill or hot plate fry them, then deliver the cooked food to your table. 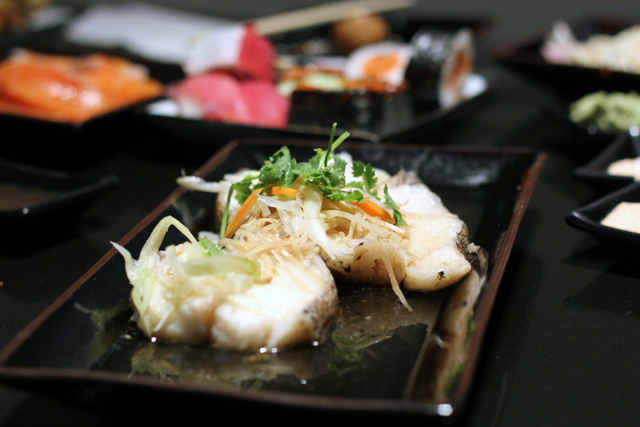 The snow fish, steamed in soy sauce and topped with thin shreds of ginger was excellent. The flesh was soft yet firm, and not even slightly rubbery. It was so good I had back to back platters! 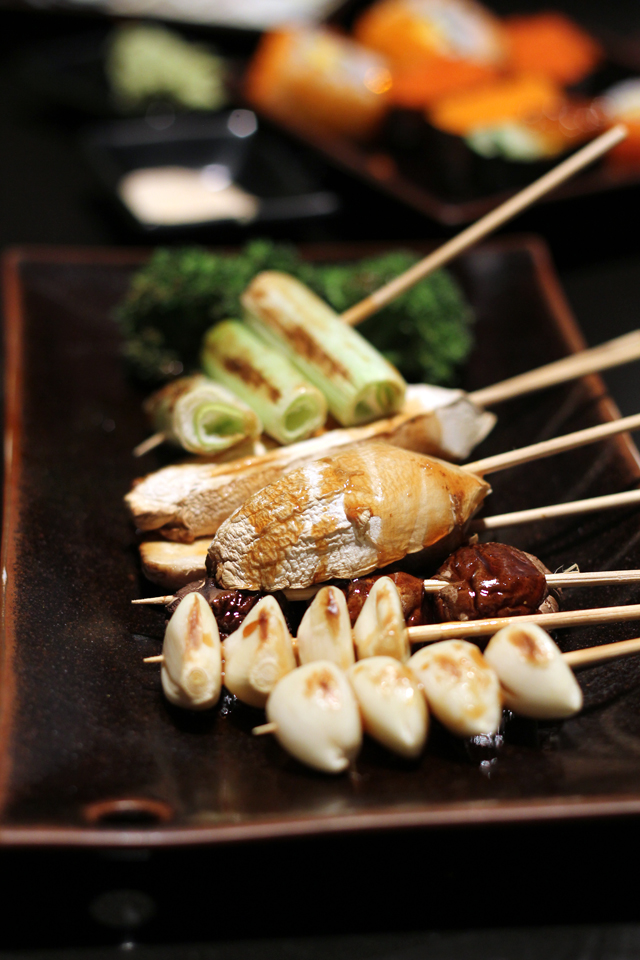 Grilled sticks of mushroom and garlic are a welcome addition to any meal! 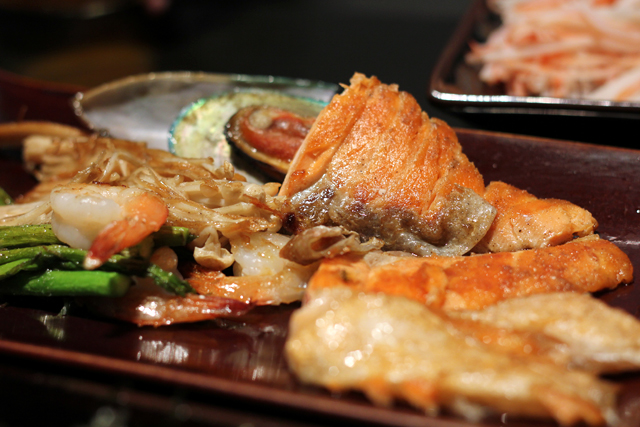 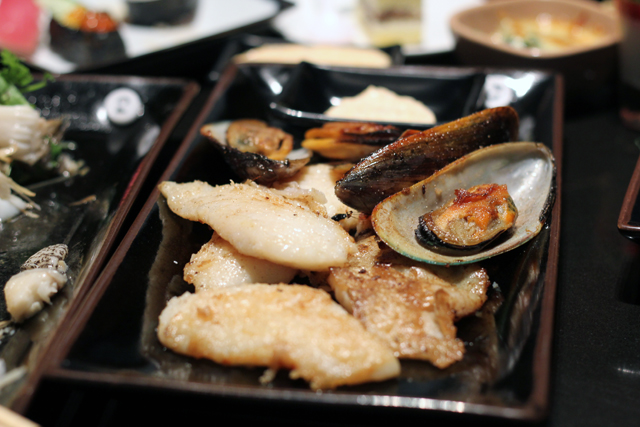 More seafood off the grill at Oishi Grand

The mussels were probably my favorite thing off the grill. They were lightly salted and just pure delicious. 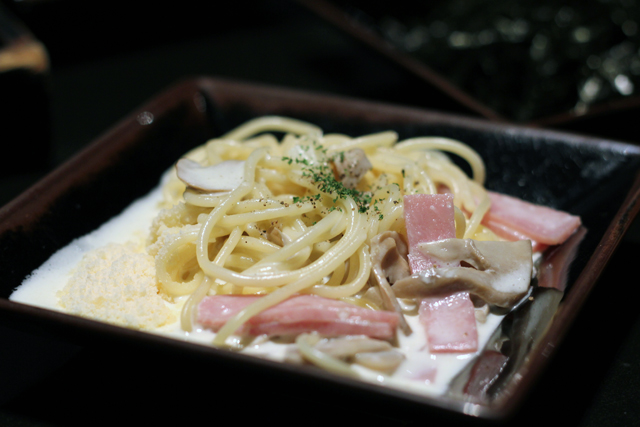 In Thailand, a buffet would not be a buffet without a few random things like spaghetti or pizza.

In fact, at Oishi Grand, there was an entire little pasta station (resembling the pasta stand a ALoft Buffet) where you could order up  a choice of combinations.

I only had one bite of this, and I’d have to say, it was decent. 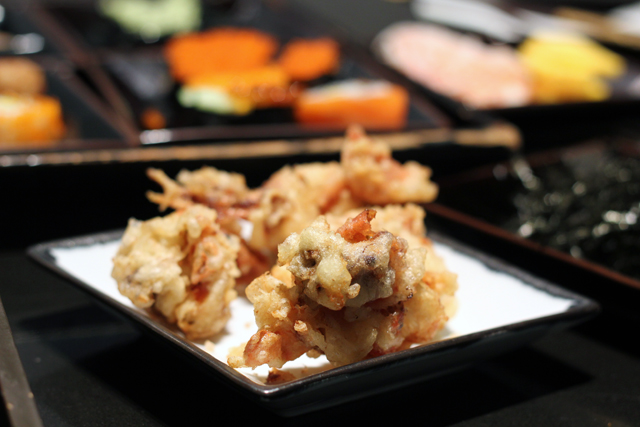 The signature deep friend soft shell crab was alright, but I think I must have grabbed a plate that had sat out a little too long as it wasn’t overly crispy anymore. That being said, it was flavorful. 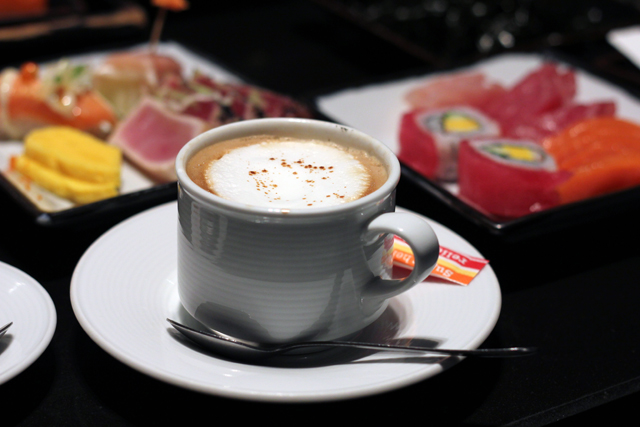 A few more cups of coffee, this time in cappuccino form, and I was ready for dessert. 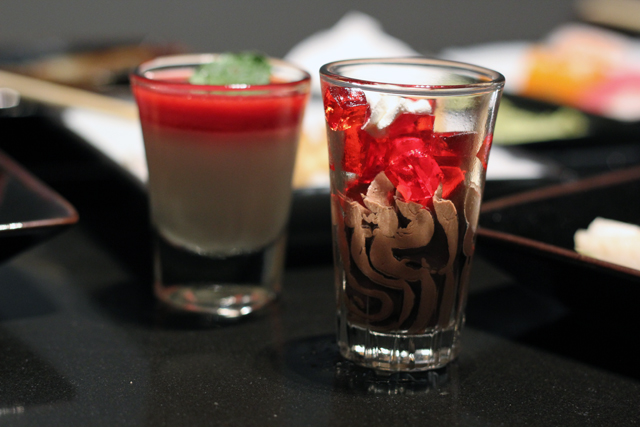 While normally the fancy little desserts at buffets like this look much better than they taste, a few of the sweet treats were actually really well done.

The chocolate mousse (pictured in front), and the raspberry topped white pudding, were both excellent. 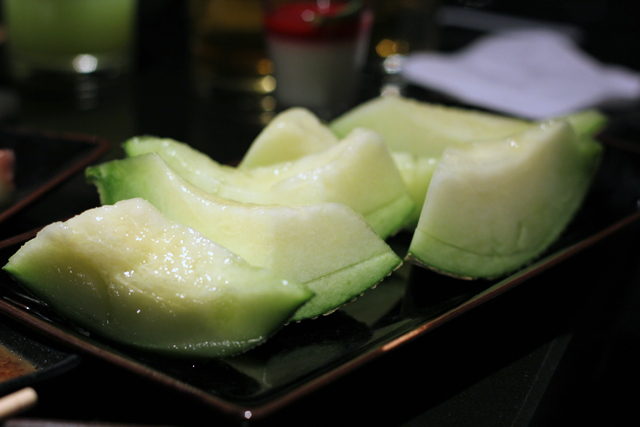 While the Oishi Grand Buffet assortment included a few local fruits, the big hit was the honeydew sweet melon – and it was superbly sweet and juicy. 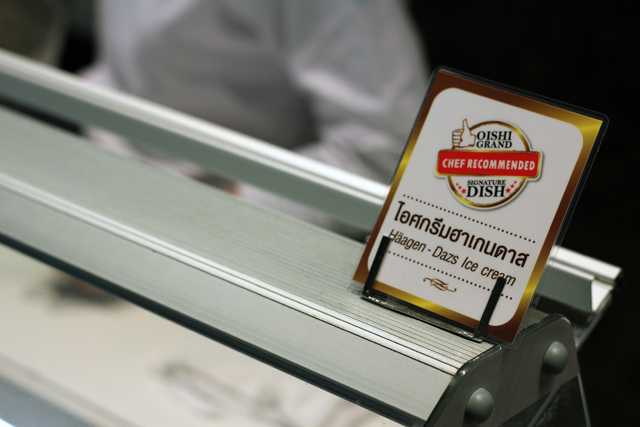 Does the Häagen-Dazs really need to be chef recommended?

One thing I found a little on the hilarious side was that the Häagen-Dazs ice cream was “chef recommended,” and a “signature dish.”

I don’t think we really needed the chefs approval of Häagen-Dazs ice cream (and somehow I don’t think they made it)! 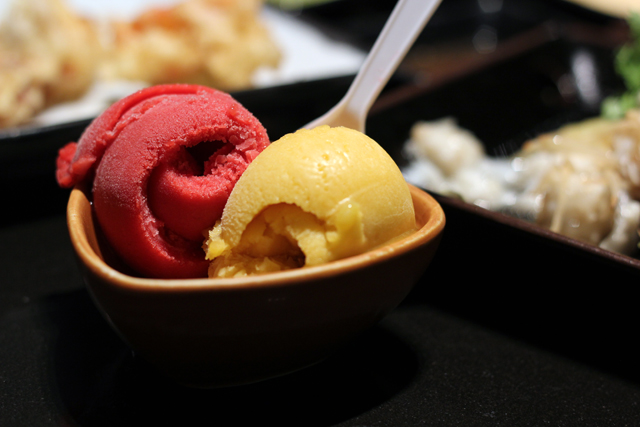 But nevertheless, the Häagen-Dazs ice cream, all-you-can-eat of it, was absolutely wonderful.

If you’re an ice cream lover, you could probably eat 700 THB worth in ice cream alone. I am not ashamed to admit, even though I’m not a sweets kind of guy, I downed about 4 bowls. 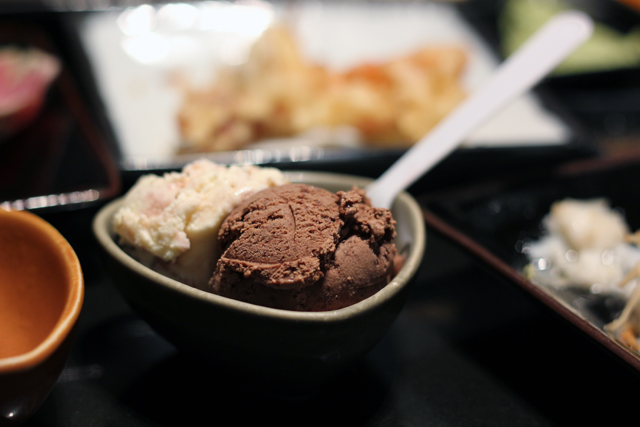 All the ice cream was good, but the Häagen-Dazs chocolate took the crown. It honestly tasted like a shaved chocolate bar mixed with extra cream and then frozen. 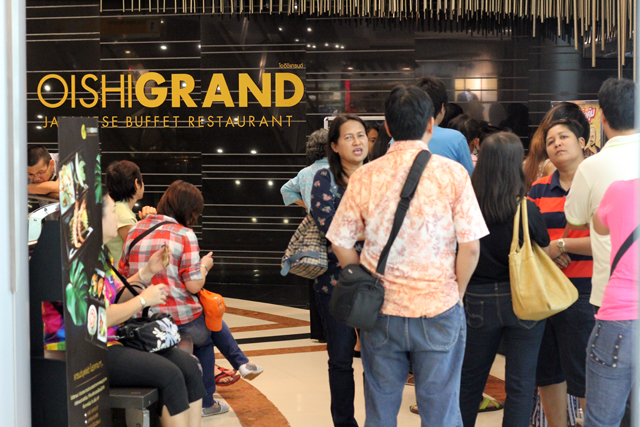 The sushi is fantastic, items from the grill were excellent, the pre-made and fried things were alright but not the best, and the desserts were fabulous. The addition of coffe was also a genius idea.

Oishi Grand Buffet (โออิชิแกรนด์) is right up there in my books along with Takumi buffet as being one of the top Japanese buffets in Bangkok (on the list of top things to do in Bangkok). Takumi is a bit more authentic (no lasagna or spaghetti on the menu) and relaxing (as you sit at your table and just continual order off the menu, instead of getting up and helping yourself), but both offer a similar level of sushi and sashimi.

Oishi Grand Buffet also does a great job with their desserts, and like I mentioned above, if you love ice cream, the Häagen-Dazs buffet is alone worth it!

Lastly, another big bonus is the 3 hour time limit (other places offer just 1.5 hours or so), which is quite a long time to thoroughly enjoy everything without being rushed.

Price: 699 THB per person
Location: One the 2nd floor of Siam Discovery shopping mall
Hours: 11 am – 10 pm daily
Reservations: Oishi Grand has received quite a lot of local hype and is continually busy but doesn’t accept reservations. We arrived at 10:30 am and there was already a line of about 15 people in front of us. So you may have to wait to be seated.

Take the BTS Skytrain to Siam station. Walk to Siam Discovery, go to the 2nd floor and located in the back is Oishi Grand Buffet – there will most likely be quite a few people hanging out at the entrance waiting to be seated.