Krua Aroy Aroy – Good Khao Soi in Bangkok, but not much else… 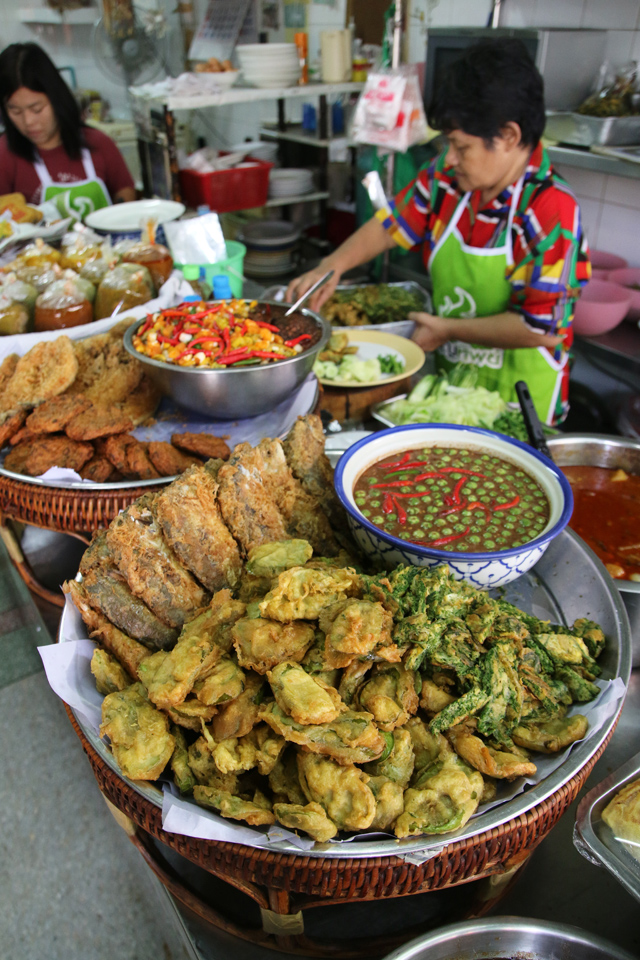 The restaurant has practically been written up in every major media outlet. Finally I was in the area with Christina and we decided to give Krua Aroy Aroy (ครัวอร๊อยอร่อย) a shot.

Unfortunately, the food, in my opinion, isn’t anything to clap your hands about. 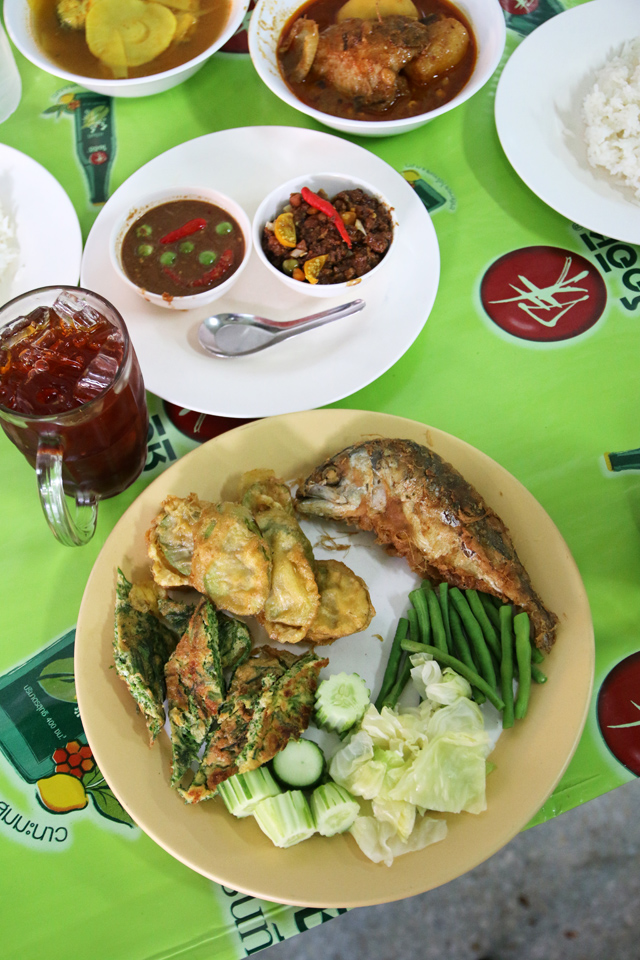 Vegetables and fish to go with nam prik

I was disappointed when two tourists walked in, and without even looking at the curries they ordered plates of “pad thai” all around.

Without hesitation the owner acknowledged their request and made them pad thai (which I learned later is actually on the menu).

Now I’m not saying pad thai is bad to order, but it should NOT be served or ordered at local Thai restaurants that serve rice and curry (that’s just wrong), it should be eaten at a specific pad thai restaurant.

In other words, I think Krua Aroy Aroy (ครัวอร๊อยอร่อย) should have (in their history of cooking) stuck to making their curries, without trying to please every tourist walking in the door demanding pad thai – but I guess this happens when you operate a local Thai restaurant in the midst of the biggest tourist sector of town.

Also, the prices are shockingly high for a local Thai restaurant (and for the dishes we ordered). I almost couldn’t believe our bill after eating!

Anyway, enough of my thoughts, and we’ll get onto the review of the food… 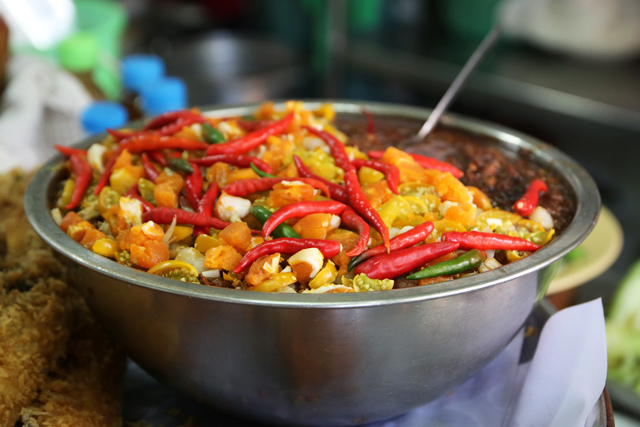 We ordered a varied spread of dishes to sample, including a platter of boiled vegetables paired with cha om kai (acacia shoot omelet) and a fried mackerel to eat with the nam prik chili sauces. 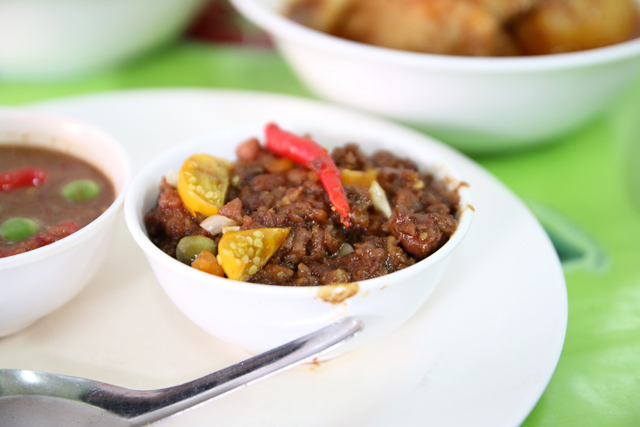 Though it looked like quite a stunner, it wasn’t my favorite due to it being overly sweet.

The nam prik kapi (น้ำพริกกะปิ) also wasn’t anything to rave about, being very one-dimensional and tasting only like salty shrimp paste, rather than balancing that astringent lime juice punch that I love so much about a good nam prik kapi. 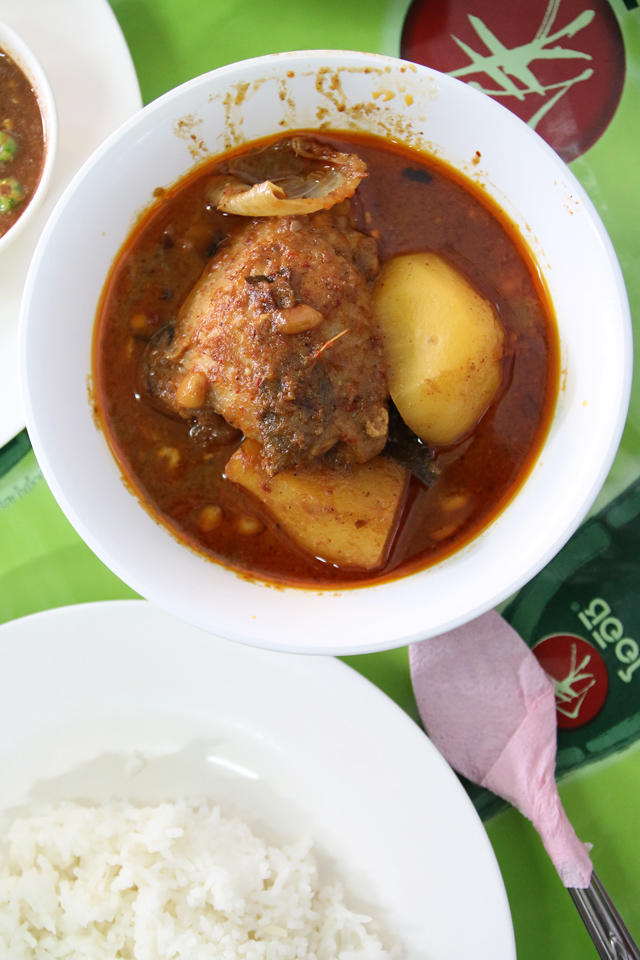 The two dishes that were the best in my opinion were the massaman gai (มัสมั่นไก่ chicken massaman curry) and the khao soi (ข้าวซอย), which were both decent.

Again, the massaman gai (มัสมั่นไก่) was a little on the sweet side, but that’s they way it always is. It did have a great nutty aroma and the sauce was rich. 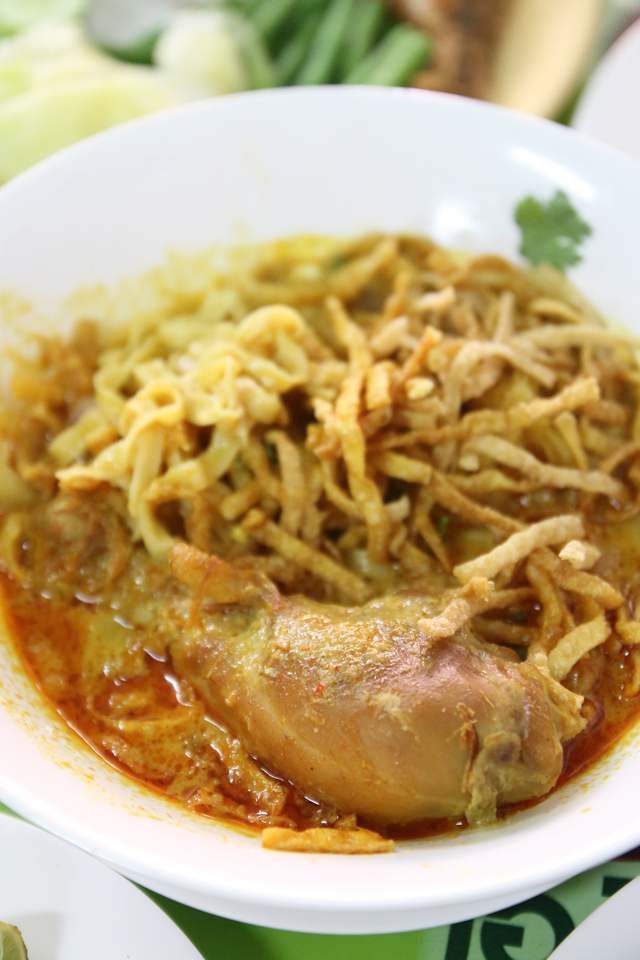 The khao soi (ข้าวซอย) was pretty good, richly flavorful and comforting, and the chicken slid right off the bone. Along with a garnish of pickled mustard greens, a sprinkle of chili flakes, and a squeeze of lime juice, it was good.

In Bangkok, they do a pretty good version of khao soi (ข้าวซอย). 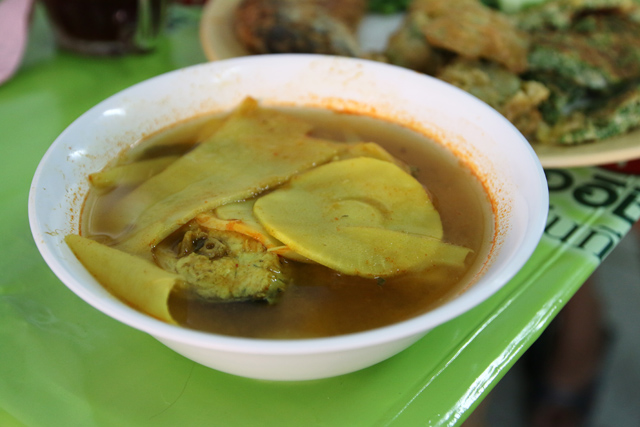 But then I tried the kaeng som (แกงส้มหน่อไม้)…

This was not an attempt at the Bangkok style red tomatoey kaeng som, this was Krua Aroy Aroy’s (ครัวอร๊อยอร่อย) version of southern Thai kaeng som.

Normal southern kaeng som (แกงส้มหน่อไม้) should make any normal person squeal with delight from the pungent-ness of the chilies and sourness.

Their version, on the other hand, was so plain, I didn’t even know if they had added lime juice, and it was so non-spicy, I thought they may have forgotten to add chilies.

It was quite bad. 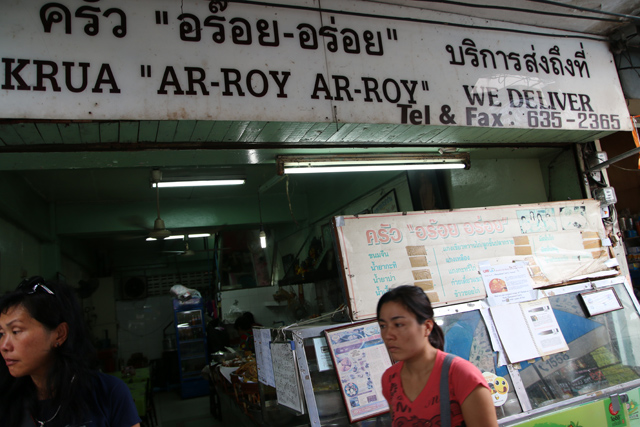 Perhaps the fame and location has led to Krua Aroy Aroy’s (ครัวอร๊อยอร่อย) fall of their dishes, because overall, it just didn’t hit the spot for me.

There are a couple dishes that were good like the massaman gai (มัสมั่นไก่ chicken massaman curry) and the khao soi (ข้าวซอย), and I didn’t have a chance to try the kanom jeen, which others have mentioned is quite good. If you’re looking for a good bowl of khao soi (ข้าวซอย) in Bangkok, it’s worth a try.

But I’d stay far away from the nam priks, and whatever you do… don’t order a plate of pad thai!

Also, it’s worth mentioning that the prices are about twice as much as what they should be in other areas of Bangkok.

Krua Aroy Aroy (ครัวอร๊อยอร่อย) is located on Thanon Pan, just off Silom road. It’s across the street from Wat Khaek Hindu Temple. Sometimes it’s a little hidden by hanging streams of yellow marigolds and street umbrellas, but if you walk along the sidewalk you’ll have no trouble finding it.