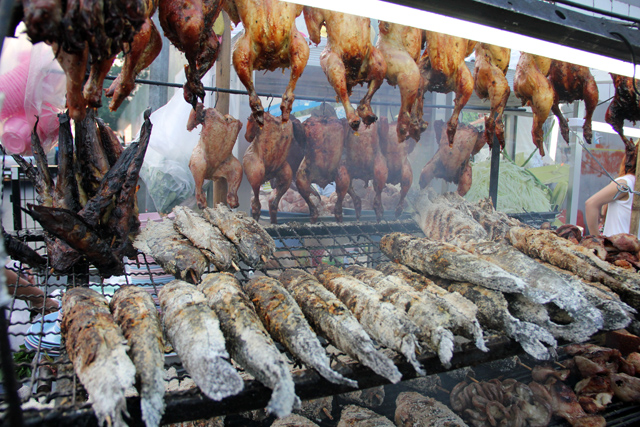 I think this Bangkok street stall is as photographed as the Grand Palace!

If you’ve spent time in Bangkok, or even if you’ve just visited for a few days, you’ve undoubtedly passed these street food stalls just outside Central World shopping center (เซ็นทรัลเวิลด์).

I’ve eaten here numerous times, but have just failed to write anything. So finally, here it is, one of the most popular and possibly the most easily accessible street restaurant in all of Bangkok: Ratchaprasong Thai Food (ราชประสงค์ ไทยฟู้ด). 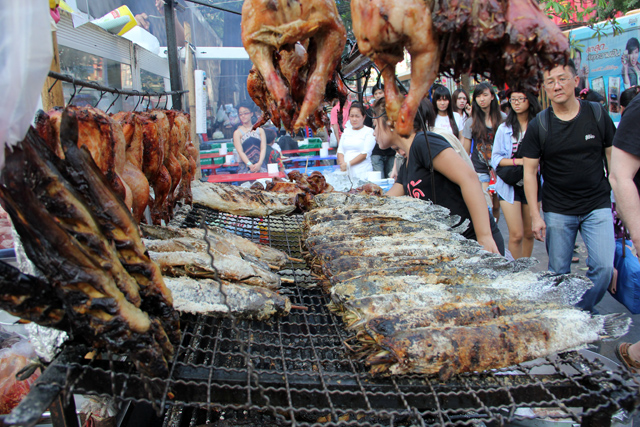 Thousands of pedestrians stop to admire this Thai street food!

Located in one of the busiest locations for foot traffic in all of Bangkok, the series of Thai street food restaurants just outside of Central World shopping center, attract the masses.

Everyday thousands upon thousands of tourists and locals as well make the trek from Siam to Pratunam market (video) area, passing, taking photos, and admiring the jaw dropping grills on display. 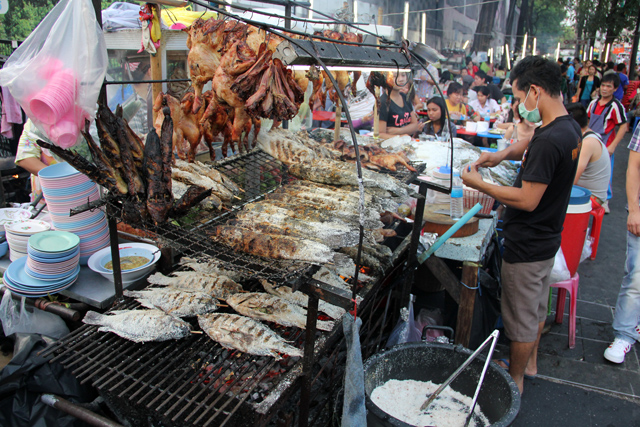 During the daytime, the section of sidewalk is filled with clothes vendors and small street food stalls, but starting at 5 pm each day, the scene shifts to much more impressive and tasty things.

There are about 5 or so restaurants that take control of the sidewalk, all of them serving just about the same menu.

I personally go to the first stall closest to Central World, known as Ratchaprasong Thai Food (ราชประสงค์ ไทยฟู้ด), mostly because the owner and the crew of staff are all extremely friendly. 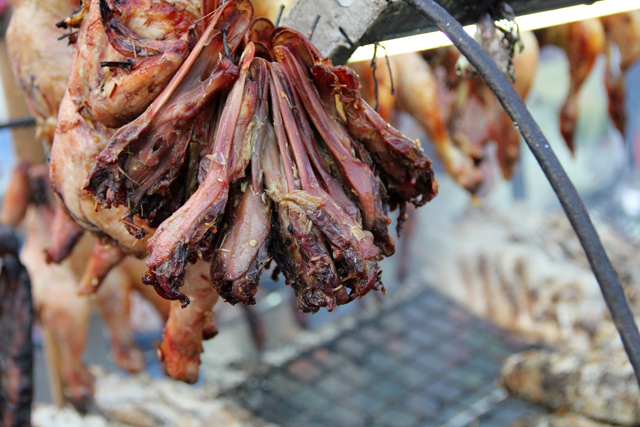 Among the selection on the menu are grilled duck beaks.

They don’t look that good, but they do make an exotic, and pleasantly tasty Thai dish. 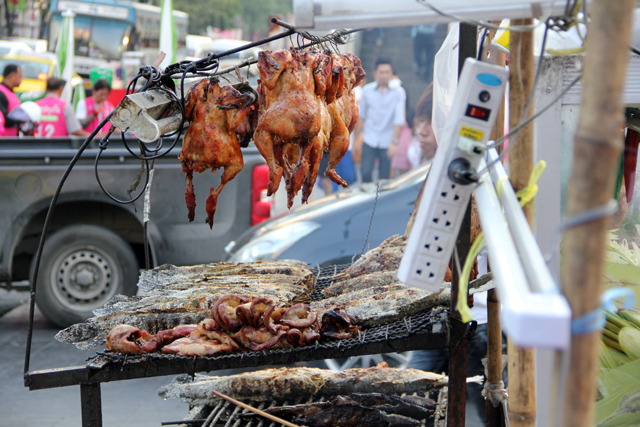 How could anyone not want to stop here and eat?

From the appearance of the street stall, one may assume that the chickens have been cooked by electrocution. However, they are most likely just grilled! 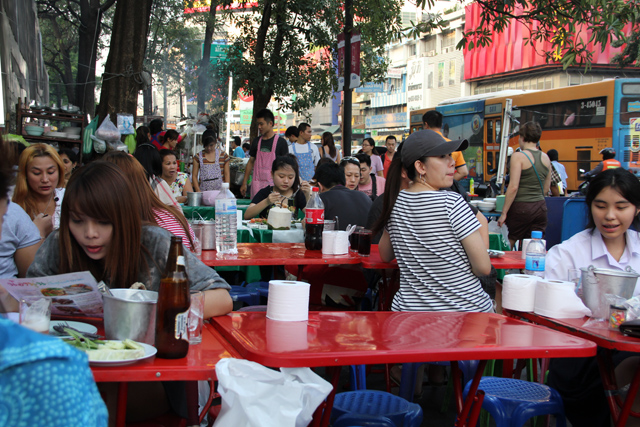 Classic Bangkok fold up tables are lined up along on the sidewalk cafeteria style.

It’s not exactly a peaceful dining experience; Traffic roars in all directions, pedestrians never stop, and both the heavy smoke from the grills and the fumes from the vehicles makes the air far from fresh. 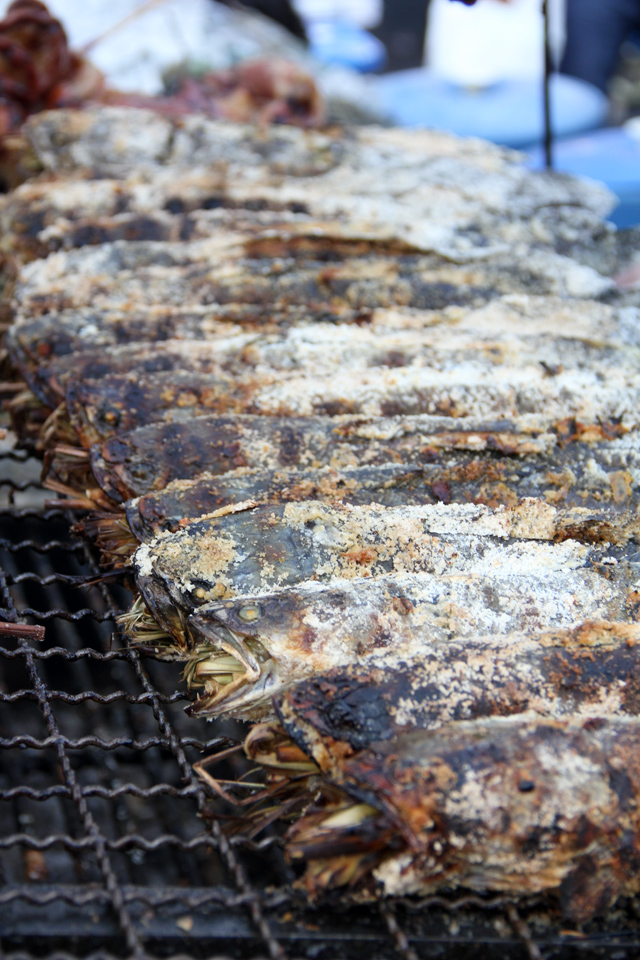 The main attraction for me is the grilled snakehead fish (pla chon pao ปลาช่อนเผา).

They are by all means not the most attractive creatures in the world, but what they lack in their looks, they sure make up flavor wise. 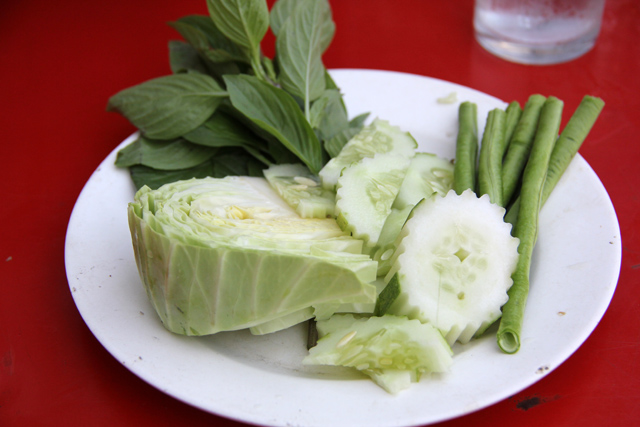 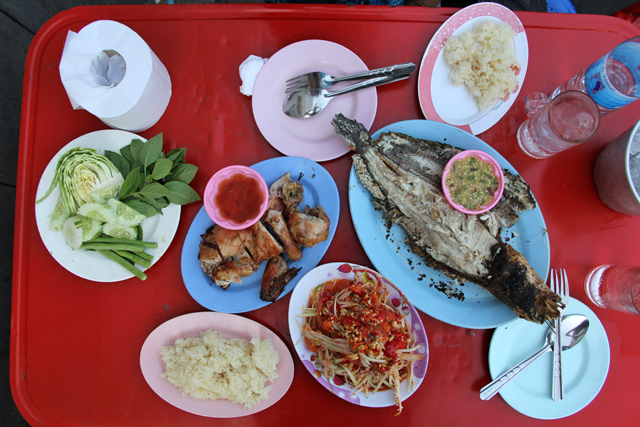 The meal from above

We went a little light, just ordering the basics, as I was most interested in eating a snakehead fish. 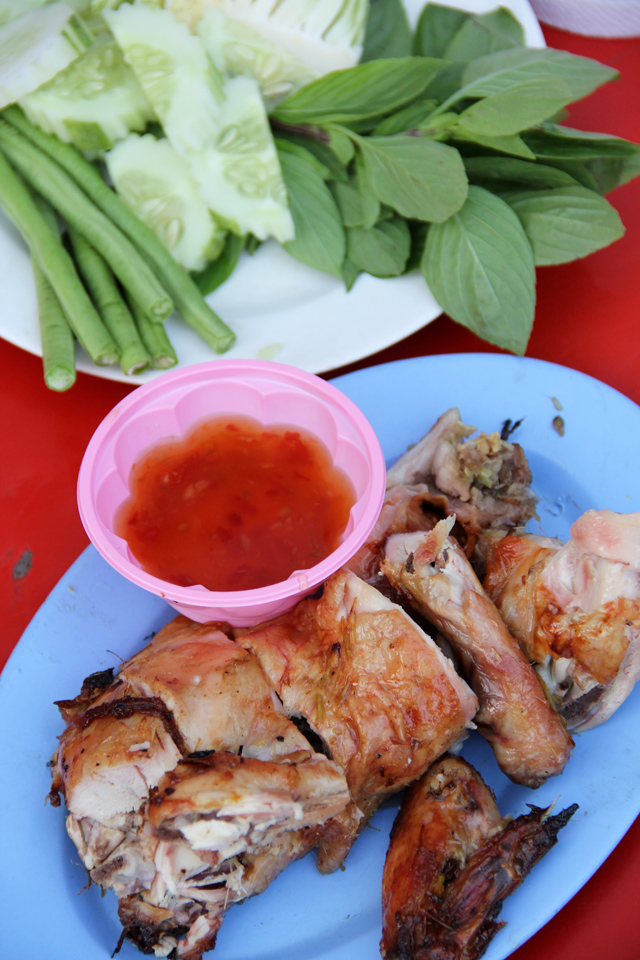 We also got a half a grilled chicken (gai yang ไก่ย่าง), which in my opinion was just a little dry (perhaps it got electrocuted?), not as good as the chicken from Sabai Jai Gai Yang.

That’s just sort of the luck of the draw when you eat Thai street food – I’m sure other chickens on the skewer were more juicy and moist.

Nevertheless, it was a good and meaty chicken for those that aren’t interested in the grilled fish. 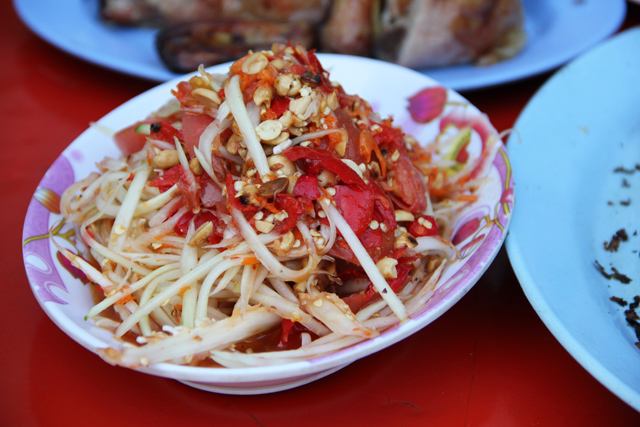 Som tam (green papaya salad ส้มตำ), is of course a must.

While I wouldn’t rate it as good as the som tam at Silom’s graveyard street stall, it’s pretty good.

Another great thing about Ratchaprasong Thai Food (ราชประสงค์ ไทยฟู้ด) is when you ask for spicy, they won’t fail to deliver. 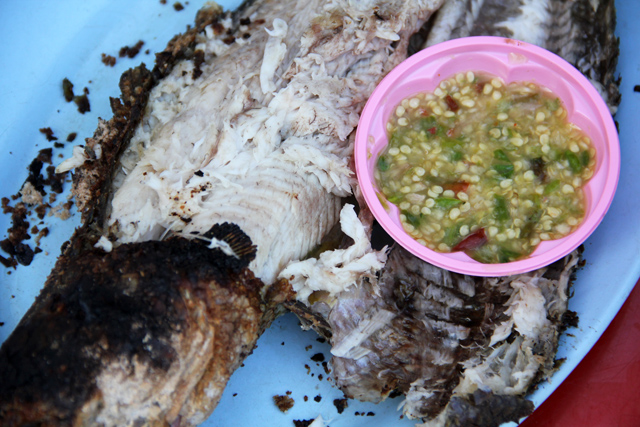 Stuffed full of lemongrass and rolled in salt before being slow roasted over the fire, the fish was excellent. It was moist, flaky, and the sauce was particularly wonderful.

Grilled fish and sticky rice is the best reason to go to the street food stalls outside of Central World! 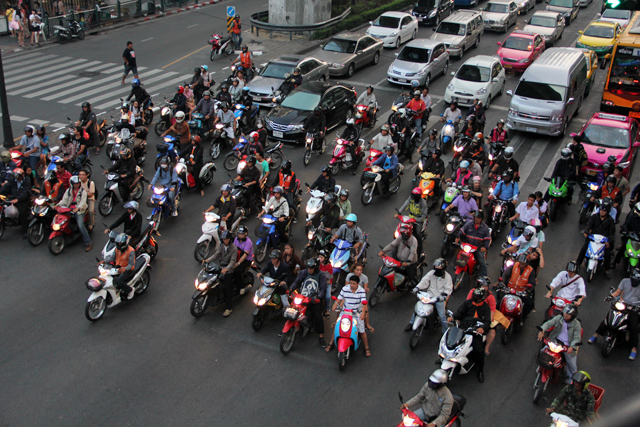 Here’s a quick shot of the traffic at 5:30 pm in Bangkok at Ratchaprasong intersection. 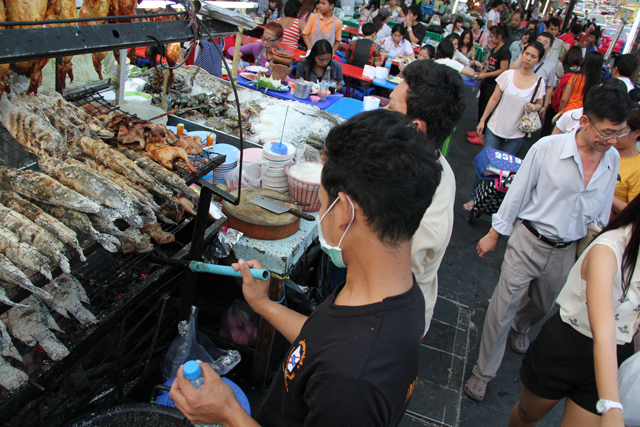 And here’s one last photo of the busy pedestrian sidewalk that flows right next to the hot grill. 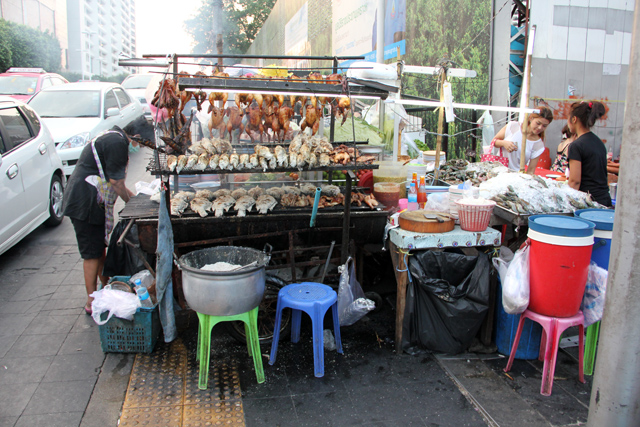 Here’s the video to go with this restaurant… I think you may be able to smell the roasting fish from the video!

Part of any street food dining experience is the ambiance, and the stalls outside of Bangkok’s Central World offer an extremely fast paced environment for a meal.

Like any business, it’s all about location, and they perhaps have the best Bangkok street food location. Also, their trophy grill packed with slow roasting creatures is simply irresistible, a Bangkok attraction in and of itself.

As for the food, it’s not the best in Bangkok, but it certainly is tasty Thai street food that’s very worth eating, and extremely convenient.

Like I mentioned above, there are about 5 different stalls to choose from, but I prefer the very first stall, which is closest to Central World. The staff is nice and friendly, and I think the food looks the best.

Hours: 5 pm – 2 am daily
Prices: 100 – 200 THB per person for a full meal, the meal we ate above came to 300 THB
Address: Sidewalk outside Bangkok’s Central World shopping center

Take the BTS to Chit Lom station, walk towards Ratchaprasong road and cross the street over to Central World. Walk all the way past Central World on your way to Pratunam, and it would be impossible to miss these Thai street food stalls (only begin at 5 pm).

Finally, here’s the full video of the restaurant, which you’re going to love (just press play below)!